Interesting Article: "The other red line" by The Economist, Washington, DC, published Saturday, May 18th, 2013 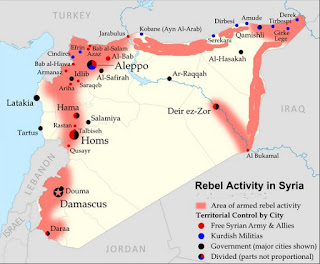 An interesting article mentioned that For all the agonizing in Western capitals about whether to channel weapons to “moderate” rebel militias in Syria and the renewed attempts to find a diplomatic solution to the civil war, one issue above all others is dominating the thinking of military planners, intelligence agencies and their political masters: the increasing danger of the regime’s vast stock of chemical weapons getting into the hands of groups with links to al-Qaeda. When reports surfaced last month about possible use of sarin, a nerve agent, by regime forces, supposedly crossing a red line drawn earlier by Barack Obama, the White House was keen to play the incidents down. If the use was small-scale and limited, of course it was deplorable and warranted rigorous investigation. It was not just that the evidence of what exactly had happened was regarded as insufficiently robust to prompt a response, but that the president’s red line (at least as far as it applied to forces loyal to President Bashar Assad) was really only supposed to relate to large-scale and systematic deployment of the terror weapons, which was still deemed unlikely and could anyway be deterred. A BBC report on May 16th that lethal chemical devices had been dropped by a helicopter on civilians near Aleppo seemed to confirm this red-line crossing, but still on a small scale. Would you like to know more?


Read more »
Posted by The Green Badge Solution at 11:57 AM No comments: