Salafist Terrorism on the Rise in Tunisia!

An interesting article mentioned that Tunisian security forces on Wednesday arrested five Salafist "terrorists" with links to two failed attacks in coastal resort towns, the first suicide bids in the country for more than a decade. The suicide bomber struck early on Wednesday at the four-star Riadh Palms hotel, in the resort town of Sousse, a popular tourist destination 140 kilometers (90 miles) south of Tunis. Within just half an hour, security forces foiled another suicide attack by an 18-year-old man on the tomb of former president Habib Bourguiba, in neighboring Monastir, 20 kilometers along the coast. Ministry spokesman Mohamed Ali Laroui said those behind the attacks belonged to Ansar al-Sharia, Tunisia's main Salafist movement, which the authorities have designated a "terrorist organization" with ties to Al-Qaeda. Would you like to know more?


Read more »
Posted by The Green Badge Solution at 10:04 AM No comments: 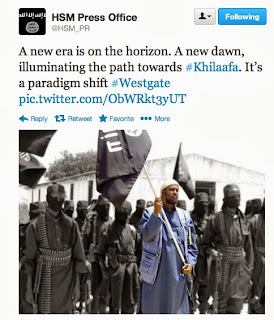 An interesting article mentioned that Puntland security forces raided al-Shabaab bases in Sugure village near the Golis Mountains on Saturday (September 28th), killing one militant and wounding three others, Somalia's Garowe Online reported. Puntland forces have recently scaled up their operations in the mountainous area, where the al-Shabaab-affiliated Golis Mountain Militia launches its attacks. Shabaab, which is often incorrectly described by some terrorism analysts as a local jihadist group interested only in taking control of Somalia, made clear in another tweet (via their press officer) that it is striving to implement a global Islamic Caliphate (Khilaafa): "A new era is on the horizon. A new dawn, illuminating the path towards #Khilaafa.” It's a paradigm shift.
While the double suicide attack in Uganda in the summer of 2011 and the group's oath of allegiance to al Qaeda in early 2012 should have made it painfully clear to analysts that Shabaab was part of the global jihad, the attack at Westgate is undeniable proof that Shabaab cannot be considered merely a local threat confined to Somalia.

Read more »
Posted by The Green Badge Solution at 11:27 AM No comments: