Update on the Rise of Terrorism in Syria!

Interesting Article: "The Syrian rebels who have ‘no problem’ fighting alongside Al Qaeda" by The National / Anakara Published Monday, November 25th, 2013 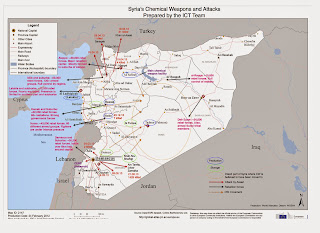 An interesting article mentioned that he Syrian rebel groups that Turkey has allowed to proliferate near its border include many who have said they have no problem fighting alongside Al Qaeda against the president, Bashar Al Assad. “Al Qaeda is helping us, while foreign countries are not,” said Besil Abu Arab, 20, a member of the Ahrar Al Sham militia, as he received treatment in a makeshift hospital in the Turkish border town of Reyhanli. Abu Imar Halebi, a fighter with the Aleppo-based movement Abu Amara, agreed that Al Qaeda fighters were an asset. He said he did not oppose their goal of establishing Islamic law in Syria, though his own group prefers to explain its benefits and win popular assent rather than impose it by force. Would you like to know more?

Read more »
Posted by The Green Badge Solution at 10:44 AM No comments: