October 03, 2011
Interesting Article: Dreaded militant hit squad goes rogue in Pakistan by MICHAEL GEORGY / Islamabad published Monday October 3, 2011
A recent article by Reuter’s journalist mentioned that an elite militant hit squad known as the Khorasan unit was hunting down and killing anyone suspected of helping the U.S, Pakistan and other military allies. Who are they? 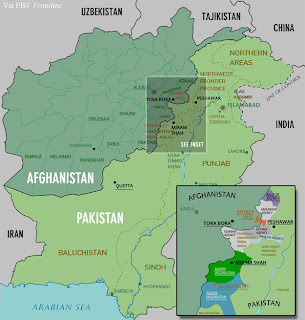 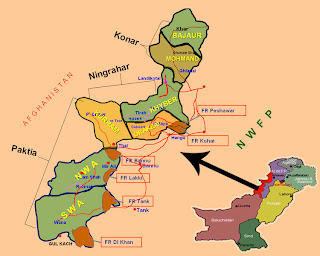 The Khorasan Unit (also known as Lashkar-e-Khorasan-the Army of the Khorasan) is named after a province of an old Islamic empire and is made up mostly of Arabs and Uzbeks. They are a shadowy group of several hundred men (estimated to be 300) who operate in North Waziristan. They operate primarily in the Datta Khel, Mir Ali, and Miramshah areas (see maps above). These three areas are strongholds of the Haqqani Network, Bahadar's Taliban forces and al Qaeda. Lashkar-e-Khoarasan was created from elements of the Haqqani Network and Bahadar's followers and they have supposedly captured about 120 people they've accused of being spies since 2009. According to new paper soruces, when suspected collaborators are caught, they are held in cells in a network of secret prisons across North Waziristan. A committee of Khurasan clerics decides their fate and most are declared guilty after being interrogated (i.e. tortured)."They are given electric shocks, or nails are hammered into their bodies." said one Khurasan operative according to journalist Michael Georgy. News of torture and executions carried out by the Khorasan spreads fast in the villages and small towns of North Waziristan. People believe members of the group -- who always have their faces covered and wear dark camouflage -- are capable of watching their every move. In January, the Lashkar-e-Khorasan was behind the beheading of almost half a dozen motor mechanics in Mir Ali after US officials changed their policy of hitting compounds and instead started targeting vehicles with Taliban leaders on board. The mechanics, mostly from Bannu district in Khyber-Pakhtunkhwa province, became a prey of the militants' outrage after they were blamed for placing chips in a Taliban Hilux car to make it a target for the US drones.  The Lashkar-e-Khorasan have also carried out the executions of alleged spies outside of North Waziristan. On Feb. 5, the Taliban executed four people accused of "spying for Indian and Jewish intelligence agencies" in the district of Karak, and on March 18, the Taliban executed a spy in Kohat. The thing with this group is that the Khorasan are not dependent on larger militant groups like Taliban (they fund their operations through kidnappings) and they are making it more difficult for the Pakistani army to persuade Pashtun tribal communities to form pro-government militias — a cornerstone of its counter-insurgency strategy. On Friday, senior Pakistani military officials complained to members of a North Waziristan pro-government militia that they were failing to improve security and that militants had formed a state within a state there. According to Bill Roggio, an expert in this arena, the Taliban's usage of the term "Khorasan" indicates that they are working in conjunction with al Qaeda in the effort to hunt down the spy network in North Waziristan. Al Qaeda's forces in Pakistan and Afghanistan are known as Qaidat al-Jihad fi Khorasan, or the Base of the Jihad in the Khorasan. It was in North Waziristan that the US killed Mustafa Abu Yazid, the leader of Al Qaeda in the Khorasan, in a Predator strike last summer. The Khorasan is a region that encompasses large areas of Afghanistan, Pakistan, Uzbekistan, Tajikistan, and Iran. The Khorasan is considered by jihadists to be the place where they will inflict the first defeat against their enemies in the Muslim version of Armageddon. The final battle is to take place in the Levant: in Israel, Syria, and Lebanon. Mentions of the Khorasan have begun to increase in al Qaeda's propaganda since 2007. After al Qaeda's defeat in Iraq, the group began shifting its rhetoric from promoting Iraq as the central front in its jihad, to the Khorasan. As stated in my previous post, the Haqqani Network is growing and will be a major player in this region in years to come, the fact that they have a special group working within the region to hunt down suspected U.S assets is a direct threat to successful security operations in that region.
References:
Nawazkahn, M. "PAKISTAN MINERAL DEVELOPMENT CORPORATION-FATA-DC PESHAWAR". GEOLOGICAL REPORT OF SHINKAI COPPER MINERALIZATION NORTH WAZIRISTAN AGENCY.
Roe, Andrew M. Waging War in Waziristan: The British Struggle in the Land of Bin Laden, 1849–1947 (Lawrence: University Press of Kansas, 2010) 313 pages
http://www.sunday-guardian.com/news/pak-taliban-forms-qvigilance-cellq-to-hunt-us-informers
"Taliban create Lashkar-e-Khorasan to hunt Predator spies" by Bill Roggio, March 28, 2011.