Indian Mujahideen and its operator in India!

An interesting entry by the Defence Forum Of India (DFOI) mentioned that Anti-Terrorism Squad (ATS), which is investigating the 13/7 Mumbai serial bomb blast case (2011 Mumbai bombings (often referred to as 13 July or 13/7) were a series of three coordinated bomb explosions at different locations in Mumbai, India, on 13 July 2011 between 18:54 and 19:06 IST. The blasts occurred at the Opera House, Zaveri Bazaar, and Dadar West localities, leaving 26 killed, and 130 injured) believes that frontline terrorist of Indian Mujahideen (IM) - Yasin Bhatkal alias Shahrukh was in Mumbai during the blast and could have carried out the three massive explosions. ATS has launched a search operation across the country as there are firm indications that Bhatkal has not left the country. Moreover, Bhatkal is wanted in several blast cases since 2005. So who is Yasin Bhatkal and the Indian Mujahidin? 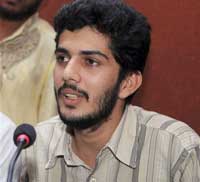