An interesting article the Guardian mentioned that Iran has begun uranium enrichment at an underground site built to withstand possible air strikes. The operations at the bunker-like Fordo facility south of Tehran, reported by the Iranians, are small compared with Iran's main enrichment site. But the centrifuges are considered more efficient and are shielded from aerial surveillance and protected against air strikes by up to 90 meters of mountain rock. Uranium enrichment is at the core of the international standoff over Iran's nuclear program. The US and its allies fear that Iran could use its enrichment facilities to develop high-grade nuclear material for warheads. Iran claims it only wants nuclear reactors for energy and research. The Kayhan, which is close to Iran's ruling clerics, said engineers had begun injecting uranium gas into sophisticated centrifuges at the Fordo facility near the city of Qom. Iran has a major uranium enrichment facility in Natanz where nearly 8,000 centrifuges have been operating since 2006. So what more information is there about this? 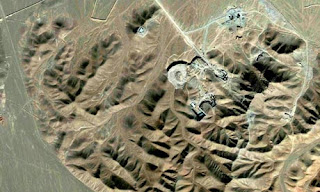 The country has been enriching uranium to less than 5% for years but began raising this to nearly 20% from February 2010, saying it needed the higher grade material to produce fuel for a Tehran reactor that makes medical radioisotopes for cancer patients. Weapons grade uranium is usually about 90% enriched. Iran says enrichment to nearly 20% will be carried out at Fordo. This is of particular concern to the west because such a concentration can be converted much more quickly for use in a nuclear warhead. Built next to a military complex, Fordo was long kept secret and only acknowledged by Iran after it was identified by western intelligence agencies in September 2009. It is a hardened tunnel protected by air defense missiles and the Revolutionary Guard. Diplomats on Monday confirmed the report that Iran has begun uranium enrichment at an underground bunker (see picture on right) and said the news is particularly worrying because the site is being used to make material that can be upgraded more quickly for use in a nuclear weapon than the nation’s main enriched stockpile. The diplomats said that centrifuges at the Fordo site near Iran’s holy city of Qom are churning out uranium enriched to 20 percent. That level is higher than the 3.5 percent being made at Iran’s main enrichment plant and can be turned into fissile warhead material faster and with less work. But with the time and effort reduced between making weapons-grade uranium from the 20-percent level, the start of the Fordo operation increases international fears that Iran is determined to move closer to the ability to make nuclear warheads — despite insistence by the Islamic Republic that it is enriching only to make reactor fuel. Its dismissal of findings by the International Atomic Energy Agency of secret experimental work on a nuclear weapons program also worries the international community. The facility is a hardened tunnel and is protected by air defense missile batteries and the Revolutionary Guard. The site is located about 20 miles (32 kilometers) north of Qom, the religious nerve center of Iran’s ruling system. The semiofficial Mehr news agency quoted Iran’s nuclear chief, Fereidoun Abbasi, as saying Sunday that “the enemy doesn’t have the ability to damage it.” 348 machines were operating at Fordo in two cascades — the linked up configuration needed to enrich. Two other cascades were nearly assembled but not working, they said. The centrifuges appeared to be the standard old-generation machines in use at the main enrichment site at Natanz and not advanced more efficient prototype versions. In an interview broadcast Sunday, U.S. Defense Secretary Leon Panetta said Iran is laying the groundwork for making nuclear weapons someday, but is not yet building a bomb. Panetta reiterated U.S. concerns about a unilateral strike by Israel against Iran’s nuclear facilities, saying the action could trigger Iranian retaliation against U.S. forces in the region. President Barack Obama approved new sanctions against Iran a week ago, targeting the central bank and its ability to sell petroleum abroad. The U.S. has delayed implementing the sanctions for at least six months, worried about sending the price of oil higher at a time when the global economy is struggling. The U.S. and Israel have said that all options remain open, including military action, should Iran continue with its enrichment program. Western experts say tightening sanctions, technical hurdles and possible cyber sabotage have slowed Iran’s atomic advances. But it is unclear whether Tehran, subject to increasingly strict international sanctions restricting its ability to obtain nuclear technology abroad, has the means and components to make the more sophisticated machines in bigger numbers. “We should not overestimate the progress,” one diplomatic source said, adding that Iran had tried to develop more modern centrifuges for several years. With Iran's push to go nuclear, 2012 should be a year of action by the west to further reduce their abilities to have a running nuclear facility.