An interesting article mentioned that according to U.S Officials, the Iraqi branch of al-Qaeda, seeking to exploit the bloody turmoil in Syria to reassert its potency, carried out two recent bombings in the Syrian capital, Damascus, and was probably behind Friday's suicide blasts that killed at least 28 people in the largest city, Aleppo. The officials cited US intelligence reports on the incidents, which appear to verify Syrian President Bashar al-Assad's charges of al-Qaeda involvement in the 11-month uprising against his rule. The Syrian opposition has claimed that Dr Assad's regime, which has responded with massive force against the uprising, staged the bombings to discredit the pro-democracy movement calling for his removal. The international terrorist network's presence in Syria also raises the possibility that Islamic extremists will try to hijack the uprising, which would seriously complicate efforts by the US and its European and Arab partners to force Mr Assad's regime from power. Would you like to know more? 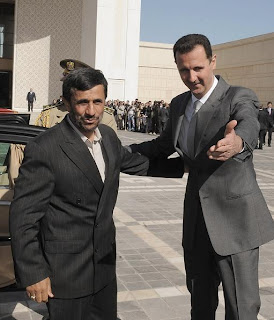 On Friday, President Barack Obama repeated his call for Assad (see picture of right) to step down, accusing his forces of ''outrageous bloodshed''. The US intelligence reports indicate that the bombings came on the orders of Ayman al-Zawahiri, the Egyptian extremist who assumed leadership of al-Qaeda's Pakistan-based central command after the May 2011 death of Osama bin Laden. They suggest that Zawahiri still wields considerable influence over the network's affiliates despite the losses the Pakistan-based core group has suffered from missile-firing CIA drones and other intensified US counterterrorism operations.

''This was Zawahiri basically taking the shackles off,'' said a US official with access to the intelligence reports.

US officials believe that the Sunni Muslim al-Qaeda in Iraq, or AQI, was looking to expand beyond Iraq, where it has been stepping up attacks on majority Shiites. Dr Assad's regime is dominated by Alawites, a minority Shiite Muslim sect that has ruthlessly ruled the Sunni Muslim-majority country since Dr Assad's father seized power in 1963. "This has less to do with the targets and more to do with the opportunity," the US official said. The first Damascus attack occurred on December 23, when suicide bombers detonated cars packed with explosives outside intelligence agency compounds in the Syrian capital. At least 44 people were killed and more than 160 wounded. Then, on January 6, at least 26 people were killed and dozens injured in a bombing against a second intelligence agency compound

As regime forces continued pummeling the opposition stronghold of Homs on Friday, two suicide bombers driving explosives-packed vehicles attacked security compounds in Aleppo, killing at least 28 people. It was the first significant violence to strike the commercial centre, which has largely remained loyal to Assad. For 10 months, the world has watched in horror as President Bashar Assad’s regime has carried out regular massacres against unarmed civilians across Syria in a bid to quell the unrest gripping the country. No doubt inspired by the successes of their Arab brethren elsewhere, thousands of Syrians have staged protests asking that their rights and dignity be respected.

Although the regime has vacillated between intensifying its crackdown and feigning interest in meeting some demands of its people, it’s clear that Assad is not likely to follow the example of Egypt’s President Hosni Mubarak or Tunisia’s President Zine al-Abidine Ben Ali by stepping down.

As the violence continues, the international community might have no choice but to usher Assad out, as was done with Libya’s Moammar al-Gaddafi. Otherwise, Al-Qaeda could come back from the precipice.

Syria has long had ties to militant groups including Hezbollah, Hamas and the Palestinian Islamic Jihad. Only a few years ago many thought of Syria as a main conduit through which foreign Sunni militants entered Iraq. Whether Al-Qaeda has established a foothold in Syria may not be clear for some time, and in some ways, it is immaterial. A combination of brutality, arrogance and short-sightedness by Assad’s regime has furnished Al-Qaeda with a treasure-trove of ready-made recruitment material which could potentially galvanize militants across the Muslim world. As important, the Syria narrative may also resonate with moderate Muslims who will find it difficult to criticize Al-Qaeda’s attacks if they target the regime exclusively. Sunni-majority nations, a number of which have strongly condemned the Syrian regimes’ repression, may not try to stop such an outflow. Recent reports indicate that some Iraqi Sunni militants have called on their cohorts to join the jihad in Syria. The death of a Saudi who took part in a protest was well publicized. It won’t be difficult for Al-Qaeda or other militant groups to exploit the perception among many that the devastation befalling Sunni Muslims is being perpetrated mostly by Alawites, Druze and Christians.

One must remember that hundreds of Arab men left everything behind and traveled to Afghanistan to fight a conflict billed as the ultimate jihad in the 1980s. Likewise in Iraq, Arabs from Sunni-majority nations went to fight the Americans and their Shiite Safavid allies who were also portrayed as conspiring against Sunnis. In both these conflicts, however, foreign militants were motivated by narratives not corroborated nearly to the same extent as Syria’s will continue to be. Hours of amateur footage documenting the Shabbiha’s brutality could make Al-Qaeda’s pitch an easy sell.
Al-Qaeda gained traction by pointing to the Russians in Afghanistan as a faceless symbol of godless communism. Even in Iraq, no single Shiite figure was widely reviled – although of late Prime Minister Nouri al-Maliki has become a polarizing figure. Assad, though, is a target of Arab ire, with scores of participants on Internet forums daily wishing him a “Gaddafi ending.” Detractors rarely refer to him by his first or last name; many simply call him “Al-Taghiya,” the Tyrant.

Jihadist circles have been abuzz lately with speculation that the Syrian authorities may have released Mustafa Setmariam Nasr, better known as Abu Musab al-Suri, a top Al-Qaeda theoretician. There is no confirmation that he has been released – indeed it has never been publicly confirmed that Nasr was being held in Syria in the first place. Still, if the Internet rumors are true, it would underline the Syrian regime’s troubled and complex history of dealing with militant Sunni Islamists.

Nasr is ranked No. 4 in the Al-Qaeda leadership and is wanted by Interpol for his alleged role in the 2004 Madrid bombings. Releasing him may upset the U.S., but also would weaken the regime’s claim that it lists Al-Qaeda and its affiliates as a mortal enemy, blaming them for the recent suicide bomb attacks in Damascus that left 70 people dead. Last August, the Shumoukh al-Islam online forum posed a brief note that purported to confirm that Nasr was in a jail in the General Intelligence headquarters in the Kfar Susa neighborhood of Damascus.

Al-Qaeda also clearly stated its support for the Syrian opposition against the Assad regime. In a videotaped message issued last July, Ayman al-Zawahiri, Al-Qaeda’s leader, applauded Syrian anti-regime protesters. As the violence has steadily worsened, some commentators on jihadist websites are openly calling for waging a jihad against the Assad regime. In November, Osama al-Shehabi, the leader Damascus was repeatedly accused of facilitating the transfer of foreign fighters from Syria into Iraq following the 2003 U.S.-led invasion of Iraq. Syria’s denials notwithstanding, the seizure by U.S. troops in October 2007 of an Al-Qaeda database recording details of nearly 700 Arab fighters – over 90 percent of whom were non-Syrians – showed that all of them had entered Iraq from Syria, even though explicit evidence of regime complicity was absent.

Similarly, the Syrian regime is thought to have helped dispatch Islamist militants into Lebanon in late 2006 in an attempt to destabilize the then-Western backed government of Prime Minister Fouad Siniora.

If the international community does not take a firm stand now, it could find itself having to choose between supporting a brutal regime that has killed thousands of its own people or allowing Al-Qaeda to turn Syria into a staging ground where it could recover from massive losses suffered in recent years but also potentially create a new generation of militants.

At the very least, Syria could reinforce Al-Qaeda’s narrative – which maintains that Muslims the world over are under siege – giving it a much needed boost, at a time when the terrorist group is desperate to regain its footing.