An interesting article mentioned that a former member of the Muslim Brotherhood is the best of the Egyptian presidential candidates to have emerged so far, according to a high-profile Islamic cleric has said, support that could help his chances in the race to become the next head of state. Sheikh Yousef al-Qaradawi, an Egyptian cleric based in Qatar, described Abdel Moneim Abol Fotoh as the "leading candidate" from a field including former Arab League Secretary General Amr Moussa, a liberal and former foreign minister. Would you like to know more? 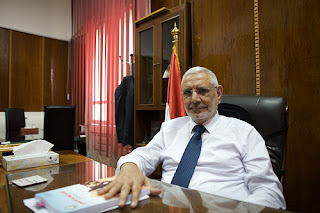 Though it is hard to say how much sway Qaradawi could have over the public at large, his remarks could influence those voters sympathetic to the Islamist groups which dominated recent parliamentary elections, including supporters of the Muslim Brotherhood, which is not contesting the presidency. The election to decide who will be the first president of the post-Hosni Mubarak era will be held in late May, state newspaper al-Ahram quoted a government minister as saying on Wednesday. The ruling military council is due to hand power to the new head of state at the end of June.

One of the most widely respected Sunni Muslim clerics in the Arab world, Qaradawi is a former member of the Muslim Brotherhood seen as close to the group but independent of it. He is a household name in the Arab world thanks to his regular appearances on the Qatar-based Al Jazeera channel. The Brotherhood's decision not to field its own presidential candidate is part of an effort to ease the concerns of those at home and abroad worried about Islamist domination of the post-Mubarak era.

The group has also said it will not back any of the other Islamists who are seeking the presidency, a stance that would appear to rule out its backing for Abol Fotoh, 60 (see picture above). His decision to run for the presidency resulted in expulsion from the Brotherhood. His departure from the group last year was the culmination of years of friction with other members of the Brotherhood leadership.
In terms of Abdel Fotoh, born on 15 October 1951 in The old Cairo region to a family which was originally from the Gharbia Governorate. He graduated from Cairo University School of Medicine with honors in 1976 and received a Bachelor's Degree of Law from the same university.

He attained a master's degree in hospital management from the Helwan University's Faculty of Commerce. Fotoh was a prominent student leader in the 1970s and coordinated with other students, including Essam Al Eryan and Ibrahim El Zafarany, to facilitate the entry of the many small Islamic organizations into the Muslim Brotherhood. For many years, he was a member of the Muslim Brotherhood and served on its Guidance Bureau. He has been called "one of the Brotherhood's most respected members" but was expelled in 2011 for refusing to relinquish his independent presidential campaign. He is also the secretary-general of the Arab Medical Union.

Fotoh is known for his liberal and open minded views and as a leader within the Muslim Brotherhood, Fotoh claims that he worked to ensure that the ideas of the Muslim Brotherhood conformed to democratic principles. Fotoh declared on the BBC that the source of true power and legislation was not in a law or constitution but in the people.

On the other front as 16 U.S. citizens await trial in Egypt for accepting foreign financing to promote democracy, for the first time in more than 30 years there is a serious debate in Washington about whether to end the $1.3-billion annual military assistance to Cairo. There's no debate in Egypt, however. More than 70% of Egyptians, according to a recent Gallup poll, no longer want U.S. funding. By deciding to prosecute Americans, post-Mubarak Egypt has intentionally provoked a bilateral crisis. But the legal assault on U.S.-funded nongovernmental organizations and personnel is merely a symptom of a larger, more serious problem. In Egypt today, all major political forces — the ruling Supreme Council of the Armed Forces, or SCAF, the Muslim Brotherhood and the government — are embracing anti-American populism.

In this environment, prospects for democracy in Egypt appear slim. Worse, with reportedly as little as $11 billion remaining in foreign reserves depleting at a rate of $2 billion a month, Egypt is on the precipice of an economic crisis. At the same time, a spate of kidnappings in Cairo and mob violence at a Port Said soccer match this month, which killed more than 70 people, point to a deteriorating security situation.

The Egyptian government is currently negotiating loans to the tune of $1 billion dollars from the International Monetary Fund, and plans to sell bonds worth $2.5 billion. According to the estimates of Egyptian economists, the state needs some $11 billion dollars in order to recover from the damage done so far as a result of the revolution.

In his annual budget message to Congress, President Barack Obama asked that military aid to Egypt be kept at the level of recent years -- $1.3 billion -- despite a crisis triggered by an Egyptian probe targeting American democracy activists.

Egypt has long been among the top recipients of U.S. aid, getting about $1.6 billion annually, mostly in military assistance. In fiscal 2012, $250 million of aid approved for Egypt was economic; $1.3 billion was military and there was a $60 million "enterprise fund" approved by Congress.

No U.S. assistance is moving to Egypt at the moment, U.S. lawmakers and their aides said last week. Some legislators favor cutting off aid to Egypt entirely if it does not drop accusations against American democracy activists and lift a travel ban on them.

But instead of concentrating on security and economics, in a classic case of Nero fiddling while Rome burns, the civilian government of Egypt appointed by SCAF is focused on trying the American staff of U.S.-funded NGOs that promote democracy. The allegations against them are a politically driven and incendiary distraction, unmistakably conceived by the SCAF-appointed minister of planning and international cooperation, Fayza Mohamed Aboulnaga, who has emerged as a symbol of the new populist politics of post-revolution Egypt.

On top of all these events, this month, a senior Muslim Brotherhood official published an open letter invoking the "American-Zionist" conspiracy and warning that U.S. democratization funds had been channeled to "suspicious institutions." Going one step further, the Brotherhood's more militant cousin, the Salafist party Al Nour, accused the American NGOs of trying to "create discord between the Muslim Brotherhood and the Salafis." Based on the court documents, one Al Nour official observed, the NGO workers "can be considered spies."

As the elections for the Upper House of the Egyptian parliament go ahead slowly and with low participation rates, the Muslim Brotherhood announced their willingness to form the next government, and even prepared a list of candidates for top government positions.

According to a document publicized on Wednesday in the Egyptian media, the man up for the role of prime minister is the engineer Khairat Al Shater, deputy of the “General Guide” – the leader of the Muslim Brotherhood. He will be joined in the administration by 16 ministers, who are members of the Muslim Brotherhood, and who would hold portfolios including foreign affairs, housing, economy, tourism and health. According to the list, the education portfolio will go to the Salafi Al Nour party, if it agrees to join a coalition government.

Meanwhile, the heads of the party announced that their central conditions for joining a coalition is that the military budget be subject to parliamentary control, a condition which the military is opposed to, and which it is unlikely that the Muslim Brotherhood insist upon. The defense and military industry portfolio will be in the hands of the military representative, which will most probably be General Mohamed Al Assar, who is supported by the Muslim Brotherhood. The interior affairs portfolio, which also includes home security, will go to someone who is not a member of the Islamist movement.

Facing extreme challenges at home and in need of distractions, anti-Americanism has become Cairo's preferred populist recourse. Although a solution might be found for this particular controversy — with or without U.S. foreign assistance — this bilateral dynamic assures that the next crisis is not far off.