An interesting article mentioned that Algerian security forces have found a large cache of weapons, including shoulder-fired missiles, which they believe were smuggled in from neighboring Libya. The find follows warnings from governments in the region that instability in Libya after the end of Muammar Gaddafi's rule is allowing weapons taken from Gaddafi's arsenal to fall into the hands of al Qaeda's North African branch and other insurgent groups across the Sahara desert. The weapons cache was discovered in the desert about 60 km (40 miles) south of In Amenas, an energy-producing Algerian region near the border with Libya, said the source, who spoke to Reuters on condition of anonymity. Would you like to know more? 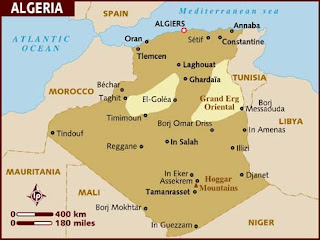 The source said the cache was located following a tip-off from a smuggler who had been arrested. He said it contained a "large quantity" of arms including the shoulder-launched missiles - a weapon which, in some variations, could be used to bring down an aircraft. Western security experts tracking arms which have disappeared from Gaddafi's looted arms depots say the shoulder-fired missiles - also known as man-portable air defense systems, or MANPADS - are one of their biggest concerns because they could be used with relative ease by insurgent groups.

Gaddafi's forces had about 20,000 of the missiles, according to a U.S. government task force which is trying to locate the missiles. The task force says most of the missiles are still inside Libya, in the hands of militias loosely allied to the interim leadership that took over after Gaddafi's rule was overthrown last year. Security officials in North Africa say the worst-case scenario is that al Qaeda's North African wing, al Qaeda in the Islamic Maghreb (AQIM), could use one of the missiles to bring down a commercial airliner coming in to land or taking off at an airport somewhere in North Africa. Al Qaeda in the Islamic Maghreb is also active in desert regions straddling the borders of Algeria, Mauritania, Mali and Niger.

The weapons were buried in the sand and discovered at an unspecified date thanks to information provided by smugglers operating in the area.

Such missiles require no specific training to operate and maintain and can be used to shoot down planes or helicopters in mid-air, the newspaper said.

"SAM-7 missiles are a serious threat to civil aviation. They can strike aircrafts flying at an altitude of 11,000 to 13,000 feet," El Watan said, quoting an anonymous official.

Algeria has been one of the region's most vocal states in warning of the security impact of Gaddafi's fall. The revolt has left huge quantities of weapons unsecured and a fragile interim government that is struggling to impose its authority and control the country's borders.

On February 9th, Algeria and Libya signed an agreement to crack down on an illicit cross-border arms trade that has boomed following the fall of late Libyan leader Muammar Gaddafi, according to an Algerian news report. According to government intelligence, the arms entering Algeria come from the Libyan arsenals raided after rebels took the capital Tripoli putting an end to 42 years of Gaddafi rule, Algerian newspaper Ennahar reported on Thursday.

A United Nations report in January said armed groups like Al-Qaeda and Boko Haram in African countries like Niger, Chad and Nigeria could have access to stolen large arms like missile launchers. Algeria is aware that a border closure with the neighboring Morocco is no longer a wise choice in the light of the earthshaking metamorphose that swept the MENA (Middle East and North Africa) region and led to the fall of ozymandias like potentates in Tunisia, Egypt, Libya and Yemen, respectively.

On February 13, Tunisia said it had broken up a "terrorist organization" with links to al Qaeda and arrested 12 members, some of whom had received military training in Libya and were seeking to set up an Islamic state. It was not immediately clear whether the group were plotting any specific attacks but the government said they were connected to a handful of fighters who clashed with Tunisian security forces in the eastern port city of Sfax this month. Tunisian forces killed two gunmen and captured a third.