An interesting article mentioned that a separatist movement is growing in Kenya.  Near the white sandy beaches along Kenya's coast where tourists sip cocktails in the sun, graffiti scrawled on walls proclaims 'Pwani si Kenya' or 'The Coast is not Kenya'. The Swahili slogans are a call by an outlawed group for the coastal region, including a booming tourist industry and Mombasa, Kenya's oldest city and biggest port, to secede from East Africa's largest economy. Would you like to know more? 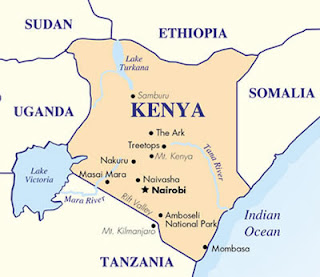 The separatist message preached by the Mombasa Republican Council (MRC) has spread through mosques, churches, markets, coffee houses, text messages and Facebook. MRC wants the coast, where centuries of Arab trade and influence left their mark and minarets show the predominance of Islam, to have its own flag, currency and president. The campaign taps into deep local grievances over land ownership and employment being in the hands of outsiders, who have settled at the coast over the years from other regions of Kenya, west of the contested coastal belt. The outlawed group's partisans, believed to number thousands, say while the coast is a jewel in Kenya's economy, many locals remain jobless and landless. Local schools and hospitals are run down and roads pitted with potholes. The MRC takes its name from Mombasa, the commercial hub of the coast and Kenya's second-largest city after Nairobi (see map on right). Mombasa draws tourists to its sun-drenched beaches and quaint old town, with its winding streets and Arab architecture of ornately carved doors and window frames.

In March, police at the coast arrested people it said were MRC members when they disrupted a mock poll exercise in Malindi, a tourist haven at the coast, injuring officers. Mwamnwadzi denied issuing orders for the attack. The following month, a man said to be a supporter of the MRC was killed after being hit with a rock by a fellow protestor when dozens of its members stormed a Mombasa court hearing a case in which the separatists want to reverse a ban on its activities. MRC says it has documents of a 1963 accord signed by then Kenyan Prime Minister and later President Kenyatta and his Zanzibar counterpart Mohamed Shante, granting Kenya a 50-year lease over the coast. This would expire in June 2013, so returning the region to its indigenous people, the MRC argues. Kenyan officials say MRC is infiltrated by fighters from al Qaeda-linked Islamist militant group al Shabaab, which has waged a five-year insurgency against Somalia's government since 2007. Kenyan security agents investigating the origin of the group, formed in 1999, believe it is backed by wealthy Arabs.

These security sources say the shadowy backers are reported to be based at the coast, around Africa and in the Middle East. They pay for the MRC's legal fees and also post bail to free members of the group arrested by police. Any trouble on the coast could badly hit Kenya's multi-million-dollar tourism industry, already damaged by the kidnappings of Western female tourists from beach resorts at the coast by Somali gunmen.

The violence is growing by the day. The International Christian Concern (ICC) has learned that that suspected members of the Islamic radical group, Al-Shabaab, attacked two churches and killed 17 Christians in Garissa, Kenya today. The attacks took place during the Sunday morning worship services of the churches. The Islamists killed two policemen guarding the African Inland Church before entering the church. Then they threw grenades at the Christian worshipers and shot at them, killing 15 members of the church. In an apparently coordinated attack, the Islamists also threw grenades at the town’s Roman Catholic Church.

According to the reports from ICC-Muslim radical groups are quietly waging jihad war against Christians in Africa. Multiple attacks have taken place in 2012 alone as radical Islamic groups fight to implement a strict form of Sharia law over several countries.
Islamic extremism is rampant in Kenya, according to the ICC, primarily through the hands of the radical Islamic group Al-Shabaab. In March, a grenade was thrown into the center of an outdoor worship service killing two and injuring over 30 Christians. Two more churches were attacked during their worship services in July. These attacks, carried out by Al-Shabaa, resulted in the death of 17 Christians.

Very recently, Tony Blair, after September 11, now thinks he underestimated the power of the bad ''narrative’’ of Islamist extremists. That narrative – that ''The West oppresses Islam” – ''is still there. If anything, it has grown.’’ It seeks ''supremacy not coexistence’’. He fears that ''The West is asleep on this issue’’, and yet it is the biggest challenge. In Africa, all the good things he sees through his Africa Governance Initiative face ''this threat above all others’’. In ''Sudan, Mali, Nigeria, outbursts in Tanzania and Kenya’’, sectarian Islamist extremism is the great and growing problem.

The U.S is ramping up efforts to help the Kenyan government, the Pentagon plans to provide small drones to Kenya, part of a new package of military assistance for key African partners to combat al Qaeda and al Shabaab militants in Somalia. Kenya will get eight hand-launched Raven drones with sensors used to pinpoint targets, according to Pentagon documents reviewed by The Wall Street Journal. Ravens are unarmed but can be used to identify targets for strikes using ground forces or armed aircraft. The Ravens for Kenya are part of an initial $41.4 million package of military aid that also includes trucks, communications gear and rifles for Burundi, Djibouti and Uganda. The U.S. provided Ravens to Uganda last year, according to officials and documents.

The attack by suspected Islamist militants on two churches in eastern Kenya on Sunday, in which the assailants killed 17 people and wounded 60 more, is more bloody confirmation of the emergence of African terrorist groups. A group of seven masked men threw grenades into the Catholic Church and African Inland Church in Garissa, close to the Somali border, then opened fire with assault rifles. Though no group has claimed responsibility, it is the latest incident after a series of attacks carried out by Islamist militants across Kenya that have killed close to 60 people.

The episodes began after Kenya invaded Somalia last September in pursuit of the Somali guerrilla group al-Shabab. For years Western terrorist hunters have war-gamed a scenario whereby al-Qaeda, pressed in Afghanistan and Pakistan, tries to establish a new staging ground in the Sahara and the Sahel, the band of lawless desert and scrub running east to west across Africa. According to the theory, al-Qaeda would likely try to extend its franchise to three indigenous African groups: al-Qaeda in the Islamic Maghreb (AQIM) in Algeria, Mali and Niger; Boko Haram in northern Nigeria; and al-Shabab in Somalia.

Theory is now becoming reality. After gestating for years, all three groups now present a real threat. Formerly a mostly criminal enterprise kidnapping foreigners for million-dollar ransoms, in the past year AQIM strengthened its arsenal with weapons smuggled out of the collapse of Muammar Gaddafi’s Libya, then piggybacked on a Tuareg rebellion in northern Mali so effectively that it and its fellow Islamists now control a de facto new state. (In a move similar to the Afghan Taliban’s demolition of Buddhist statues, some of the militants have now set about destroying “idolatrous” Sufi shrines in the ancient city of Timbuktu.) In Nigeria, most of Boko Haram’s attacks have a local focus — the security forces, state institutions, churches — but a faction has emerged with bigger ambitions, as it demonstrated with a suicide car-bomb attack on Aug. 26 last year on the U.N.’s headquarters in the Nigerian capital, Abuja, which killed 24 people and injured 115.

Will Islamist insurgencies in Nigeria and Kenya — the economic powerhouses of West and East Africa — wreck Africa's nascent economic growth, just as the continent struggles to emerge from poverty and conflict? The Arab Spring seems to make al-Qaeda far less relevant, but does this coalescing threat make Africa a new battlefield in the fight against terrorism? The officer who heads Washington's Africa Command (Africom) thinks so. On Sept. 14, General Carter Ham told reporters in Washington: "If left unaddressed, you could have a network that ranges from East Africa through the center. Those three organizations have very explicitly and publicly voiced intent to target Westerners and the U.S. specifically. To me, that is very, very worrying."