An interesting article mentioned that gunmen fatally shot an American teacher in the Yemeni province of Taiz on Sunday, two defense ministry officials said. The U.S. Embassy in the capital Sanaa said it had heard reports of an American death and was investigating. It did not confirm an American had been killed. Would you like to know more? 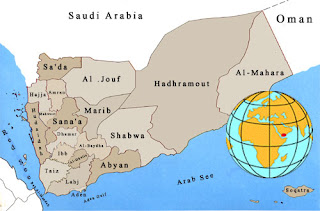 In Sunday's attack, two gunmen dressed in military uniforms on a motorcycle fired eight shots at the teacher who was on his way to work at a Swedish language center in the provincial capital, the defense ministry officials said. The city's head of security, Ali Saidi, said the American, identified as Joel Wesley, was killed in his car when the assailants sped up next to him and opened fire.

The gunmen opened fire on the man while he was in his car in Sena neighborhood of the city 270 kilometers southwest of Sanaa (see map on right), a security official said on condition of anonymity.

The slain man, was an American project leader who had worked at the International Training and Development Centre NGO in Taez for two years, sources at the centre said. The shooting "carries the fingerprints of al-Qaeda, but investigations are ongoing" to identify the culprits, said an investigating officer who also asked not to be named.

The United States says the Yemen-based al-Qaeda in the Arabian Peninsula, or AQAP, is the most active branch of the global terrorist network.

Sunday's attack came two days after an official said suspected Al-Qaeda gunmen abducted a Swiss woman, also a teacher at a language school, in the Red Sea port of Hodeida and moved her to the restive province of Shabwa farther to the east.

The question of "what next" remains tied to old understandings of what plagues Yemen. Yemen is a weak state, we are repeatedly told, which faced two strong challenges even before the outbreak of the Arab uprisings: 1) The secession impulses of southerners fed up with the repressive northern-dominated regime; 2) The armed conflicts from the northern Houthi rebels against the regime, ongoing since at least 2004.

Yemen's fractured condition poses particular problems in imagining how it can exist harmoniously when viewed through the worldwide idealization of the strong consolidated state. Some scholars and pundits have suggested that the nation-state system is in decline. It is true that international organizations and multinational corporations may be gaining strength, but strong centralized states still dominate.

And while the regime is regrouping, large parts of Yemen are already under localized rule, having had to manage themselves for years. Yemenis are not half as terrified as Washington of a decentralized Yemen; they have been familiar with the waxing and waning of central state authority for decades. For Yemen to move forward, the dialogue needs to include more than the old regime discussing a transition with input from old monarchs from the Gulf. A new era for Yemen needs to be truly inclusive, unified but not highly centralized.