An interesting article mentioned that Yemen's new president vowed Monday to pursue militants linked to al-Qaida to their last hiding place after they killed more than 100 soldiers in their deadliest attack on the Yemeni army. The militants said they had also captured dozens of soldiers in a raid after suicide bomb attacks on two military posts outside the southern city of Zinjibar Sunday, the most lethal attack since President Abd-Rabbu Mansour Hadi took office last month. Would you like to know more? 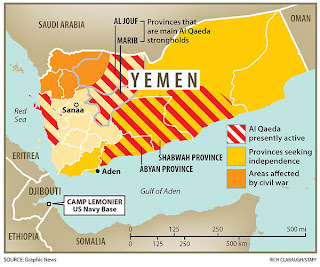 Monday, militants from the al-Qaida-linked Ansar al-Sharia (the extremists are known in Yemen as the Partisans of Sharia (Islamic law)) paraded military hardware seized in the attacks. Residents said the militants extolled their "victory" by megaphone in the streets of their stronghold of Jaar, 10 miles north of Abyan's provincial capital of Zinjibar (see map on right). The violence highlights the challenges Hadi faces as he tries to stabilize Yemen after a year of political upheaval that eventually unseated his predecessor, Ali Abdullah Saleh.

The campaign against al-Qaida is a key demand of Yemen's new leader by the United States, which had backed his election. Militants exploited anti-government protests that paralyzed Yemen for most of 2011 to seize the town of Jaar in March last year. Two months later, they captured Zinjibar. Zinjibar has been the site of regular clashes between the army and Islamist fighters, despite government claims to have "liberated" the city from militants last September. Last week Ansar al-Sharia said it would unleash a torrent of attacks unless the army pulled its forces from Zinjibar.

A U.S. ally in the fight against al-Qaida, Yemen has allowed Washington to launch drone strikes on militants who regrouped there after suffering reverses in Iraq and Saudi Arabia. Military officials said Sunday's battle in Abyan province left 78 soldiers and 28 militants killed and wounded scores from both sides. Medical officials confirmed the latest death toll. The army said it had sent reinforcements to the area from the southern city of Aden Sunday and beat the militants back.

Many soldiers’ bodies were found mutilated, and some were headless. The surprise attack and the mutilations have left government troops “fearful’’ and with “low morale,’’ according to a senior military official who was part of the defeated force. Another 55 soldiers were captured and paraded through a nearby town by the militants, who lost 32 of their fighters in the assault. “It was a massacre and it came by surprise as the soldiers were asleep,’’ he said. Militants sneaked behind army lines and attacked from the rear where there was “zero surveillance.’’

The U.S. had hoped that replacing Saleh would take some pressure off of Yemen’s government and military, who also confront tribal and separatist insurgencies, and allow them to fight back more effectively against the militants. Despite the defeat, and a surge of other attacks by al-Qaida, Hadi has continued to pledge to fight the militants. “The confrontation will continue until we are rid of the last terrorist, whether in Abyan or elsewhere,’’ the Yemeni media quoted him as saying on Monday.
But he may not yet have the means at his disposal to do so: the military official in Zinjibar said the forces routed by al-Qaida on Tuesday were poorly equipped, and that better-trained, better-armed specialized anti-terrorist units needed to be brought to the front.

Military officials had earlier said that terrorists overran the base and captured armored vehicles and artillery pieces, which they turned on the army. “It was a massacre and it came by surprise as the soldiers were asleep,” he said. Terrorists sneaked behind army lines and attacked from the rear where there was ‘zero surveillance’. The attack appeared to be a response to a pledge by President Hadi to fight the Yemeni branch of al Qaeda, believed to be the most active of the terrorist movement’s subsidiary networks.