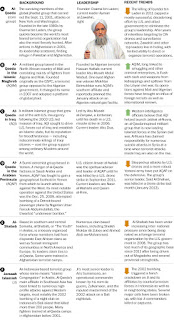 An interesting article mentioned that French and Malian troops have almost fully liberated northern Mali from al Qaeda in the Islamic Maghreb, known as AQIM, and the other jihadists who turned much of the country into a neo-Taliban state. Let's take this opportunity to reflect on how to wage war against al Qaeda in the post-Osama bin Laden era. Would you like to know more?

See map on right for AQ's presence in the world.

First, for more than a decade, the United States has led the world's efforts to crush al Qaeda. With our leadership we should let our allies shoulder the security burden as well. America should support them and provide them with assistance: reconnaissance drones, advanced munitions, refueling capacity, intelligence support—you name it. Second, Terrorist and extremist groups often thrive in places where government control is weak or nonexistent, therefore we should build local capacity and assist the locals and let them handle it, if they can. Third, AQIM receives a majority of its funding from kidnapping wealthy westerners whose countries cough up hefty ransoms. This is not chump change—AQIM has generated some $90 million over the last decade through such methods. While the United States, Great Britain, and other countries have long adopted a "no ransoms" policy, other countries—including France—are more willing to provide funds, causing the kidnappers to abduct more westerners. But as the State Department's counterterrorism coordinator Daniel Benjamin noted, if governments stopped paying ransoms, and engaged in more aggressive law enforcement and intelligence work, this would make hostage-taking "a much less attractive line of work." We should pressure other countries to stop paying off terrorists.

Unfortunately, though crippled and written-off as dead, al-Qaeda is still far being eliminated as a threat to the United States, as it reshapes its tactics to work with regional terrorist organizations. Instead of manning its own terrorist plots aimed at U.S. soil, al-Qaeda has used “affiliates” to stage “an unlikely but limited recovery over the past year,” according to The Washington Post. The terrorist organization has made connections with armed groups in North Africa and the Middle East, where weapons are aplenty and the U.S. is limited in its military options.

Disturbingly, outgoing Secretary of State Hillary Clinton recently told Congress that the rebels have received “messages” from a part of Pakistan where al-Qaeda’s core leaders are reportedly hiding out. She also warned that the Syrian “opposition is increasingly being represented by al-Qaeda extremist elements.”

After years of hardship and decline for al-Qaeda, which was rebuked by Iraqis and isolated by a U.S. campaign in Afghanistan and Pakistan, the group appears to be making some potentially significant inroads. It is exploiting the chaos and militancy in Syria and in the Western Sahel, a region of West Africa that includes Mali and Algeria that is difficult to govern.

The emerging offshoots have altered the composition of the terrorist network, scrambling its structure and complicating U.S. assessments of the threat that al-Qaeda represents. Recent attacks on U.S. facilities in Libya and a natural gas complex in Algeria, combined with the growing strength of an affiliate in Syria, have drawn attention to the lethal potential of an increasingly atomized al-Qaeda network, officials said. And though the targets of the groups have largely been regional, their multinational memberships and adherence to al-Qaeda’s ideology have heightened concern that the violence could eventually spread. “One of the most concerning things we’re seeing is a cross-fertilization and cross-pollinization of affiliates,” a senior U.S. intelligence official said. The newer groups have more diverse memberships, abundant access to weapons and a willingness to collaborate that “serves as a multiplier effect,” the official said.

U.S. officials said al-Qaeda’s franchise in Yemen on the southern tip of the Arabian Peninsula remains capable of — and committed to — carrying out attacks in the United States. Beyond Yemen, U.S. efforts are aimed largely at countering potential threats from groups that have not attempted transnational attacks, as well as a post-Sept. 11 determination to deny any node of al-Qaeda a haven like the one its founders exploited in Afghanistan. In particular, al-Qaeda franchises have gained strength in regions touched by the Arab Spring. The popular uprisings that toppled autocratic governments across the Middle East also weakened the grip of security services that had kept extremist forces in check. Civil wars in Syria and Libya provided local militants with weapons, experience and popular legitimacy.

Western governments already are warning of increased threats to embassies, businesses and tourists in the region. In France, where 10 percent of the population is of North African descent, security officials are bracing for the possibility of retaliatory strikes in response to its military action in Mali against militants linked to al-Qaeda in the Islamic Maghreb (AQIM), the affiliate in North Africa’s Sahara and Sahel regions.

“We’re seeing evidence of internationalization of these local groups, particularly AQIM,” Shurken said. “They are evolving rapidly and perhaps finally becoming the thing that people were fearing: a group with an international agenda.”

The flow of militants and weapons has strengthened and transformed AQIM, which officials had long regarded as little more than a regional kidnapping and criminal enterprise.

In its broader incarnation, the group is one of the most diverse affiliates, drawing militants from Mali, Mauritania, Libya, Egypt and Sudan. The organization’s amorphous membership also illustrates what U.S. officials described as an increasingly fluid militant network.

Among U.S. counterterrorism officials, a surging al-Qaeda affiliate in Syria is a source of particular concern. The group, Jabhat al-Nusra, is backed by al-Qaeda’s branch in Iraq and has become one of the most potent groups in a broader insurgency against Syrian President Bashar al-Assad.

AQIM is at the center of a hub of militant groups in North Africa with varying levels of allegiance to the al-Qaeda ideology. Among them are Ansar al-Din, which seized control of cities in northern Mali last year before a recent intervention by the French military, and Boko Haram, a Ni­ger­ian organization that officials said has contemplated attacks on U.S. interests but has focused so far on targets with weaker defenses.

U.S. officials said that al-Qaeda’s core leadership group in Pakistan, led by Ayman al-Zawahiri, continues to communicate with affiliates and other followers. But those messages are sporadic and rarely translate into any direct support. But the communication does exist through a base in Pakistan. The elimination of those bases in Pakistan must be at the forefront of any U.S led efforts to curb these branches of AQ that have appeared.

Unknown said…
Great posting. I'm very happy when i stop an read your article. Keep blogging my friend and dont forget to comment back into my blog. Thanks.
February 6, 2013 at 2:13 PM