An interesting article mentioned that Spanish police on Friday detained eight people in the enclave of Ceuta on suspicion of sending jihadist fighters to Syria, the Interior Ministry said. The network based in Ceuta and Morocco allegedly recruited potential fighters, indoctrinated them and organized their trip via Turkey to Syria, according to the Ministry and the daily El Pais. The Ministry said the network was believed to have sent dozens of fighters to Syria, where some of them may have undergone military training or even participated in suicide attacks.  The network may have sent fighters to other countries as well, El Pais reported. Most of the detainees were Spanish nationals. Police searched several locations. The Spanish enclave of Ceuta, which is claimed by Morocco, has a population of around 80,000. Nearly half of them are Muslims. Syria’s 27-month-old conflict is believed to have drawn hundreds of foreign fighters. 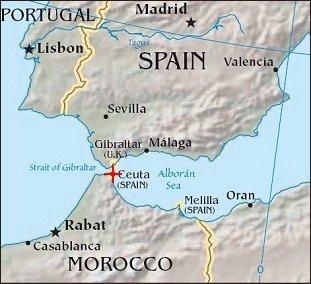 Several suspected Islamic extremists have been arrested in recent years in Spain.

Police in Valencia in February arrested a 22-year-old Moroccan, Mohamed Echaabi, for allegedly plotting terrorist attacks in Spain and elsewhere in Europe.

In August, Spanish authorities said they arrested two Chechens and a Turk, suspected Al-Qaeda members thought to have been planning an attack in Spain or elsewhere in Europe.

The arrests in Spain indicate that al Qaeda continues to pose a serious threat and that Obama's triumphalism may be premature. Jorge Fernández Díaz, the Spanish interior minister, put it this way: "The terrorist organization al Qaeda represents a major threat globally and in particular to the entire Western world." Three suspected al Qaeda terrorists arrested in Spain in early August 2012 were allegedly plotting an airborne attack on a shopping mall near Gibraltar, the British overseas territory on the southernmost tip of Spain.

Al Qaeda's largest terror attack in Europe took place in Madrid on March 11, 2004, when bombs were exploded on four commuter trains; 191 people were killed, more than 1,800 were wounded. Since then, in towns and cities across Spain, police have been continuing to arrest dozens of al Qaeda members and other Jihadists.

Those detained in the raids on Friday morning are accused of being part of a network linked to al-Qaeda. They are suspected of funding, indoctrinating and facilitating travel for would-be fighters. Interior Ministry Jorge Fernandez Diaz called the operation a "hard blow" against international terrorism.(See pictures below) 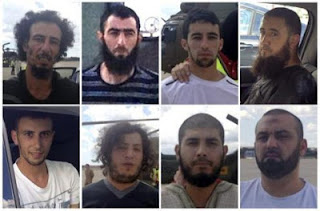 All the detainees are Spanish citizens, Spanish media reported. In a statement, the ministry of interior said dozens of people, some of them under 18, had left both Ceuta and Moroccan territory under the cover of the al-Qaeda-linked network. Some of them had taken part in suicide attacks, while others had joined training camps to prepare for armed action, the ministry said. Several groups of jihadists were still expecting to travel from Spain to Syria, the ministry statement said, adding that the investigation was still ongoing.

"We are aware that they facilitated the travel of a number of persons from Ceuta, Morocco and other places in Spain, via Turkey," Fernandez Diaz said.
The National Police and the Civil Guard (Guardia Civil) began separate investigation in 2009 and 2011 but began working together earlier this year.

The ministry of interior said the case had been registered with a court for investigation. The presence of foreign combatants amongst those fighting the government of Bashar al-Assad is causing anxiety in Western countries, as well as in Syria itself.

In April, EU counter-terrorism co-coordinator Gilles de Kerchove told the BBC that an estimated 500 Europeans were fighting with rebel forces in Syria. Last year, three people from Ceuta who went to fight in Syria were killed in separate battles, the Spanish news agency Efe reported.

And in May, a family from Ceuta reported the disappearance of a young man who they suspected might have been picked up by a militant network to fight in Syria, Efe said. Among the other foreigners killed in Syria were two Britons and an American woman.

Interesting that in May the leader of Al Qaeda in Spain, Imad Eddin Barakat Yarkas (see picture below), alias Abu Dahdah, was released. The release was scheduled for November of this year, but the third section of the Criminal Division of the High Court has upheld the appeal he filed with his lawyer, James Teijelo. Abu Dahdah has abandoned prison Estremera (Madrid) and was received by his relatives at the gates of the prison. 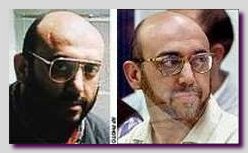 Arrested in 2001, he was sentenced to 27 years imprisonment by the High Court for an offense of conspiracy to commit terrorist murder, which the Supreme Court later reduced to 12 years to eliminate the penalty for conspiracy and keep the offense of belonging to a terrorist organization. He was arrested in Madrid on November 13, 2001, just two months after 9-11, allegedly responsible for a cell of Al Qaeda in Spain, and imprisoned five days later by order of Judge Baltasar Garzón. The U.S. includes him on its blacklist of Al Qaeda terrorists, since it holds that Abu Dahdah knew of the plans for the September 11 attacks and was fundamentally involved.

U.S. officials have held numerous meetings with senior officials from the ministries of Foreign Affairs and the Interior to include this man in the black lists of terrorist financing of the Security Council of the UN, as reflected in the secret correspondence of the embassy. The negotiations have been arduous, stressful and difficult, but we have not relented in our efforts.

Barakat was the founder in the eighties of the first Islamist cells in Spain and took over from Mustapha Setmarian, another married a Spanish Syrian Madrid. He fled during the U.S. arrival in Afghanistan, was arrested in Pakistan in 2005 and handed over to the U.S.

Yarkas was also well connected to Indonesian terrorist cells, mainly through Parlindungan Siregar who was supplying, selling or transferring arms and related materiel to” or “otherwise supporting acts or activities of” Al-Qaida.

In May 2001, Siregar accompanied the head of the Spanish Al-Qaida cell in Madrid, Yarkas, to Poso, Indonesia. Soon afterwards, Yarkas arranged funding for an international training camp there.  The Poso camp was established by Parlindungan Siregar and consisted of eight to ten small villages with small arms ranges and combat maneuver training areas.

Siregar worked as an intermediary for Agus Dwikarna (QI.D.111.03) and arranged for several hundred Al-Qaida operatives from Europe to travel to Indonesia for training. According to a Spanish court document, Siregar recruited fighters in Spain to be sent to terrorist-military training camps in Afghanistan, Bosnia and Herzegovina and Indonesia and was the leader of one of the existing camps in Indonesia at the service of Osama bin Laden (deceased).

Siregar has worked to achieve Al-Qaida’s terrorist goals in Southeast Asia: he is among the Jemaah Islamiyah (QE.J.92.02) members that have plotted to assassinate international leaders and planned and supported attacks such as the Bali bombing in 2002.

Al Qaeda has also been linked to Spain's worst terrorist attack, the Madrid train bombings of March 2004, which killed 191 people and wounded many more. The cell phones used to detonate the bombs were provided by Jamal Zougam, yet another member of Yarkas' al Qaeda cell, and Zougam's accomplices included members of a known al Qaeda affiliate, the Moroccan Islamic Combatant Group.

Eliminating Yarkas would be of utmost importance prior to another large scale attack orchestrated by this Jihadist.