The Current Threat of ISIS and the Future!

British authorities broke up a plot by ISIS to unleash a terror strike in London when they nabbed two men — and cops searched several other addresses as part of the probe, officials said. The two London residents — 19 and 20 years old — were held by Scotland Yard after the early-morning raid, the Evening Standard of the UK reported. The 20-year-old allegedly funded terrorism and failed to disclose information about a terrorist act. The younger suspect allegedly planned terrorist acts. The latest arrests came just days after hate preacher Anjem Choudary, 49, one of Britain’s most notorious Islamic activists, was sentenced to five-and-a-half years in prison after being convicted of encouraging support for ISIS.


Since my blog has begun he last few years have been dedicated to ISIS and given the current news coming from Syria, it has been a consistent theme that ISIS will control the media cycles around the world. Due to this, I would like to update you on what the current state of the ISIS issue is. t has become more complicated with multiple forieng actors involved in either prolonging it, or taking sides.

Therefore, let me give you a list of how confusing the ISIS problem has become: 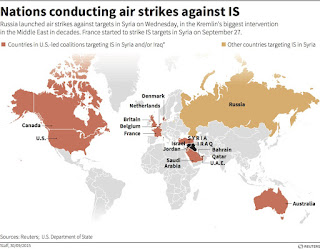 1) Turkey is attacking ISIS
2) Turkey is also fighting the Kurdish YPG fighters at the same time,
3) YPG fighters are also battling ISIS
4) We are currently helping the Syrian Kurds
5) Russian is also heping the Kurds
6) Kurds are now attacking Assad
7) Russia is supporting Assad and also bombing ISIS, though Russia seems to be bombing Sunni Rebels (secular fighters) who have U.S and British support.
8) Hezbollah (Lebanese Shia militant group) is supporting Assad
9) Currently U.S backed sunni groups are fighting alongside Al-Nusra Front (who as I have detailed before is an affiliated with Al-Qaeda) against ISIS
10) Russia and Iran are on Assad's side, while U.S and Britain are against Assad. Assad is also the sworn enemy of ISIS, BUT Assad's government still buys oil from ISIS

This regional problem has engulfed and set off a modern day cold war, and we are moving closer to full scale 9-11 style attacks from ISIS fighters slowly migrating BACK to western countries.

This issue, like in London is not going away, the sophisticated ISIS network that plots foreign strikes had planned for the carnage in the November 2015 Paris attacks to be far worse, to occur in other European countries as well and, investigators believe, had planned to follow them up with strikes in several locations. CNN has obtained thousands of pages of documents and photos from internal European investigations and gathered information from sources close to the Paris investigation that together provide new details about the highly organized terror group intent on attacking overseas targets. These documents reveal new information about two captured operatives who investigators believe intended to attack France. They also point, chillingly, to the existence of another suspected terrorist -- never before named publicly -- who authorities claim is linked to the Paris terror cell and was on the loose in Europe for months after that attack. That man, identified by authorities as Abid Tabaouni, was only arrested in July. 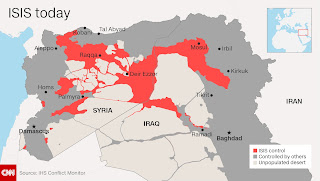 Turkey has finally decided to enter into the fight: Turkey’s president, Recep Tayyip Erdogan, suggested that his country was ready to carry out a joint operation with the United States in northern Syria to fight the Islamic State in its de facto capital, Raqqa. An operation in Raqqa would entail an expansion of cooperation on Syria between Turkey and the United States.

ISIS is recruiting desperate jihadists in a way al Qaeda 'never even considered'.With so much focus on individual Islamic State terrorists originating from North America and Europe, it’s easy to lose focus on where the majority of these jihadists hail from. But in addition to their country of origin, it’s also crucial to understand what their motivations had been to join the failing state. The evidence does suggest that In Tunisia, 90% of ISIS recruits are from economically marginalized towns and neighborhoods,” Badra Gaaloul, the president of the Tunis-based International Centre for Strategic, Security and Military Studies, explained.

More than half of the population in Tunisia, a predominantly Muslim country, was reported to be under the age of 30 — of those, 40% of them were unemployed. Additionally, in Jordan, 70% of the population is under the age of 30 — about 1/3 of them were reportedly unemployed. Although correlation may not necessarily imply causation, the alleged effects of the high unemployment rate and ISIS recruiting figures are difficult to ignore: the report claims that so far, between 6,000 and 7,000 Tunisians and 3,000 Jordanians have joined ISIS’ ranks, making them the highest number of recruits originating from a single nation and per capita, respectively. 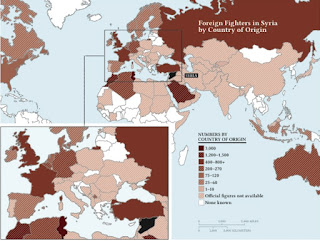 This problem lies also in their ability to recruit foreign fighters over the internet. In order to combat that, a pilot project has been launched by Google’s startup incubator and a British IT company that will target potential Islamic State recruits – and also the American far right – with new software that pairs violence-related search entries with anti-extremism ads. Islamic State (IS, formerly ISIS/ISIL) has made extensive use of online and social media platforms to spread its vision of radical Islam or lure recruits to wage jihad in Syria and Iraq. Now the world’s largest search engine has announced an unconventional project that aims to help counter extremists’ propaganda messages and de-radicalize those in danger of falling under their influence. Jigsaw, a technology incubator run by Google, has teamed up with London-based startup Moonshot CVE to design technology capable of redirecting a potential Islamist browsing for IS-related words and phrases to creative anti-extremist messages or videos.

We are making progress though, having an estimated $1 billion in revenue in 2015, ISIS has been able to fund their operations through their illicit oil trade network, along with the taxation of the inhabitants in ISIS-held territories. BUT, with US-led coalition airstrikes being conducted more frequently, not only is ISIS’ oil supply drying up, but the number of citizens to tax from their controlled cities is inhibited.

US-led coalition airstrikes have continued to target ISIS positions and infrastructure in northern Iraq in recent weeks, as Iraqi ground forces move closer to the terrorist group's stronghold in Mosul, the largest city it still controls. The US-led air campaign has continued apace in September. In four days this month, there were more than 30 strikes on ISIS targets in Iraq, which included fighting units, weapons, and other infrastructure. 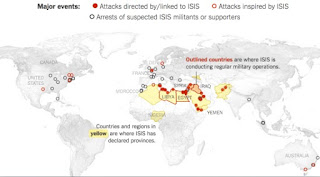 Even if they don’t, these other conflicts, left unresolved, will herald long-term instability in the region.  Military gains are not being matched by political solutions to the wider chaos and dysfunction that enabled the rise of the Islamic State in the first place. If the current war begets new wars, the Islamic State may yet endure. That’s partly because the U.S. strategy for defeating the Islamic State relies on a variety of regional allies and local armed groups who are often bitterly at odds. Though all of them regard the Islamic State as an enemy, most of them regard one another as enemies, too. As they conquer territory from the militants, they are staking out claims to the captured lands in ways that risk bringing them into conflict with others who are also seizing territory. New wars are brewing, for control of the post-Islamic State order.So far, the answer seems likely to be: more war.The borders of the Islamic State's "caliphate" are shrinking fast. The group’s strongholds in Iraq and Syria are collapsing one by one. The U.S.-led war has reached a point where questions are being raised about what comes next.

Below is a countdown of the potential wars we might see once ISIS is gone: 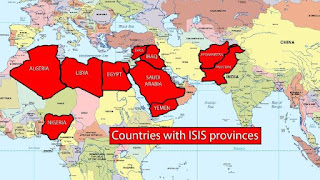 Islamic State makes terrorism threat facing U.S. gravest since 9/11 attacks. The terrorist threat facing the U.S. and its European allies is “bigger, wider and deeper” than at any point since the Sept. 11 attacks 15 years ago. We must be vigilant and bold enough to stop this group now!