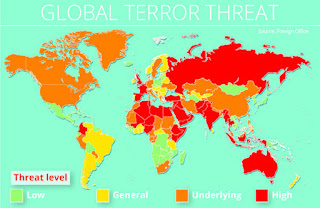 An interesting article mentioned that al-Qaida is trying to mount a revival at a time when Isis is in retreat in Iraq, Syria and Libya. What will 2017 look like and what threats will exist for us?


"Al-Qaida’s strategic experience is that if it makes a big deal of seizing territory, it attracts CT [counter-terrorism] resources, so it is simply not being as loud about it,” said Daveed Gartenstein-Ross, an expert at the Foundation for Defense of Democracy, a US thinktank. In 2017, we will need to look closely and monitor South Asia, Yemen, Africa and The Levant. Of those areas we need to also look closely at Jabhat Fateh Al-Sham, a more recent terrorist group looking to make a name for itself. 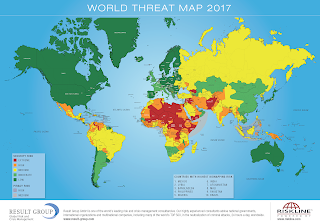 So who are Jabhat Fateh al-Sham (JFS)?

The Nusra Front—also known as Jabhat Fateh al-Sham (“the Levantine Conquest Front”)—is the second-strongest insurgent group in Syria after ISIS, and a former al-Qaeda affiliate that seeks to replace the Assad regime with an Islamist state. The Nusra Front stands accused of serving as a base for global al-Qaeda operations, including plotting attacks against targets in the United States and Europe. Before its formal dissociation from al-Qaeda, the Nusra Front had a long and proven history of serving as al-Qaeda’s loyal affiliate in Syria. In July 2016, however, al-Qaeda leader Ayman al-Zawahiri released an audio statement giving the Nusra Front formal permission to break ties with al-Qaeda if the link was “conflicting with [the Nusra Front’s] unity and working as one body.” Analysts had long surmised that a formal break from al-Qaeda, however artificial, could allow the Nusra Front the opportunity to attract more funding from Gulf States, consolidate local support, and present itself as a legitimate insurgent group in Syria. Despite the group’s origins in Iraq, the Nusra Front has branded itself as a native rebel group with foreign experience.

In Syria, the group continues to profess its goal of toppling the Assad regime and establishing an Islamic state in its place, albeit incrementally. In its effort to consolidate local support, the Nusra Front has adopted military and outreach strategies from al-Qaeda-linked jihadist Abu Musab al-Suri, participating in numerous Syrian-based coalitions and collaborating with other rebel groups to carry out attacks against Assad forces. As of mid-2016, the Nusra Front’s paramilitary force is reportedly comprised of around 5,000 to 10,000 fighters, including an estimated 7,000 fighters in Idlib province alone.

The Nusra Front has also attracted the largest contingency of foreign fighters after ISIS.  As of August 2016, the group reportedly receives streams of funding through a variety of means, including taxation, tariffs, fines, ransoms, international donations, oil sales, looting, and smuggling.

The leader Abu Muhammad al-Golani seems to break ties to form his own leadership based organization. When the front was asked to swear allegiance to DAESH leader Muhammad Baghdadi, it announced loyalty to Al Qaeda following which the US listed the group as a terrorist organisation. Iraqi, Jordanian and Lebanese security officials describe the 39-year-old al-Golani as one of the top leaders of al-Qaeda.

There are differences between ISIS and the Nusra Front, both meaningful and cosmetic. ISIS has boasted of its brutality, using its violence to lure large numbers of the disturbed and disenfranchised to its cause. The Nusra Front on the other hand, though open about its affiliation with al-Qaeda, has sought to pitch itself as a moderate and unifying force, at times working alongside local rebel groups fighting the Assad regime and ISIS.

Much of what is known about Nursa Front leader Abu Muhammad al-Golani is based on information released by senior Iraqi military intelligence officials on the condition of anonymity. According to the officials, al-Golani was a teacher of classical Arabic.” Al-Golani is so mysterious that no one can say with certainty what his real name is. Al-Golani is a nom de guerre, indicating he was born in the Israeli-occupied Golan Heights. A native of Syria, he joined the insurgency after moving to Iraq, regional intelligence officials say. According to two senior Iraqi military intelligence officials, he was once a teacher of Arabic before moving to Iraq, where he turned to militancy and eventually became a close associate of Abu Musab al-Zarqawi, the Jordanian-born leader of the militant group al-Qaeda in Iraq. There, he advanced through al-Qaeda’s ranks and eventually returned to Syria shortly after the uprising against Assad began in March 2011. After al-Zarqawi was killed by a US airstrike in 2006, al-Golani left Iraq, briefly staying in Lebanon, where he offered logistical support for the Jund al-Sham militant group, which follows al-Qaeda’s extremist ideology, the officials said.

He returned to Iraq to continue fighting but was arrested by the US military and held at Camp Bucca, a sprawling prison on Iraq’s southern border with Kuwait. At that camp, where the US military held tens of thousands of suspected militants, he taught classical Arabic to other prisoners, according to the officials, who spoke on condition of anonymity because they were revealing information from secret files.

After his release from prison in 2008, al-Golani resumed his militant work, this time alongside Abu Bakr al-Baghdadi, the head of al-Qaeda in Iraq — also known as the Islamic State of Iraq. He was soon appointed head of al-Qaeda operations in Mosul province. Shortly after the Syrian uprising began, al-Golani moved into Syrian territory and, fully supported by al-Baghdadi, formed the Nusra Front, which was first announced in January 2012. A Jordanian security official said only the top echelon in al-Qaeda know al-Golani’s real name, but he’s commonly known to them as “Al Sheikh Al Fateh,” the Conqueror Sheik.

A new report “The Jihadi Threat: ISIS, al-Qaeda and Beyond,” compiled by the United States Institute of Peace and the Wilson Center in Washington DC, identifies six future scenarios for IS: a diminished status quo, resulting in a retreat to the desert and a return of the insurgent tactics it used in Iraq between 2007 and 2011, while also continuing to eye opportunities to pull off spectacular attacks in Europe and the US.

The authors also foresee al-Qaeda, having played the “pragmatic long game,” well positioned to restore the prestige it has lost among other militant groups thanks to the rise of IS. In this sense, al-Qaeda is well positioned to snare fighters who have become disillusioned with the degrading of IS capabilities, and the group’s loss of territory.

Countries such as Malaysia and Indonesia will see and upswing in terrorist action and to counter terrorism, they must then have in place strong surveillance and a good legislation – and, more importantly, policies to actually tackle and counter these issue that have gained prominence in the region.