ISIS-K and the Threat to Afghan Peace!

The self-proclaimed 'caretaker' President of the Afghanistan Amrullah Saleh on Friday said that the Islamic State-Khorasan Province (IS-K) has links with the Taliban and the Haqqani network, particularly the ones operating in Kabul.Saleh also hit out at the Taliban for denying links with the Islamic State terror group (ISIS) and said that it is similar to the denial of Pakistan on Quetta Shura. The Islamic State terror group has claimed responsibility for Thursday's attack outside the Kabul airport in Afghanistan.

What Is the Islamic State Khorasan, a.k.a. ISIS-K?

The group, known as Islamic State Khorasan Province, ISIS-K or ISIS-KP or IS-K, is an Afghan affiliate of ISIS, which Mr. Biden’s two predecessors sought to destroy.

ISIS-K (IS-K), founded in 2015 by disaffected Pakistani Taliban, is smaller, newer and embraces a more extreme version of Islam than the Taliban, which just toppled the U.S.-backed government of Afghanistan after a 20-year bloody campaign.

The name Khorasan translates to “The Land of the Sun.” Khorasan refers to a historical region that includes parts of Iran, Afghanistan, and Pakistan.

After 2003, a branch of Al Qaeda broke away and established a so-called caliphate, an Islamic theocracy, in large parts of Iraq and Syria. At its peak, the territory was the size of Britain. That breakaway faction, called the Islamic State, or ISIS, was savvier about social media than Al Qaeda, which recorded long, crudely made videos, sometimes from its cave hide-outs. ISIS also appealed to a younger generation of fighters, in part by promising immediate glory and rewards for those willing to fight its enemies.

In 2014, Pakistani national Hafiz Saeed Khan was chosen to spearhead IS-K province as its first emir. Khan, a veteran Tehrik-e Taliban Pakistan (TTP) commander, brought along other prominent TTP members—including the group’s spokesman Sheikh Maqbool and many district chiefs—when he initially pledged allegiance to al-Baghdadi in October 2014. Many of these individuals were included in the first Khorasan Shura or leadership council.

IS-K’s early membership included a contingent of Pakistani militants who emerged in Afghanistan’s Nangarhar province around 2010, just across the border from the former Federally Administered Tribal Areas (FATA) of Pakistan. Many of these militants were estranged members of TTP and Lashkar-e Islam, who had fled Pakistan to escape pressure from security forces. The appointment of Khan as IS-K’s first emir, and former Taliban commander Abdul Rauf Khadim as his deputy, further facilitated the group’s growth, utilizing long established recruitment networks in Afghanistan and Pakistan. According to the Combatting Terrorism Center at West Point, as of 2017, some members of Lashkar-e-Taiba, Jamaat-ud-Dawa, the Haqqani Network, and the Islamic Movement of Uzbekistan (IMU) had also defected to IS-K.

IS-K has received support from the Islamic State’s core leadership in Iraq and Syria since its founding. As the Islamic State loses territory, it has increasingly turned to Afghanistan as a base for its global caliphate. Following IS-K’s official pledge of allegiance to the Islamic State’s global “ummah,” Islamic State wilayats (or provinces) in Iraq and Syria publicly announced their congratulations for the movement’s expansion into Central Asia through media statements and videos. To that end, the Islamic State has invested some financial resources in its Khorasan province—as much as several hundred thousand dollars—to improve its networks and organization in Central Asia. Additionally, a recent United Nations publication commented that “[ISIS] core continues to facilitate the relocation of some of its key operatives to Afghanistan,” including Abu Qutaiba, the Islamic State’s former leader in Iraq’s Salah al-Din province. IS-K are currently based in the eastern province of Nangarhar, close to drug and people-smuggling routes in and out of Pakistan. While most of its activities have been in Nangahar and Kabul, it has also claimed attacks in the provinces of Kunar, Jowzjan, Paktia, Kunduz and Herat.

Afghanistan remains a top destination for foreign terrorist fighters (FTFs) in the region, as well as for fighters leaving battlefields in the Levant. IS-K’s public affairs prowess, global prestige, and sustained resources facilitate the recruitment of these FTFs, drawing them away from other militant movements.

IS-K has been antagonistic mostly toward the Taliban, and the two groups have fought for turf, particularly in eastern Afghanistan. Since 2017, experts say, ISIS-K has been responsible for roughly 250 clashes with the U.S., Afghan and Pakistani security forces.

At its height the group numbered about 3,000 fighters. The group has also attracted a significant cadre from the Islamic Movement of Uzbekistan; fighters from Iran’s only Sunni Muslim-majority province; and members of the Turkestan Islamic Party comprising Uygurs from China’s northeast. Many were attracted to Isis’ violent and extreme ideology, including promises of a caliphate to unite the Islamic world, a goal never espoused by the Taliban. A recent UN Security Council report suggested there were between 1,000-2,200 Isis-K fighters, down from a peak of between 5,000-6,000 in 2016, but their ranks may have been swollen in recent weeks as the Taliban’s advance saw prisoners freed across Afghanistan. It also recruits both Afghan and Pakistani jihadists, especially defecting members of the Afghan Taliban who don't see their own organization as extreme enough.

IS-K has targeted Afghan security forces, Afghan politicians and ministries, the Taliban, religious minorities, including Shia Muslims and Sikhs, US and NATO forces, and international agencies, including aid organizations. IS-K have been blamed for some of the worst atrocities in recent years, targeting girls' schools, hospitals and even a maternity ward, where they reportedly shot dead pregnant women and nurses.

In a 2014 interview with Al Jazeera, Aymenn Jawad al-Tamimi, a fellow at the Middle East Forum, said the ISKP is “not actually a separate group”, but rather a contingent of al-Qaeda members coming from the Afghanistan-Pakistan border region.

The endgame of ISKP, or ISIL in general wherever it operates, doesn’t have to be an immediate strategic goal. They carry out these operations with the intention of causing as much carnage as possible for the purpose of showing that they are still around, that they are still a threat.

IS-K founding emir, Hafiz Saeed Khan, was killed by a United States airstrike in Nangarhar province, Afghanistan, on July 26, 2016.15 Following Khan’s death, IS-K has had three subsequent emirs, all of whom have also been eliminated by the United States in targeted strikes: Abdul Hasib was killed in April 2017; Abu Sayed was killed on July 11, 2017; and most recently, Abu Saad Orakzai was killed on August 25, 2018.16 These leaders, as well as those at the district and provincial levels, generally possessed meaningful experience with local militant movements in Afghanistan, Pakistan, and Uzbekistan prior to joining IS-K. 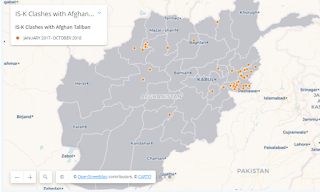 IS-K’s overarching strategy includes local and global objectives. In a 2015 video series, IS-K’s media office declared that “There is no doubt that Allah the Almighty blessed us with jihad in the land of Khorasan since a long time ago, and it is from the grace of Allah that we fought any disbeliever who entered the land of Khorasan. All of this is for the sake of establishing the Shariah.” It went on to declare, “Know that the Islamic Caliphate is not limited to a particular country. These young men will fight against every disbeliever, whether in the west, east, south, or north.”17 Like the Islamic State’s core leadership in Iraq and Syria, IS-K seeks to establish a Caliphate beginning in South and Central Asia, governed by sharia law, which will expand as Muslims from across the region and world join. IS-K disregards international borders and envisions its territory transcending nation-states like Afghanistan and Pakistan.

Furthermore, its global aspirations include “[raising] the banner of al-Uqab above Jerusalem and the White House,” which equates to the defeat of both Israel and the United States.18 IS-K’s ideology seeks to rid its territory of foreign “crusaders” who “proselytize Muslims” as well as “apostates,” which include anyone from Sunni Afghan National Army recruits to Hazara Shias.19 While there is no evidence that Islamic Khorasan has been involved in plotting against the U.S. homeland, it has mocked and threatened the United States in its official media streams and called for lone-wolf attacks in the West.

Though the group’s presence across Afghanistan is increasing, airstrikes have been nearly exclusive to Nangarhar and Kunar provinces (96 percent of all airstrikes since January 2017) in an effort to target operational bases and leadership.39 All in all, while IS-K’s goal of establishing an Islamic state in Central Asia remains improbable, its propensity for exploiting grievances, catalyzing instability, and taking advantage of ungoverned spaces will make peaceful reconciliation and nation-building in Afghanistan difficult for the foreseeable future.

April 18, 2012
Interesting Article: " Australia to mostly end Afghan mission next year " by LA Times / Kabul published Tuesday, April 17th, 2012 An interesting article mentioned that as the U.S. and its allies refine plans to reduce their troop levels in Afghanistan and turn combat operations over to Afghans, Australia has announced that it will pull most of its forces out next year. Would you like to know more about what is going in Afghanistan?
Post a Comment
Read more

October 03, 2011
Interesting Article: Dreaded militant hit squad goes rogue in Pakistan by MICHAEL GEORGY / Islamabad published Monday October 3, 2011 A recent article by Reuter’s journalist mentioned that an elite militant hit squad known as the Khorasan unit was hunting down and killing anyone suspected of helping the U.S, Pakistan and other military allies. Who are they?
Post a Comment
Read more