Latest about Al Qaeda in Mali!


An interesting article mentioned that Al Qaeda's affiliate in North Africa is the militant organization's richest faction and the dominant Islamist force among those controlling northern Mali. General Carter Ham said the international community and the Malian government now faced a complex challenge to try to deal with the strengthened presence in Mali's largely desert north of al Qaeda in the Islamic Maghreb (AQIM), the militant group's North African franchise. Would you like to know more? 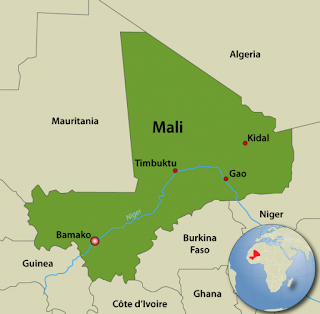 Mali, for a long time seen as a stable nation in an often turbulent West African region, imploded in the space of a few weeks after a March 22 coup sowed confusion and allowed a mix of Tuareg separatists and Islamist rebels to occupy the northern two-thirds of the country. Over recent weeks, the Islamists, including AQIM fighters, have gained control of the vast area, creating what African and Western leaders are calling a "terrorist haven" that they say threatens both regional and international security. African leaders and Western governments including the United States and France, the former colonial power in the region, have been discussing the idea of a Western-backed African military intervention force going in to try to expel the rebels from the north and reunite divided Mali (See map on right).

The armed Islamist groups who have occupied northern Mali, sharing out key towns, are all acting under the aegis of Al-Qaeda in the Islamic Maghreb (AQIM), according to regional security sources.
Ham said the groups now controlling Mali's north were boosted by the spillover of arms and fighters from Libya's conflict last year. But he criticized as "ineffective" previous efforts to tackle AQIM in northern Mali, where its members have held kidnapped foreigners for multi-million-dollar ransoms. The U.S. general said relationships between the various Islamist groups in northern Mali were complex and that it was not clear if they were aligned on an ideological or a purely opportunistic basis.

The U.N. Security Council on July 5 endorsed West African efforts to end unrest in Mali but has stopped short of backing military intervention, asking for a more detailed plan for such an operation. Experts from the African Union and the West African regional grouping ECOWAS have been working on this plan.

Northern Mali's main cities and administrative regions, Timbuktu, Kidal and Gao have been occupied by Ansar Dine (Defenders of Faith) and the Movement for Oneness and Jihad in West Africa (MUJAO) since late March. But in each city, security experts say, it is the North African Al-Qaeda franchise which is pulling the strings. The group benefits from its perfect knowledge of northern Mali and its vast desert terrain, where it has spun a tight network across tribal and business lines, supporting poor communities and protecting traffickers.

The combustible mix of AQIM, Ansar Dine and Tuareg rebels is very complex and dangerous. They are all very well armed thanks to looting Libyan arms depots after the fall of Qaddafi. AQIM has acquired weapons from Libyan caches that probably make it the best-armed Al Qaeda franchise in the world today.

AQIM stems from a group started in the late 1990s by radical Algerian Islamists, who in 2007 formally subscribed to Al-Qaeda's ideology. Mali reaffirmed its support for activities countering AQIM and has been an advocate for enhanced regional cooperation. Mali-U.S. counterterrorism cooperation was strong in 2011. U.S.-led Joint Combined Exercises and Trainings have built the capacity of Malian mobile units called Echelons Tactiques Inter-armes, and the 33rd Paratrooper Regiment to conduct effective patrols and interrupt the activities of AQIM. Mali has participated in the multinational military exercise, FLINTLOCK, since its inception. Malian National Police, Gendarmerie, and National Guard have benefitted from Anti-Terrorism Assistance programs.

Mali's law enforcement efforts have increased over the past year, including the arrest of Bechir Sinoun for the attempted bombing of the French Embassy in Bamako, the detention of two individuals affiliated with AQIM in Bamako, and the arrest of two individuals implicated in the Hombori kidnapping. The Malian judiciary tried and convicted Bechir Sinoun, sentencing him to death on November 29; however, the Malian government subsequently repatriated Sinoun to Tunisia at the request of the Tunisian government so he could be tried there. Mali continued to participate in the Department of State's Antiterrorism Assistance program.

Following Mali's accession to the Egmont Group in July, CENTIF personnel attended an Egmont-sponsored Counterterrorist Finance seminar in Bamako on August 16-19. CENTIF also participated in a workshop sponsored by the United Nations Office of Drugs and Crime in Dakar, Senegal on March 9-11 related to freezing assets belonging to individuals suspected of money laundering or terrorist finance.

The main impediments to improving law enforcement response to terrorist finance were a lack of coordination between CENTIF and the law enforcement community as well as insufficient judicial capacity to transform CENTIF investigations into effective prosecutions.

Mali lacked the capacity to trace informal networks and money/value transfer systems including hawala. Like most West African countries, Mali relies on cash for virtually all daily transactions. While businesses were technically required to report cash transactions over approximately U.S. $10,000, most do not.

AQIM is growing to such an extent that Turkey's Hurriyet Daily News reports that Turkey is sending missile batteries to the Syrian border, where rebels are reportedly in control of the Jarabulus, Bab al-Hawa and Al-Salama border posts. Rebel forces gained control of the Bab al-Hawa crossing on Thursday, but on Saturday, a group of some 150 foreign fighters were in control of the post, an AFP photographer said. Some fighters said they belonged to Al-Qaeda in the Islamic Maghreb (AQIM), while others claimed allegiance to a group called Shura Taliban.

Mali’s northern neighbor, Algeria, has been at war with AQIM since its creation and has violently repressed the group at home. The generals who run Algeria, a secretive group referred to as le pouvoir, have been at war with the country’s Islamists since the Islamists won an election in 1992 and the army prevented them from taking power by staging its own coup. Most of the rank and file of the AQIM are Algerian citizens. But Algiers has taken a curiously passive approach to the crisis in Mali. It withdrew its military advisors from Mali when the conflict began and cut off military assistance. It refers to the issue as a purely internal one. It has pressed for a political solution—not a military intervention. In turn, the jihadists have praised their restraint.

The Algerians were against the NATO operation in Libya, which they feared would unleash Al Qaeda in the area. They are especially anxious that a potential intervention in Mali not include French or other Western forces.

In the capital, Bamako, there is near paralysis in a state machine that lacks effective leadership from either the feeble civilian transitional government or the myopic clutch of military putschists who drove President Amadou Toumani Touré from power in March. Among expatriate Malians in Europe, the overwhelming sentiments are of horror, anger and despair at the catastrophe that has swallowed up their country. Yet back in Bamako the popular mood is more complicated, and potentially resentful of interference by Ecowas. The regional bloc is perceived as an ally of the political establishment and of the overthrown president.

When Western powers threw their weight behind the Libyan revolution last year, they failed - in the words of the presidents of Chad and Niger, Idriss Déby and Mahamadou Issoufou - to provide the 'after sales service' needed to contain the impact on West Africa. The Libyan regime's disintegration flooded Saharan countries with cheap weaponry, giving Al-Qaeda in the Islamic Maghreb (AQIM) and its north Malian ally Ansar Eddine an opportunity to reinforce their arsenals. Cash was no barrier for jihadists rich from the proceeds of kidnap ransoms and trans-Saharan smuggling.

As Mali becomes the new foothold of Al Qaeda, more action is needed to root them out from their bases, even as far as Mali.