The Meqdad Clan of Baalbek!

An interesting article mentioned that a series of tit-for-tat abductions this week of Shiite Lebanese and Sunni Syrians threatens to further undermine stability in Lebanon as the sectarian nature of the brutal conflict in Syria deepens and spreads. Members of the Meqdad clan, a powerful Shiite tribe from the Bekaa Valley in eastern Lebanon, announced today that the "military wing" of the family had abducted more than 20 Syrians in Lebanon whom they alleged were fighters with the rebel Free Syrian Army (FSA). The Meqdads said that the abductions were in response to the kidnapping, allegedly by the FSA, of Hassan Selim Meqdad in Damascus at the beginning of the week. The FSA accused Hassan Meqdad of being a member of Lebanon's militant Shiite group Hezbollah, a strong supporter of the Assad regime. Hezbollah and the Meqdad family have denied the claims, with the latter saying that he was an employee of a Lebanese bank. Would you like to know more? 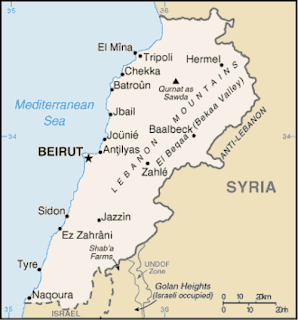 For many years Beirut has been a vantage point from which journalists and analysts watched and reported the news from the wider Middle East. Now, suddenly, it is in the news again for the first time in a long time. Television bulletins here are dominated by reports of a hostage-taking drama which is providing a sharp reminder of Lebanon's deep and inextricable links to the crisis in Syria.
It began when rebels in Syria detained a Lebanese Shia, Hassan al-Meqdad, and accused him of being a member of the Shia militant group Hezbollah who had entered the country to fight for the government of President Bashar al-Assad.

Meqdad, though, is a member of a heavily-armed Shia clan (Meqdad Clan) with smuggling interests in the east of Lebanon and they are angrily determined to get their man back. They have rounded up dozens of Sunni Muslims in Lebanon, including a number they accuse of membership of the Free Syrian Army.

The Meqdads - like many people in Lebanon - view the Syrian conflict through a straightforwardly sectarian lens.

They recognize that Syria is - or was - a secular republic, but in their view this is about Sunni Muslim rebels trying to unseat a man whose Alawite faith makes him part of the spectrum of Shia Islam.
The Meqdad clan does not have a formal armed faction, although some members of the family do serve with Hezbollah and, like all Bekaa Valley clans, they are fiercely independent, live by strict tribal codes of honor and solidarity, and scorn the authority of the Lebanese state. It would be a rare Meqdad who does not own at least one gun. Maher Meqdad, the spokesperson for the Meqdad clan, said that among the hostages was the spokesperson of the Syrian coordination committee in Homs, Abdallah Homsi, and another official identified as Mohammad Hammadeh.

On Tuesday, Al-Arabiya television reported that Hassan, whom it described as a member of Hezbollah, was detained by the FSA in Syria. Hezbollah denies Hassan is a member of the resistance group, as does the Meqdad clan.

The Meqdad clan says it is seeking to put pressure on the Free Syrian Army (FSA) to release Hassan al-Meqdad by targeting both Syrians it says are part of the rebel force and citizens of Turkey, one of the rebels' regional sponsors.

The kidnapping has evoked memories of Lebanon's own civil war, reinforcing fears that the Syria conflict could trigger more instability in a much smaller neighbor where Damascus has had a major influence over politics and security for decades.

Al-Meqdad clan announced on Thursday a halt to all of its military operations throughout Lebanon.
Head of al-Meqdad Association Maher al-Meqdad announced during a press conference: “As of this moment, we have halted all military operations because we have a sufficient number of Syrian captives affiliated with the Free Syrian Army, as well as the Turkish national.”

The family’s military wing warned that they can reach Aley, Tripoli and Iqlim al-Kharroub, saying that they have a bank of targets in Lebanon and capable of reaching regional targets. Though known for their armed clashes and running vendettas, a veil of intrigue surrounds the clans of Lebanon’s northeast region of Baalbek-Hermel.

The Meqdad family holds up in a first floor apartment of a building on the Meqdad Street of the Beirut southern suburb of Roueiss, family members, relatives, neighbors and journalists crowd the reception area and the large terrace.

The families of Baalbek-Hermel are organized into clans, known in Arabic as the “ashair,” and these include, to name a few, the families of Jaafar, Zeaiter, Hamiyeh, Hamadeh, Dandash, Shamas, Meqdad, Moussawi and Allaw. The dynamics of the Baalbek clans follow classic tribal feuds, shifting alliances and vendettas. Dealing with [the Baalbek] clans is a highly subtle endeavor,” says a senior security source, who was once in charge of maintaining law and order in the Baalbek-Hermel region. Several Baalbek clans including the Jaafars and Zeaiters have expressed support for the Meqdads in their endeavor to free their captured relative.

The source explains that the clans are ordinarily compliant unless they feel threatened, in which case they do not stand idle. “Those clans will not rest until they wreak vengeance on their foes.”
In the Hezbollah-dominated Roueiss suburb, neighbors speak of the “courage and loyalty” of the Meqdad clan. “If anyone is in need, they will help them and they are always present in difficult times or to pay condolences,” says Abu Ahmad, the owner of a snack shop in the area.

The organization and efficiency displayed by the military wing of the Meqdads is reminiscent of Hezbollah’s modus operandi and has left many wondering whether the party was playing a behind-the-scenes role. But the Meqdads have a long history of conflict with the powerful party. In June, the Meqdad family and Hezbollah clashed with arms in Roueiss, an area they share, and according to a resident of the neighborhood who wished to remain anonymous, these fights are regular occurrences.

A security source from the southern suburbs explains that the clashes usually take place after the clan has rejected Hezbollah’s mediation efforts to persuade them to surrender wanted family members to authorities. The Meqdads, who live – in addition to Baalbek – across Lebanon in Jbeil, Koura and south Lebanon, have not maintained good ties with the Lebanese state either.

Last year, the family breached a court order forbidding construction on disputed property in the majority Shiite Jbeil village of Lassa, considered the homeland of the Meqdads. While families in Baalbek (See maps above)-Hermel support Hezbollah, and resistance against Israel, they prioritize the interests of their individual clans, the source continues. “In Baalbek, a clan signifies protection and immunity.”

Lebanon and Syria emerged together from French colonial rule and have similar patchwork populations of different religious groupings, so it would be easy for tensions to bleed over the border from Syria into Lebanon. Rami Khouri, one of Beirut's most influential journalists and political analysts, says outsiders should look at this latest round of hostage-taking in the context of that long and fraught relationship, rather than simply in the context of the Syrian civil war.

The dramatic calls for citizens of Gulf states to leave Lebanon and the sudden escalation of the hostage crisis have drawn attention to Lebanese links to the crisis but it is worth bearing in mind that the Meqdad clan isn't making any demands beyond the release of its man in Syria.

There was speculation that Damascus could stage some sort of diversionary attack on the Golan Heights, historically Syrian territory which has been occupied by Israel since it captured the land during the Six Day War in 1967 Or it could increase the flow of arms to Hezbollah, the Shia militia in southern Lebanon which has the capacity to attack Israel from the north.

So far, though, those things have not happened - and the more the Syrian army gets bogged down in fighting the rebels, the less energy it will have for those sorts of diversionary adventures. The hostage crisis is serious - and the threat to the Meqdads' Turkish prisoner will cause deep anger in Turkey.

But there are reasons to hope that the problems can be contained and that, for now at least, the crisis in Syria will remain more or less confined within its own borders.