An interesting article mentioned that Fears of the growing influence of Al Qaeda-inspired groups inside Syria increased Monday with the release of video claiming the embattled city of Aleppo is now an “Islamic state” and that 13 radical factions jointly rejected the country’s new opposition coalition. The statement appears to be a reaction to the Syrian National Coalition for Opposition and Revolutionary Forces, the newly formed alliance of opposition groups trying to overthrow President Bashar Assad’s regime. Would you like to know more? 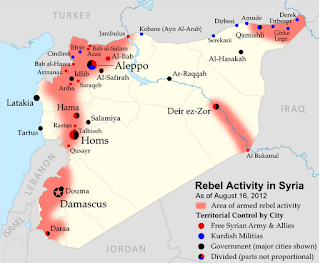 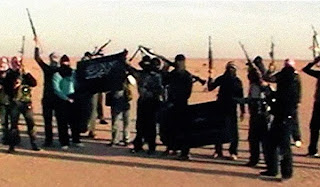 Calling it a “foreign project,” the Islamist organizations say they are suspicious of the opposition group, which emerged after the Nov. 11 talks in Doha, Qatar. The National Coalition, which was formed under the guidance of the Gulf Arab countries, Turkey and the U.S., replaces the former political group that had little credibility within Syria.

Jabhat al-Nusra, an organization that Western intelligence officials have linked to Al Qaeda and that has claimed responsibility for a string of bombings in Aleppo and the capital, Damascus, is purportedly one of the 13 groups rejecting the coalition. While there is still little evidence of operational links between these groups and Al Qaeda, Jabhat al-Nusra has the ability to post statements and videos to protected Al Qaeda websites, suggesting tacit support, Aaron Zelin, a fellow at the Washington Institute for Near East Policy, said.

So what is the Jabhat al-Nuṣrāh, aka Al-Nusra Front? Al-Nusra Front (meaning: "Front for the protection of the people of Greater Syria") is a jihadist paramilitary group of al-Qaeda formed late in 2011 during the Syrian Uprising. The group released their first public statement on 24 January 2012 in which they called for armed struggle against the Syrian government. The group claims responsibility for the 2012 Aleppo bombings, the January 2012 al-Midan bombing, the March 2012 Damascus bombings the murder of journalist Mohammed al-Saeed and possibly the 10 May 2012 Damascus bombings.

Iraqi Foreign Minister Hoshyar Zebari said that al-Qaeda in Iraq & Hamas members have gone to Syria, where the militants previously received support and weapons. The al-Qaeda in Iraq members seem to be joining the al-Nusra Front, according to Zebari. They are considered as the best trained and most experienced fighter of the Syrian rebels.

Institute for the Study of War speculated about the origins of Al-Nusra Front and linked it with Syrian government which sponsored jihadi groups during Iraq War which were fighting Coalition troops and had training camps in and around Abu Kamal. Group also grew in late March and April after many leading jihadists from Lebanese Fatah al-Islam and Palestinian groups joined the leadership and were able to secure sponsorship of key jihadi ideologues including Sheikh Abu al-Mundhir al-Shinqiti, Sheikh Abu Muhammad al-Tahawi, and Sheikh Abu al-Zahra al-Zubaydi.

The Nusra Front has taken part in numerous battle with the Free Syrian Army against the Syrian troops. In Aleppo particularly, they would come each time the FSA had troubles to hold their lines. Their discipline and their fighting skills earned them the admiration of the others rebels, who nicknamed them "the special forces of Aleppo".

The presence of foreign Islamic militants battling Syria's regime is raising concerns over the possible injection of al-Qaida's influence into the country's civil war. Syria's rebels share some of those misgivings. But they also see in the foreign extremists a welcome boost: experienced, disciplined fighters whose battlefield valor against the better-armed troops of President Bashar Assad is legendary. Jabhat al-Nusra is the largest grouping of foreign jihadis in Syria, and the rebels say they number about 300 fighters in Aleppo, as well as branches in neighboring Idlib province, the city of Homs and the capital Damascus. Any direct links to al-Qaida are unclear, although U.S. and Iraqi officials have said they believe members of al-Qaida's branch in Iraq have crossed the border to join the fight against Assad.

Many al-Nusra fighters wear long tunics and baggy pants in the style of mujahedeen or "holy warriors" in Afghanistan, and nearly all have beards, a hallmark of religious piety. A few smear kohl on their eyes and have long hair, emulating what they believe is a style favored by Islam's Prophet Muhammad in the seventh century. The fighters keep a low profile. They have turned a government building in Aleppo into their headquarters, but it is barely noticeable since it contains no banners or flags to give it away. Only occasional graffiti announces their presence in the city: "Jabhat al-Nusra is coming." Rebels who spoke with The Associated Press about the group had no clear idea about its leadership. (See picture above)

Many Syrian rebels are themselves pious Muslims who frame the fight against Assad's regime in a religious context. But some see the jihadis' brand of Islam as too starkly black-and-white and intolerant, dividing the world between the faithful and the infidels. Their presence, some fear, casts doubts on whether a post-Assad Syria will embrace democratic values or come under the sway of Islamists. An AP team witnessed some of the frictions at the field hospital in mid-October. Several al-Nusra fighters entered, and one of them — a tall, lanky non-Arab dressed in black with a black headband — was enraged by the presence of foreign journalists at the facility. Another fighter, who appeared to be of North African origin, tried to force a female photographer to leave the hospital after she attempted to photograph the X-ray of a wounded fighter's head.

The high esteem in which the Jabhat al-Nusra fighters are held has a great deal to do with the unruly behavior and lack of discipline of many rebels. One recent night, al-Nusra fighters brought the bodies of four Syrian rebels who were killed when a fellow rebel they were interrogating over suspicion that he was stealing grabbed an assault rifle and shot them. A fifth rebel was wounded. Later, when comrades of the four dead heard the news they gathered outside the hospital and, enraged, fired their entire bullet magazines into the air. Another group of fighters reacted similarly when struck by grief over the death of a comrade. Residents of Aleppo also complain that some rebels take unfair advantage of their position. Fighters go straight to the front of the line at bakeries to buy bread when residents have to wait hours for their turn. Some demand that wounded comrades be treated ahead of civilians at the field hospital. 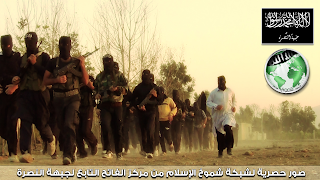 Al-Nusrah-Front-Training-Camps have also appeared online released by "administrator for the Shumukh al-Islam Network" of "the al-Fateh training camp of the Syria-based Al Nusrah," according to the SITE Intelligence Group. "Eleven of the pictures show fighters marching with their weapons, attending a lecture, and practicing with pistols, and one shows a group of masked children holding rifles and sitting while another child reads from a piece of paper," SITE reported. (See picture on left)


Support for the Syrian rebels must be cautiously administered, lest we give rise to a more brutal A-Qaeda-esqe organization.