Latest From Mali: Mali on the Brink of War!

An interesting article mentioned that Officials and locals say that foreigners are entering and leaving the new safe haven with relative ease – turning its desert dunes into a regional sinkhole for ultraconservative Islamists, exiled terrorists, and drug-smuggling opportunists – a strange breed of outlaw rule some have dubbed “gangster jihadism.” Western officials say that there is now broad consensus that a military intervention is necessary to re-take Mali’s desert north – but the problem is that what’s urgent is not necessarily what’s possible. “It’s not something that will be over in a flash, and it’s not something anyone can undertake lightly,” said a French intelligence officer specializing in foreign threats. Would you like to know more? 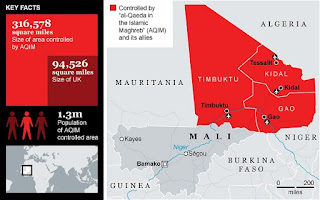 Mali’s epic implosion in the heart of West Africa is a horror scenario in action: in a weak, porous region, well-financed al-Qaeda-linked groups have secured an area the size of Texas to build a base for Islamist extremism in North and West Africa. Poor and landlocked, Mali was barely a blip on the world’s radar as the war in Libya spewed rebellious Tuareg tribesmen back into Mali last year. When they took up arms and struck bedfellow deals with al-Qaeda-linked groups, heads started to turn. Then, suddenly – after a military coup and quick rebel sweep through the north – al-Qaeda in the Islamic Maghreb and allied Islamist groups had seized all of northern Mali. World leaders, stunned, tried to gauge the threat – and then started scrambling for a policy. And, months later, the scrambling continues, with U.S., European, and African officials buzzing from capital to capital in closed door negotiations and strategizing. 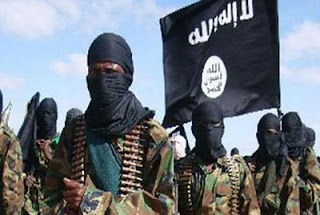 With so much still undecided; any offensive north is still at least months away, say U.S. officials. Europe and France in particular, are keenly worried. Northern Mali is barely a hop and skip across the Mediterranean, and France, Mali’s former colonizer, has a large population of Malian emigrants. A number of French nationals remain hostages of al-Qaeda-linked groups in the Sahel. Convicted Franco-Malian radical Ibrahim Ouattara was arrested this month on his way to Mopti with a fake Senegalese passport. “These are usually younger people who’ve become radicalized or are en route to radicalization, and who feel they need training and exposure to real fighting,” said a French counter-terrorism official. “And to do that they’re going to places where their ‘brother’ radicals have gained momentum—which right now is Syria and West Africa.”

Mutinous soldiers overthrew Mali's democratically elected president in March, creating a power vacuum that paved the way for Islamists to grab the north, an area the size of France. In the more than six months since then, the Islamic extremists have imposed a strict form of Shariah law. Music of all kinds has been banned, and people are not even allowed to have a ring tone on their phones, unless it's one based on Quranic recitations. Women have been flogged for failing to cover themselves. And in all three of the major towns in the north, residents have been forced to watch thieves getting their hands hacked off.

The world’s deliberations are giving the Islamist groups in northern Mali plenty of time to prepare for the inevitable. And, by most accounts, they are. Residents and authorities say that the Islamist ranks are swelling with both Malians and foreigners. “The longer this goes on, the more and more are arriving,” said Sadou Diallo, the deposed mayor of Gao, the north’s largest city. The Saharan terrain is not only a nightmare for conventional warfare, it is also lucrative to control, a prime trafficking route for cocaine and other smuggling, giving the groups money for recruitment and services. Slowly, the Islamist groups are establishing a more formal governance, instituting Shari’ah law in the main towns and spreading an administration steadily outward. On Oct. 31, for instance, Omar Ould Hamaha – military chief for the Movement for Unity and Jihad in West Africa, an al-Qaeda splinter group – came through the mid-sized town of Gossi and established a 14-man committee to administer its affairs.

In recent weeks, representatives of Ansar Dine, one of the Islamic factions operating in the north, have sent delegations to Burkina Faso and to Algeria in an effort to negotiate a solution in order to avoid a military intervention. Ansar Dine is believed to be made-up mostly of Malian fighters, whereas the two other groups are said to be primarily composed of foreign fighters, some allegedly from as far afield as Pakistan. Mediators are hoping to weaken the Islamic rebel front by peeling off the more moderate members.

About 250,000 refugees have fled from northern Mali to neighbouring countries since the rebellion began, and a further 200,000 have sought shelter in southern Mali or other places in the country.

West African leaders met at an emergency summit Sunday to plot a military strategy to wrest control of northern Mali from Islamist groups. Leaders from the 15-nation Economic Community of West African States gathered in the Nigerian capital Abuja to approve a military blueprint that will eventually be sent via the African Union to the UN Security Council for review.

Analysts and others warn of the risks a continued occupation of the north poses to countries beyond Mali. They say it could provide a safe haven to Al Qaeda-linked extremists and criminal groups. Foreign and defense ministers from five European countries -- France, Germany, Italy, Poland and Spain -- are expected to meet next Thursday to discuss a European mission to train Malian troops.