Iraq and the Sadrists!

An intriguing question was asked in an interesting article about how much influence does Iran wield in Iraq? This question has long been a matter of debate and in light of the US troop withdrawal has become all the more relevant, especially with rumors of Iranian plans to have Mahmud Shahrudi, who is an Iraqi-born member of Iran’s Guardian Council and advocates clerical involvement in government, succeed the quietist Ali al-Sistani in Najaf. On top of this a the Sadrist Movement has seen a resurgence of sorts. What does this all mean and who are the Sadrists?

Unfortunately, partisan politics on the left and right have precluded serious analysis on the subject. In any event, we can begin by noting that Iraq has close economic ties with Iran. According to the Iranian ambassador to Baghdad, quoted in a report by the Tehran Times, trade transactions between the two countries over the past Iranian calendar year (ending on 19th March 2012) amounted to more than $11 billion.

When there was a US troop presence in Iraq, Tehran provided backing for small Shi’a militant organizations known as the “Special Groups.” These militias came into increasing conflict with the central government as the sectarian civil war began to subside in 2007-8. case-in-point is the League of the Righteous, led by Qais Khazali, who is at odds with Muqtada al-Sadr and his followers that comprise an important part of the ruling coalition. By backing the groups that can give rise to internal Shi’a rivalries, Iran can increase its own influence by playing a role as mediator, adviser and kingmaker.

Linked to this point is the fact that in the aftermath of the 2010 elections, which entailed a prolonged stalemate among Iraq’s political factions, the Sadrists and the strongly pro-Iranian Islamic Supreme Council of Iraq [ISCI] eventually joined the current Prime Minister Nouri al-Maliki’s State of Law bloc on Iran’s advice. Oddly enough, both the US and Iran backed Maliki for a second term as prime minister following the 2010 elections, but of the two countries, it was Iran that showed a degree of influence on the political process in advising the Sadrists and ISCI to unite with Maliki. The US in contrast had no role in suggesting or facilitating coalition-shuffling.

It is also notable that the negotiations over the question of an extension of the US troop presence were conducted in such a way as to exclude the Sadrists from the Iraqi government’s decision-making. Besides, al-Maliki and his bloc, whose greatest concern has always been consolidation of their own power base, are aware of Sunni Arab and Kurdish anxieties about shifting towards an Iranian model of government, and accordingly, as analyst Reidar Visser notes, have been working with al-Iraqiya – the main opposition bloc – and the Kurds to block attempts by ISCI and the Islamic Virtue Party – a branch of the Sadrist movement – to introduce clerical veto in Iraqi law, such as is practiced in Iran.

When it comes to Iraqi politics, what matter more than any foreign influence are the rivalries between and within the various factions, often entailing personal power struggles going back many years.

The political crisis in Iraq seems to have become permanent, as conflict between different parties continues to escalate. Having transformed from a dispute between parties of the Iraqi List and Prime Minister Nouri Al Maliki’s State of Law, the current clash between the Kurdistan Alliance and the Sadr movement is the latest setback in efforts to form a united government in Iraq. The Iraqi List unveiled last week in the presence of more than 180 deputies sparked moved to replace Al Maliki. This consensus stems from talks held in Arbil and Najaf in April and May, with follow-up discussions to be held in Arbil in the coming weeks. It is an attempt to put an end to instability in Iraq. Despite frequent meetings, Iraqi politicians have failed to find a way out of the political crisis, resorting to tabling no-confidence motions against the government.

Some believe that the political crisis has deepened since the American withdrawal from Iraq. A member of the Iraqi List, MP Ahmad Al Masary, said: “If things get to the process of withdrawal of confidence from Al Maliki, the required number of no-confidence votes are available, even some members of the ruling National Alliance agree with this decision.” Thus, the National Alliance has two options: either to respond positively and allow the government to proceed in executing this agreement or allow the coalition to nominate a substitute for Al Maliki and form a new government headed by the alternative candidate.

The Iraqi situation depends on the future of the political process in the country, including the subject of withdrawal of confidence, which hinders the development of projects announced by the government. The leaders of the religious authority in Najaf and Karbala can act but they stand against the nominations of any figure not involved in their parties. The constitutional mechanisms for the withdrawal of confidence will freeze the political process and future development. Al Maliki appears from the exterior as being very calm in a boiling situation.

Should he be this calm, in the face of the Sadrists influence, plus who are the Sadrists? Well, the Sadrist Movement is an Iraqi Islamist national movement led by Muqtada al-Sadr. The movement draws wide support from across Iraqi society and especially from the Shi'a poor in the country. The most important person in setting the goals and the philosophy of the movement was Grand Ayatollah Mohammad Mohammad Sadeq al-Sadr. A prominent preceding influence had also been Mohammad Baqir al-Sadr. The movement is religious and populist. Its goal is a society ordered by a combination of religious laws and tribal customs. The Islamic Virtue Party is a smaller, rival branch of the Sadrist movement. During the Iraqi parliamentary election, 2010 Sadrists were part of the National Iraqi Alliance.

In a press conference on 6 March 2010 ahead of the Iraqi parliamentary election, 2010, Muqtada al-Sadr called on all Iraqis to participate in the election and support those who seek to expel U.S. troops out of the country. Al-Sadr warned that any interference by the United States will be unacceptable. Al-Sadr, who has thousands of staunch followers across Iraq has consistently opposed the presence of foreign forces and repeatedly called for an immediate end to the occupation of Iraq. 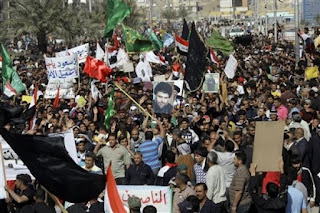 On January 5, 2011, Muqtada al-Sadr returned to the Iraqi city of Najaf, in order to take a more proactive and visible role in the new Iraqi government. Three days later, thousands of Iraqis turned out in Najaf to hear his first speech since his return, in which he called the US, Israel, and the UK "common enemies" against Iraq (see picture on left). His speech was greeted by the crowd chanting "Yes, yes for Muqtada! Yes, yes for the leader!", whilst waving Iraqi flags and al-Sadr's pictures. Subsequently, he returned to Iran to continue his studies.

By late 2011, it appeared that the US would largely withdraw from Iraq, a demand that helped make Sadr a popular leader almost immediately following the invasion. Sadr also controlled the largest bloc of parliament, and had reached a sort of détente with prime minister Nouri al Maliki, who needed Sadrist support to retain his post.

His strongest support comes from the class of dispossessed Shi‘a, like in the Sadr City area of Baghdad. Many Iraqi supporters see in him a symbol of resistance to foreign occupation.