An interesting article mentioned that a bomb exploded outside the U.S. diplomatic mission in the Libyan city of Benghazi overnight, an attack that could be retaliation for the killing, in a U.S. drone strike, of al Qaeda's Libyan second-in-command. An improvised explosive device was dropped from a passing vehicle onto the road outside the mission, in an upmarket area of central Benghazi. It exploded moments after, slightly damaging the building's gate, U.S. and Libyan officials said. Would you like to know more?

Washington had confirmed a few hours before the attack that a U.S.-operated drone had killed Abu Yahya al-Libi, a Libyan-born cleric and senior al Qaeda operative, in Pakistan. The bombing will revive concerns about the lack of security in Libya, where last year Muammar Gaddafi was overthrown in an uprising supported by NATO air power.

Experts on militant groups had predicted that the killing of Libi, described by U.S. officials as a major blow to al Qaeda, would provoke some kind of backlash in his home country.

Though he spent much of his life outside Libya, he was a member of the now-defunct Libyan Islamic Fighting Group, which fought an insurgency against Gaddafi in the 1990s, and his family is well known in Libya. Benghazi, Libya's second city, has become a focus for insurgent-style attacks in the past few months, but the overnight attack was the first time a U.S. facility in Libya had been targeted since Gaddafi was overthrown.

A jihadist theologian who rose to prominence in 2005 when he escaped US custody in Afghanistan, Abu Yahya al-Libi became a major motivational figure for Al-Qaeda, masterminding its propaganda machine. American officials have described Libi as second-in-command to Ayman al-Zawahiri but security experts say his main value was as an inspirational mouthpiece with the religious credentials other Al-Qaeda leaders lacked. Informers started giving reports about his presence in Pakistan’s North Waziristan in early 2008, placing him in Mir Ali, Datta Khel and Miranshah, three towns that have regularly come under US drone attacks.

According to the New York Times, Libi went to Afghanistan in the early 1990s before being sent back to study Islam in Mauritania. On his return he toured Al-Qaeda training camps, preaching militant Islam in a country that had fallen under the control of the extremist Taliban.
In other news, Libya’s first election in more than 40 years is scheduled in two weeks. But, some worry that the country's instability may mar the election or dim the hopes from last year’s successful revolution.

Underscoring the lack of proper security in Libya, a disgruntled volunteer militia this week occupied Tripoli international airport for several hours, leaving bullet holes in at least one jet and forcing airlines to cancel flights.
A group called the Brigades of Captive Omar Abdul Rahman, in reference to a Palestinian Islamist leader jailed in the US, claimed responsibility for the bombing in leaflets distributed by the group at the scene of the attack, said local media citing investigators at the scene.

The statement also warned the US that the group had “prepared a message that will soon reach America in response to polluting the skies of the defiant city of Derna,” an eastern Libyan city known as a bastion of Islamic militancy. 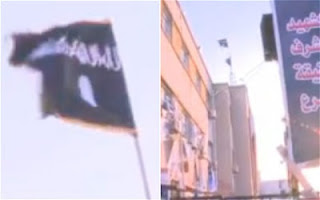 What is quite disturbing is that Benghazi seems to be the epicenter of extremism and al Qaeda influence. In November, 2011, the black flag of Al Qaeda was spotted flying over a public building in Libya, raising concerns that the country could lurch towards Muslim extremism (see picture above).

The flag, complete with Arabic script reading "there is no God but Allah" and full moon underneath, was seen flying above the Benghazi courthouse building, considered to be the seat of the revolution, according to the news website Vice.com. Vice.com also reported that Islamists had been seen driving around the city's streets, waving the Al Qaeda flag from their cars and shouting "Islamiya, Islamiya! No East, nor West".  The move towards Islamic extremism is likely to alarm many in the West who supported the ousting of Muammar Gaddafi.

In two weeks, Libyans will elect a 200-member assembly to write a constitution and select a cabinet - but the elections may be delayed.  This week, Libyan authorities’ regained control of the country's main airport after it was briefly seized by militiamen armed with heavy machine guns.

Four out of five eligible voters in Libya have registered to cast a vote.  It will be the country’s first democratic election after more than 40 years under the rule of Moammar Gadhafi.