What Terrorists can gain from Piracy!

October 11, 2011
Interesting Article: Pirate link to terrorists probed by WASSANA NANUAM / Thailand Published Sunday, October 9, 2011
A recent article in the Bangkok Post mentioned that the Combined Maritime Forces suspect Somali pirates may be linked to international terrorist groups. "The US-led CMF is investigating whether the ransoms which Somali pirates gained from hijacked cargo ship owners are being used to fund international terrorist groups," the RTN's Counter Piracy Task Group Commander Thanin Likhitwong said yesterday. Other than funding, could the terrorists get a hold of more dangerous items? 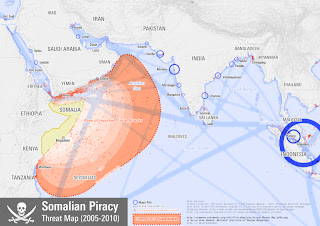 Piracy off the coast of Somalia has gained worldwide attention starting around 2005. Piracy has impeded the delivery of shipments and increased shipping expenses, costing an estimated
$15 billion a year in global trade. As of 4 October 2011, Somali pirates were holding at least 10 large ships with an estimated 251 hostages (see map on right). With the collapse of the central government, the Somali Navy ceased to exist as a fighting force. With Somali waters undefended, foreign fishing trawlers began illegally fishing in Somali waters, and ships from big companies began dumping waste off Somalia, killing fish. This led to the erosion of the fish stock. Local fishermen started to band together to protect their resources. Although most of these early defensive forays went unreported, the first recorded incident of modern piracy off the coast of Somalia occurred on May 10, 1991 near Mombasa, when Somali Patriotic Movement (SPM) militiamen hijacked a vessel belonging to the Somali Police Force that was transporting refugees to safer shores. Precise data on the current economic situation in Somalia is scarce but with an estimated per capita GDP of $600 per year, it remains one of the world's poorest countries. Millions of Somalis depend on food aid and in 2008, according to the World Bank, as much as 73% of the population lived on a daily income below $2. Many pirates are 20–35 years old and come from the region of Puntland, in northeastern Somalia. The East African Seafarers' Association estimates that there are at least five pirate gangs and a total of 1,000 armed men. The pirates get most of their weapons from Yemen, but a significant amount come from Mogadishu, Somalia's capital. Weapons dealers in the capital receive a deposit from a hawala (system used to transfer money from one person to the next) dealer on behalf of the pirates and the weapons are then driven to Puntland  where the pirates pay the balance. In 2008, (and renewed each year since then) the UN passed a resolution allowing international warships to pursue pirates into Somali territorial waters. In 2011, there were several ships that were taken that were of great importance and interest. On 15 January 2011 thirteen Somali pirates seized the Samho Jewelry, a Maltese-flagged chemical carrier operated by Samho Shipping, 650 km southeast of Muscat. The Korean Navy took action and rescued the ship and its crew. In April, 2011 the 20,989 tonne, Singapore flagged and owned vessel, a Chemical/Oil Products Tanker, was on its way to Mombasa (Kenya) from Kuala Tanjung (Malaysia) when it was attacked and hijacked. On October 10,  2011, Pirates off Nigeria's coast seized a chemical tanker and kidnapped the vessel's crew. Over the last eight months, piracy in Nigeria has escalated from low-level armed robberies to hijackings and cargo thefts, according to the Denmark-based security firm Risk Intelligence. Analysts believe some of the oil tankers targeted carry crude stolen from Nigeria's oil-rich southern delta, where thefts run into the hundreds of thousands of barrels of oil a day. Cyrus Mody of the International Maritime Bureau said Tuesday that the latest incident involved a ship that was carrying some sort of chemical or oil cargo at the time it was seized. "It's definitely the same sort of pattern," Mody said. "It's probably again to do with the stealing of cargo." What is interesting is that Al-Qaeda leader Osama bin Laden in his March 19, 2009 audio tape to the people of Somalia praised the efforts of insurgent Somali Jihadist groups, saying that they are engaged in “a war between Islam and the international Crusade,” and he described the Somali Jihadists as “one of the important armies in the Mujahidin Islamic battalion, and are the first line of defense for the Islamic world in its southwestern part.” I spoke in one of my blog entries about piracy and the connection to Al Shabaab (What is with these kidnappings in Kenya?). Well, according to a recent report on Radio Garowe, the Puntland community radio station in northern Somalia, Muslim pirates have been praised for “protecting the coast against the enemies of Allah” by Sheikh Mukhtar Robow (“Abu Mansur”), a terrorist leader and spokesman of the radical Islamist and al-Qaeda linked al-Shabaab al-Mujahedeen group (designated by the US State Department as a Global Terrorist Organization). On April 12, Sheikh Hassan Abdullah Hersi al-Turki leader of the al-Shabaab-linked Mu'askar Ras Kamboni (also designated by the US State Department as a terrorist) said on Somali radio: “I can say the pirates are part of the Mujahedeen (religious fighters), because they are in a war with Christian countries who want to misuse the Somali coast.” With support for piracy coming from individuals like this, it is not far off to believe that a chemical tanker hijacked by pirates, could have it's contents shipped to other dangerous al Qaeda-esque organizations to be used in attacks on western interests.