Who is al Qaeda's contact in the North Caucasus?

A recent article in The Moscow Times spoke about al Qaeda providing Russia's Islamist insurgency in the North Caucasus with increasing amounts of money and vocal support. Center for Strategic and International Studies (a leading think tank based in Washington DC) spoke in great length about the relationship. So who would al Qaeda turn to for a potential contact? 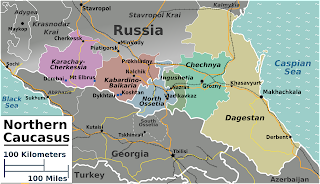 First off, a little bit about North Caucasus; The North Caucasus (or Ciscaucasia) is the northern part of the Caucasus region between the Black and Caspian Seas and within European Russia (see map on right). As part of the Russian Federation, the Northern Caucasus region is included in the North Caucasian and Southern Federal Districts. Since October 2007, separatists and Caucasus Front soldiers have claimed all of the North Caucasian regions from Karachay-Cherkessia to the Caspian Sea as part of their territory invaded by Russia during the 18th century that have expulsed most of the Caucasians towards Turkey, Bulgaria, Syria, and Jordan. In addition to being the only region of Russia in which non-Russian minorities constitute a majority, the Northern Caucasus has been Russia's most rebellious and unstable region since the beginning of the Russian conquest at the start of the 19th century. As result of this long conflict, the ethnic makeup of the region has changed dramatically. The western half of the region has largely been emptied of its former inhabitants, the Turkic people of the Crimean Khanate and the "Circassian" Adyghe. Currently, around half of Russia's 20 million Muslims live in the North Caucasus. The current conflict in the Northern Caucasus is complex. The conflict began near the fall of the Soviet Union when Chechnya, a region of the Russian ASSR, declared its independence from Russia and Russia responded with a military invasion. This mountainous region is an extraordinary patchwork of peoples and languages (Circassian, Turkic, Persian, Mongolian, and a whole host of smaller groups unrelated to any other)—the relatively small region contains an incredible 8 language families and 46 different languages (35 in Dagestan). The main portal cities to the Northern Caucasus are Stavropol and closer Mineralnye Vody in Stavropol Krai, Sochi in Krasnodar Krai, Vladikavkaz in North Ossetia, and Makhachkala in Dagestan. The main group currently fighting in the region is known as the Caucasus Emirate (also known as the Caucasian Emirate). The organization is a virtual state entity and partial successor to the Chechen Republic of Ichkeria (the unrecognized secessionist government of Chechnya. The republic was proclaimed in late 1991 and fought two wars between separatists and the Russian Federation which denounced secession. Diplomatic relations with Ichkeria were once established by the partially recognized Islamic Emirate of Afghanistan under the Taliban government on January 16, 2000). The Caucasus Emirate was unofficially declared as an organization and a state on October 31, 2007. The leader (or emir) that declared this is Doku (Dokka) Khamatovich Umarov (also called by the Arabized name of "Dokka Abu Usman"). Umarov is part of the Malkoy teip clan (the same clan as the warlord Arbi Barayev and the Chechen ex-foreign minister Ilyas Akhmadov) from the small village of Kharsenoi (Kharsenoy) in Shatoysky District region in southern Chechnya. Although Umarov was either in Moscow or the Tyumen Oblast when the first Russian-Chechen war began in December 1994, he returned to Chechnya. Following the Khasav-Yurt Accord that ended the first Chechen war in 1996, Umarov was appointed by the leader of the Chechen separatist movement and the third President of the Chechen Republic of Ichkeria (Aslan Aliyevich Maskhadov) to head the Chechen Security Council. Umarov began the Second Chechen War, in a later phase (better known as the War in the North Caucasus) in September 1999 as a field commander. Umarov eventually became the commander of Southwestern Front, the terrorist military region southwest of Grozny that bordered on Georgia and the Russian republic of Ingushetia. By early 2006 he was the 'vice-president' of the separatist government and on June 17, 2006, he became 'president' (he also claims to be the head of the State Defense Council; Amir (commander) of the Madzhlis Shura of the Caucasus; Supreme Commander of the Armed Forces of the Chechen Republic of Ichkeria; and finally, Amir of the Mujahideen of the Caucasus). On October 7, 2007, Umarov proclaimed the Caucasus Emirate (aimed at uniting Northern Caucasus into a single Islamic state) and at once declared himself its Emir, thereby converting the Chechen Republic of Ichkeria into a vilayat (province) of the new emirate. The Caucaus Emirate was officially labeled by Russia as a terrorist organization in January 2010. The same month, in a statement, Umarov said that he had re-created a "Brigade of Martyrs" that will operate in the Russian cities outside the Caucasus. On March 31, 2010 Umarov claimed responsibility for personally ordering the Moscow Metro bombings which took the lives of 40 civilians and injured over 60. On February 7, 2011 Umarov claimed responsibility in a video posted online for ordering a suicide bombing at Domodedovo International Airport, Russia's busiest airport. The bombing killed 36 people, and was described by Umarov as a "special operation," targeting both the Russian people and Prime Minister Vladimir Putin. Al Qaeda has taken notice, and according to the think tank report, an arrest by Czech police in May of eight individuals in Prague (suspected of plotting attacks in the North Caucasus) included a Chechen and Dagestanis who had trained in Afghanistan and Pakistan. In February, Umarov emphasized that the Caucasus Emirate will be integrated into global jihad. He soon went into hiding but as of June 2011, there are reports that he may be operating from the mountainous Jeyrakh district of southern Ingushetia or alternatively in the forested uplands on the border between Sunzha and the neighboring Chechen district of Achkhoi-Martan. Umarov's actions in Russia show that he is serious and that he is not only active, but potentially even more deadly because of his logistical capabilities and drive to employ suicide bombings against civilians. Al Qaeda will soon reach out to him for more actions, what the result will be is yet to be seen, but the quicker we find him, the safer the citizens of Russia will be.