An interesting article mentioned that three top leaders of Al-Qaeda in the Islamic Maghreb (AQIM) are in the Malian city Timbuktu which was seized on Monday by Islamists seeking to impose sharia law, religious and security sources said. Would you like to know more? 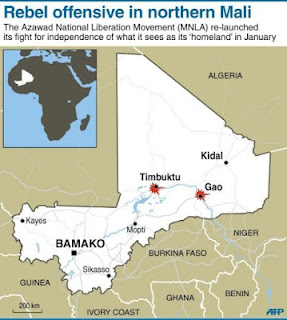 The three Algerians are Abou Zeid, Mokhtar Belmokhtar and Yahya Abou Al-Hammam. They have appeared on the flanks of renowned Tuareg rebel Iyad Ag Ghaly who leads the Islamist Ansar Dine movement, which has seized Timbuktu. A security source said the Al-Qaeda leaders “took part in a meeting with Iyad Ag Ghaly and the town imams.”

A source close to the imams who took part in the meeting confirmed this on condition of anonymity. “Yes all three are there. Abou Zeid said he is happy to be on the Muslim soil of Mali,” he said. The security source said they have made the Timbuktu military camp, seized from the army by Islamists and Tuareg rebels on Sunday, their base. Witnesses say Ag Ghaly is in complete control of the fabled city with the support of AQIM, but he needs to convince the town’s religious leaders to accept his authority. He wants to impose sharia law. Ansar Dine had seized Timbuktu fighting alongside Tuareg rebels who hope to gain independence for their traditional homeland, but Ag Ghaly chased out his erstwhile allies on Monday.

The ancient city was founded by Tuareg nomads in the 11th century. A rich trading point for gold and salt at the crossroads between north and West Africa, the city became a melting pot of Arab, Berber and black African cultures. Timbuktu was first conquered by Tuareg rebels belonging to the Azawad National Liberation Movement. Eye witnesses say that the legendary city in the Mali desert fell into the hands of "Ansar Eddine" Islamic extremists, who call themselves "Defenders of Faith". The latter are a group close to al-Qaeda, led by the fundamentalist leader Iyad ag Ghaly.
Jihadists have consolidated the control of Timbuktu and even driven out the Tuaregs, whom they had conquered it with yesterday.

The Tuareg's air of liberty, too, wafts through West Africa's Sahelian region. Last week's military takeover in Mali enabled the Tuareg people to form an Islamist emirate on a high-profile regional scale. The Tuareg captured Gao, the largest city in northern Mali and the capital of the medieval Songhai Empire. From their tentative capital, the northern oasis town of Kidal, they proclaimed the construction of a continental, trans-Saharan chain of political Islamic governance. The Tuareg are overwhelmingly Muslim, but they are not Arab. Yet, their black African neighbors to the south -- even though also predominantly Muslim -- see the Tuareg as a race apart and as more politically and racially affiliated to Arabs, a moot point since the Tuareg themselves know better. The Tuareg people see themselves historically as discriminated against by both Arabs and black Africans. The Tuareg, divided into several tribal groupings and dispersed over several Saharan and Sahelian nations including Algeria, Burkina Faso, Libya, Mali, Mauritania and Niger, were seen collectively as protégés of the late Libyan leader Muammar Gaddafi. They were instrumental in orchestrating his Saharan incursions.

Ironically, they also constituted the bulk of the militant Islamist movements that sprouted all over the Sahara including Ansar Al-Din and Al-Qaeda in the Islamic Maghreb. Gaddafi was either scurrilously oblivious to the Tuareg tribes' infiltration into the underworld of Saharan political Islam or he deliberately tolerated the Tuareg's penetration of these militant Islamist groups in order to act as fifth columns of his secularist and quasi-socialist empire.

A protracted political deadlock in Mali can only strengthen the political resolve of the Tuareg to establish an independent state in northern Mali. However, that state is highly unlikely to be recognized by any of its neighbors. Algeria, the most powerful military force in the region cannot contemplate an independent Tuareg state on its southern borders. Libya, with Gaddafi's demise, is too embroiled in its domestic struggles and Mali, Mauritania and Niger are too weak militarily to thwart the Tuareg uprisings without Western assistance.

The Malian civil war (1990-96) took place between Tuareg secessionists and the central authorities in the Malian capital Bamako. The war alienated many ethnic Tuareg from the Malian state even though the government of ousted president Toure deliberately attempted to integrate the Tuareg politically into the nascent Malian democracy. The black flag of Al-Qaeda affiliated Ansar Al-Dine flying over Timbuktu sent shock waves throughout the region. So is there a working relationship, a marriage of convenience, between the Tuareg secessionist groups and the new rulers of Libya -- the Transitional National Council (NTC).

The earthen adobe architectural wonders of Timbuktu -- the great mosques of Djingareyeber, Sankore and Sidi Yehia unique in Africa and the Islamic world -- cannot be left in the hands of the nomadic Tuareg, the Malian authorities contend. Timbuktu, the ancient seat of learning famed for its now lay in ruin, destroyed in 1591 not by desertification, but by invading Moroccan marauders.

The loss of its uranium producing northern wasteland s cannot be discounted as a source of calamity as far as Mali's coffers are concerned. If the north secedes the ripple effects will reverberate throughout the region. It is the feeling of shame that will come to haunt Mali and instill the spirit of fear in its neighbors. The Blue Men of the Desert, as the Tuareg are often described have certainly made their mark.

France on Thursday ruled out a “military solution” in its former colony of Mali to counter rebels in the north, who announced that they had achieved their territorial objectives and sought outside backing for a secessionist state they call Azawad. In Paris, the French Foreign Minister, Alain Juppé, told reporters that there would be “no military solution with the Tuaregs. There needs to be a political solution.” He urged regional powers like Algeria, Mauretania and others to press for a political settlement.

The NTC's relationship with the new political parties now being formed in Libya is a much more intriguing case, with the Islamists on both sides of the equation. In Libya are inching closer to power, possibly through the ballot box. How much influence developments in Libya will have on its neighbors to the south is hard to say.

Following the coup, the European Union, the United States and other Western powers suspended hundreds of millions of dollars of support for landlocked Mali except for emergency aid to drought-hit regions. Washington, which has warned the region was becoming a new hub for Al-Qaeda, on Friday supported ECOWAS’s efforts to force the junta to step down, but said it was concerned with the latest rebel advances. The Tuareg offensive has caused more than 200,000 people to flee their homes in the remote region that is also a hub for arms and drug trafficking.