An interesting article mentioned that there are unconfirmed reports that dozens of Nigeria’s Islamist Boko Haram militants are assisting Al-Qaeda in the Islamic Maghreb (AQIM) in the City of Gao are adding to the confusion surrounding the fluid and chaotic security situation in Northern Mali. The potential involvement of Nigerians alongside Algerian, Malian, Mauritanian and Sahrawi militants in terror activities on the Algerian borders is a major embarrassment to Algeria’s Military security Agency (DRS). Would you like to know more? 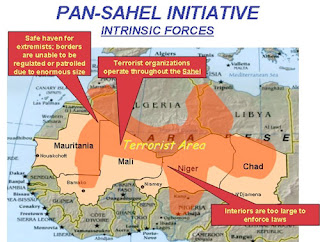 The Algerian public still reeling from the news of the kidnapping of seven Algerian diplomats, including the consul in Gao in Northern Mali, begins to question their government security policy in the Sahel. An AQIM splinter group calling itself the Movement for Unity and Jihad in West Africa (MUJAO) claimed responsibility for the diplomats capture. This is not MUJAO first operation targeting Algeria. Last year, This “recent” terror group claimed responsibility for the October 2011kidnapping of three European aid workers from the Polisario camps in Tindouf, Algeria, and for the March 3, 2012 terror attack in Tamanrasset in the Algerian Sahara.

Algeria, the largest Army in North Africa seems unable to control its own borders. Mali, once the DRS backyard, is now in chaos and perceives the intentions of the Algerian government with qualms. The DRS predicted a Tuareg rebellion in the aftermath of the collapse of the Gaddafi regime in Libya but failed to design a strategy on how to deal with the ramifications of the insurgency.

In Mali, the DRS financed and sponsored Tuareg movements that align itself with Algeria. Fearing a revolt of their Tuareg population in the Hoggar region, Algeria based its strategy on controlling Malian Touareg groups and “dictating” Malian policies as not to upset the status-quo. Mali’s backing of Algeria pro-independence movement in the Western Sahara is a prime example of Algeria’s double talk. While opposing its own Tuareg’s  self-determination demands in the North and to  please Algeria, Mali was compel to recognize the Sahrawi rights to independence in the Western Sahara not fat form the Azawad.

“There are a good 100 Boko Haram fighters in Gao. They are Nigerians and from Niger,” said Abu Sidibe, a regional deputy. “They’re not hiding. Some are even able to speak in the local tongue, explaining that they are Boko Haram.”

MUJAO is said to have broken off from the main group, Al-Qaeda in the Islamic Maghreb (AQIM), in order to spread jihad to west Africa rather than confine themselves just to the Maghreb or Sahel regions. Boko Haram, which has also kidnapped westerners in Nigeria, has been blamed for a series of attacks over Easter weekend in northern Nigeria that left at least 45 dead.
Mokhtar Belmokhtar, one of the leaders of AQIM, was also spotted over the weekend in Gao, witnesses said.

Touareg separatists pushed Mali's military out of the north of the country over the past few weeks. Their offensive was helped by weapons smuggled out of nearby Libya and by the distraction caused by a military coup in Mali's capital, Bamako.

Boko Haram, which loosely translates into “against Western education” in the Hausa language, has grabbed headlines in Nigeria in recent years for its lethal attacks on military barracks and police stations throughout northern Nigeria. But over the past year Boko Haram’s attacks have become more complex and directed at Christian civilians.

Senior public officials — including the head of the United States Africa Command (Africom), Carter Ham, and Owoye Azazi, the security adviser to Goodluck Jonathan — have stated their belief that there is a connection between Boko Haram and the global terror network al-Qaeda. But scholars and security analysts remain sceptical. Yet Boko Haram does appear to be exhibiting certain characteristics of the global terrorist franchise, among them, the release of video messages, the use of suicide bombers, attacks on symbolic targets over the past year — such as the UN headquarters in Abuja — and continuing attacks on churches.

While AQIM has affiliated itself with al-Qaeda in name, some analysts question the substance of its ideological ties. Laurence Aïda Ammour, a specialist on security in the Sahel region at the Bordeaux Institute for Political Sciences, argues that there is no coherent ideology that binds AQIM.  ”The ideological, political and religious elements aren’t really there,” she says. “AQIM mix the abduction of foreigners, car and cigarette smuggling, drug trafficking and arms dealing and many consider AQIM’s motivations more criminal than political or religious.”

Islamic fundamentalism is nothing new in Nigeria. In the 1970s a movement known as Maitatsine emerged as a result of the popularity of a Cameroonian imam, known has Marwa, who was based in Kano and preached against perceived government oppression. Marwa was killed in 1980 by security forces and the group disbanded. But in 2000, an organisation dubbed “the Nigerian Taliban” emerged, which preached against Western culture and for the imposition of sharia law throughout Nigeria. However, the group clashed with security forces and dissipated in 2004.

Boko Haram emerged around this time when an imam named Mohammed Yusuf began forming schools and teaching radical Islamic ideology. He also preached the need to impose sharia law across Nigeria’s northern states. Police arrested Yusuf who later died in custody in 2009. In a report released later that year Human Rights Watch said Nigerian security forces had carried out human rights violations and extra-judicial killings in their pursuit of the Boko Haram, among them the killing of Yusuf — despite denials by the Nigerian authorities. After the death of its leader, Boko Haram began its campaign of violent attacks against police stations and military installations.

Over the past year Boko Haram has committed increasingly sophisticated attacks, which seems to support to this claim of the group having received training outside of Nigeria. Deputy director for the Bureau of African Affairs in the Office of West African Affairs, Jason Small says the US is currently aiding the Nigerian government in the form of training of military and police officers. Small says the US government does not view Boko Haram as an anti-Western group, but is cautious of the perception US engagement with the Nigerian government by northern Nigerians.