An interesting article mentioned that latest developments in regard to the Saudi official that was kidnapped in Yemen. Would you like to know more? 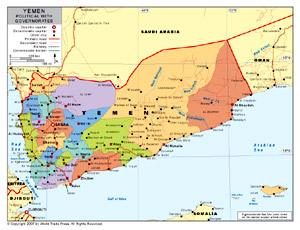 A suspected al Qaeda militant who claimed responsibility for the kidnapping of a Saudi Arabian diplomat in Yemen has warned that his group will "prepare the knives" unless their demands are met, an official Saudi spokesman said on Tuesday. Mishaal Mohammed Rasheed al-Shodoukhi, who was named on a list of fugitive al Qaeda militants by the Saudi authorities in 2009, phoned the Saudi embassy in Yemen to demand a ransom and the release of militants in Saudi prisons, the spokesman said.

He also threatened more attacks including an embassy bombing and the assassination of a Saudi prince. Abdallah al-Khalidi, the kingdom's deputy consul, was kidnapped outside his residence in the south Yemen port of Aden on March 28.

Yemen's political turmoil has strengthened Islamist insurgents in the country, leading to their takeover of some cities in the south of the impoverished Arabian Peninsula state. They are allied with a regional wing of al Qaeda that has sworn to bring down neighboring Saudi Arabia's ruling family. A string of security officials have been assassinated in recent months in south Yemen, where an Islamist group linked to al Qaeda has seized territory and claimed responsibility for attacks on Yemeni troops and a U.S. security team last month. Separately, a suicide car bomber killed four people including three soldiers and wounded four other people on Tuesday near the southern town of Lawder, Yemen's Defence Ministry said in a statement. The bomber blew himself up at the army checkpoint, according to the ministry.

In other news, inmates of the Central Prison in the northern Yemeni province of Hajjah continued their sit-in demonstration for the second day in protest over the delaying of their cases by courts and prosecutions. Police attempted to disperse the crowd with tear gas and firing live shots in the sky, leaving at least 40 prisoners wounded, 7 of whom are in critical conditions. The injured inmates were rushed to the Saudi Hospital for treatment, local security source was quoted as saying. The prisoners started their sit-in rally yesterday demanding that the authorities revamp the bad services and conditions of the prison, and that the prosecutions and courts stop neglecting their cases. The protesters also complain of bad health conditions that prompted infectious diseases to spread among them.

The Riots police was called in to deal with the protesters. They used more than 25 tear gas bombs in a bid to disperse the prisoners after the provincial security chief, and the head of Hajjah prosecution failed to convince the them to stop their protests, the paper said, citing sources from the prison.

Yesterday afternoon, one of the protesting prisoners attacked the jail director, Yahia al-Mualmi, by stabbing him right in the neck with a sharp dagger. However, al-Maualmi injury was described as light and his health condition as stable by doctors. We have been attacked in the presence of the provincial security chief and the provincial prosecutor as we refused to listen to them and stop our protests, a prisoner was quoted saying. The police presence was at least doubled in and around the prison and strict security measures were taken to foil any potential collective escape of prisoners after the riots on Monday.

Surprisingly, an EIU analyst said the Saudi government has not negotiated with high-level al-Qaida figures in the past because the group is dedicated to overthrowing the Saudi monarchy. But he said the Saudis have shown a "considerable willingness" to engage with lower-level militants. (Saudi Arabia has tried to re-educate al-Qaida members, teaching them a "new path within Islam, away from violence and toward a more peaceful form of jihad." He said these efforts are aimed at assimilating militants into local tribes and stripping them away from the central organization.)

On more disturbing news, mines and other explosive remnants of war (ERW) have killed 27 people and injured at least 36 in the last two months in Hajjah Governorate, northwestern Yemen, according to a 14 April Interior Ministry report. Many of the injured will be left permanently disabled. Children are particularly at risk and the situation is hampering the return of thousands of internally displaced persons (IDPs), according to Hajjah Deputy Governor Ismail Mahim.

Mansour al-Azi, director of Yemen’s National Mine Action Program (NMAP), said there were plans to deploy teams this week to carry out mine risk education campaigns in two badly affected districts, Kusher and Mestaba, but no decision had been taken because “the situation is still fluid.” Unofficial estimates indicate that at least 3,000 landmines have been planted in Kusher and Mestaba since sectarian clashes first broke out in November 2011, the local independent news website marebpress.net reported on 24 March.

In nearby Sa’dah Governorate, Abdulaziz Hanash, a coordinator for landmine victims, was quoted by local media as saying over 2,000 people had been handicapped by mines and ERW. “No one talks about these victims… Many people have not only lost their homes, jobs or members of their family, but also a limb or an ability.” According to the Landmine and Cluster Munitions Monitor, Yemen is contaminated with mines and unexploded ordnance as a result of conflicts dating back to 1962. Most mines were laid in border areas between northern and southern Yemen prior to unification in 1990.

As of August 2008, all governorates were contaminated.