An interesting article mentioned that Al-Qaeda and Islamists are working together to implement their own plan for the future of Timbuktu. Malians will have a new governor for the region, without ever casting a vote. Would you like to know more? 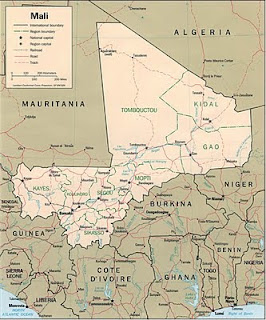 Ansar al-Din (Supporters of the Faith) reportedly plans to install Algerian national and al-Qaeda emir Yahya Abou Al-Hammam (real name Jemal Oukacha) as the local governor. Al-Hammam has lived in the region for several years, local sources said. The governor appointment is part of the Islamists' partnership with al-Qaeda in the Islamic Maghreb (AQIM).

"The Mujahideen and Ansar Al-Din have committed themselves to introducing Sharia law. One of our main ways of imposing the religion is to fight all those who reject Sharia law." He is getting help with his sharia strategy from some of the top AQIM figures. On April 3rd, AQIM leaders Mokhtar Belmokhtar (aka "Laaouar"), Abou Zeid, and Yahya Abou Al-Hammam joined Ag Ghaly for "a meeting with the city's imams", said Cheikh El Bakaye, a family member of one of the clerics involved in the talks.

They have turned the former Malian army camp at Timbuktu into their "base", according to a Malian army officer. The majority of the thirteen western hostages being held in the Sahel, six of whom are French, were abducted by these three men. According to Mohamed Askia, a Timbuktu resident, they claimed they came to congratulate "their brothers from Ansar al-Din" and to lend their support in enforcing Islamic Sharia law.

In Timbuktu, concern grew the day after an operation by Islamists from the armed Ansar al-Din movement, supported by AQIM, who took control of the most important historic manuscript centre in Timbuktu, which is listed as a UNESCO world heritage site.

Attempting to understand what “Islamism” is, we have an important case underway right not in Gao and Timbuktu, northern Mali. The situation in northern Mali, since the outbreak of a Tuareg-led rebellion in January of this year, has been complex. The Moor Next Door and Andrew Lebovich have recently analyzed the proliferation of armed groups in the region, and I suggest reading their work for more background information. To cut a long story short, Timbuktu and Gao are two of the three regional capitals of the “Azawad,” the territory that the Tuareg-led National Movement for the Liberation of the Azawad (MNLA) claims to have liberated. Yet it appears that Ancar Dine (Arabic: “Defenders of the Faith”) and even Al Qaeda in the Islamic Maghreb (AQIM) have the greatest sway in Timbuktu at the moment, and perhaps in Gao as well. Ancar Dine in particular is establishing a political administration based heavily on offering services to civilians, especially but not only in the realm of security.

From Timbuktu, there have been reports of Ancar Dine distributing food and offering care (French; h/t Andrew Lebovich).

How these efforts fit with the larger aim of instituting “shari’a” in northern Mali remains to be seen; the immediate aims seem to be (1) recruitment, (2) staking out political turf, and (3) attempting to establish long-term relationships with local populations. Imposing law and order is, of course, not just a means of outreach to locals but also a requirement for solidifying control over an area.

The next step the Islamists want to take seems to be fleshing out their administrative structure.

Magharebia reports that Ancar Dine “plans to install Algerian national and al-Qaeda emir Yahya Abou Al-Hammam (real name Jemal Oukacha) as the local governor.” From the rhetoric quoted in the article, it sounds like law and order will continue to be the emphasis for both groups.
Ancar Dine, according to almost every report, has a real partnership with AQIM. But in light of the efforts at law and order, and providing services, how compatible are the two groups, really? And how compatible is the goal of establishing political control with the goals of a terrorist organization? As Magharebia points out, AQIM still holds several Western hostages. On top of that, a Swiss woman was kidnapped over the weekend in Timbuktu by unknown gunmen. Ancar Dine may find that such incidents threaten its political aims. Perhaps hardliners would argue that kidnapping outsiders has no bearing on the security of locals or locals’ perception of the would-be administrators, but it seems to me that the violence, secrecy, money, and outside attention associated with kidnapping could easily disrupt larger efforts at stability. Ancar Dine may well be quite unhappy with the kidnappers, whether they are AQIM or not.

Stepping back, Ancar Dine certainly has a strategy for establishing a durable presence in northern Mali. One of their biggest problems, though, is time. The Malian national army or an outside military coalition hope to return to northern Mali at some point soon, while MNLA hopes to establish its own supremacy. And locals may soon – or already – be disillusioned with the fighting, the uncertainty, and the attempts to turn ideology into policy.