A USA Today article mentioned that Iran may move its nuclear enrichment plants to safer locations if necessary. Gholam Reza Jalali, who commands an anti-sabotage unit in the powerful Revolutionary Guard, said the vulnerability of Iran's nuclear facilities from a possible strike is "already minimal" but that the move still may go through for their better protection. Iran's main uranium enrichment site in Natanz in central Iran is built partly underground while the long-secret Fordo facility was built deep inside a mountain as a precaution from aerial attacks. Jalili said the existing infrastructure has already been "a kind of deterrent" against attacks. So what is the latest on Iran's Nuclear ambitions? 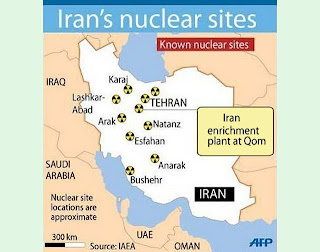 Gholam Reza Jalali's unit was set up on an order from Iran's Supreme Leader Ayatollah Ali Khamenei, and is tasked with reducing the possibility and minimizing damage from potential military action against Iran. Natanz is of key concern since it is the country's main enrichment site and the location of the bulk of its centrifuges — machines that are used for enriching uranium in a technology that can produce either fuel for power plants or fissile material for a nuclear warhead. Natanz computers have been the target of a cyber attack in 2009 and experts there have had to battle a powerful computer worm known as Stuxnet, which has the ability to send centrifuges spinning out of control. Iran acknowledged Stuxnet affected a limited number of centrifuges at Natanz but said its scientists discovered and neutralized the malware before it could cause serious damage. Jalali did not elaborate on possible sites for the relocation of nuclear facilities but such an effort would be hugely complicated and would require places able to store the technology safely. In August, Iran announced it was moving some of its centrifuges to Fordo, just north of the holy city of Qom, because that site offered better protection from possible airstrikes but did not later elaborate on the move or say whether the centrifuges came from Natanz. Iran has been on a defensive path these days. In fact, very recently, an Iranian lawmaker mentioned that Iran will utilize all its possibilities and capacities to defend its territories and closing the Strait of Hormuz is one of these options, warning that Iran will close the waterway in case it comes under attack. Iran vehemently denies charges that Iran is seeking a nuclear weapon, insisting that its nuclear program is for peaceful purposes only. On Wednesday of this week, Iran's intelligence chief visited Riyadh for talks with senior Saudi officials on security and political issues, a rare high-level session amid growing tensions between two Persian Gulf powers that have competed for influence in the region. Saudi officials have intensified accusations against Iran in recent weeks, charging Tehran with inciting political unrest and a potential nuclear-arms race in the Middle East. The Obama administration is concerned Iran is on the verge of enriching uranium at a facility deep underground near the Muslim holy city of Qom, a move that may strengthen those advocating tougher action to stop Iran’s suspected atomic weapons program. Iranian nuclear scientists at the Fordo facility appear to be within weeks of producing 20 percent enriched uranium, according to Iran analysts and nuclear specialists in close communication with U.S. officials and atomic inspectors. Enriched uranium is used to fuel power plants and reactors, and may be further processed into atomic weapons material. Iran’s accumulation of low-enriched uranium, its decision to enrich to nearly 20 percent “when there is no justification for it,” its hardening of sites, and other “activities related to possible weaponization” are factors that “affect the Israeli calculus and ours,” Ross, now a counselor at the Washington Institute for Near East Policy, said in an e-mail. “Qom is important, but it is worth remembering that IAEA inspectors go there, and I would not isolate Qom and say this alone is the Israeli red-line” to spur a military response. Last month, the UN’s International Atomic Energy Agency reported Iran moved a large cylinder of 5 percent enriched uranium from the Natanz fuel enrichment plant to the Fordo facility near Qom. Iranian nuclear engineers have installed centrifuges that need only to be connected to cooling and electric lines to become operational, the IAEA said. At the current rate, Nuclear physicist David Albright, founder of the independent Institute for Science and International Security in Washington and a former weapons inspector, said, it would likely take Iran till the end of 2013 to enrich enough 20 percent uranium to be further processed for use in one bomb. If Iran were to get three sets of new generation centrifuges working at Fordo and Natanz, they could produce enough material by the end of next year that could be further enriched to weapons-grade. Recently, reports from Moscow appeared to provide more evidence of Iran’s ambition to build a nuclear bomb. Russian customs agents said today morning they found 18 pieces of radioactive metal in the luggage of a passenger bound for Tehran. A radiation detector at the airport identified the luggage, which had levels of radiation 20 times the limit. In addition, according to Foreign Minister Ali Akbar Salehi, "within the next two months the first fuel plate which is produced with the 20 percent enriched uranium will be placed in Tehran's research reactor". The International Atomic Energy Agency in November released its most damning report yet on Iran's nuclear activities, saying it had evidence suggesting research into atomic warheads had been carried out. With these movements taking place, Iran is moving into a dangerous area that can provide no safe guards for the rest of us, unless action is taken.