Who will be the leader of North Korea now?

Kim Jong Il died on Saturday of a heart attack while on a train, North Korea's state media said. A television news announcer, dressed in black and her voice quivering with emotion, said Monday the nation would unite behind Kim Jong Il's third son, Kim Jong Eun, as North Korea's new leader. Although the succession plan has been laid out for many months, the elder Kim's sudden death comes as Kim Jong Eun, believed to be 27 or 28 years old, has had little time to develop a power base. To preserve its power, the Kim family will have to work closely with the North Korean military. Kim Jong Il maintained a low profile after taking power following the death of his father in 1994 while he courted military leaders and tried to consolidate his power. The death of the elder Kim will also put on hold talks between North Korea, the U.S. and South Korea that appeared to be making some headway. So who is Kim Jong Eun? 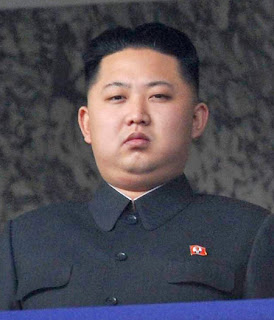 Kim Jong-Eun is the third and youngest son (see picture on right) of the late North Korean leader Kim Jong-il and his consort Ko Young-hee. Following the announcement of his father's death, Kim Jong-un was announced as the "Great Successor" by North Korean state television. He is a Daejang in the Korean People's Army, a military rank equivalent to that of a (full) General. Kim is said to have studied computer science privately in Korea. attended the English-language International School of Berne, Switzerland until 1998 under a pseudonym. Former classmates have asserted that he attended Gümlingen International School or Liebefeld public school. His pseudonym at Gümlingen was "Pak Chol" and he pretended to be the son of a driver, although in Liebefeld, the teacher told the class that he was from North Korea. For many years, only one confirmed photograph of him was known outside North Korea, apparently taken in the mid-1990s, when he was eleven. The first official image of him as an adult was a group photograph released on 30 September 2010 at the end of the party conference that effectively anointed him, in which he is seated in the front row, two places from his father. This was followed by newsreel footage of him attending the conference. His eldest half-brother, Kim Jong-nam, had been the favorite to succeed, but reportedly fell out of favor after 2001, when he was caught attempting to enter Japan on a fake passport to visit Tokyo Disneyland. Some analysts believe that following Kim Jong-il's death, Jong-un's uncle Chang Sung-taek will act as regent, as Jong-un is presently too inexperienced to immediately lead the country. Experts say the young Kim is likely to follow the same militaristic path, maintaining a strong grip over one of the world's largest armies and pressing on with a nuclear weapons program in the face of international outrage. Korea's military was immediately put on alert after the announcement of the leaders death and its National Security Council convened for an emergency meeting, out of concern that political jockeying in North Korea could destabilize the region. Asian stock markets fell soon after the announcement, due to similar concerns. Michael O’Hanlon, a senior fellow at the Brookings Institution, believes that we will see North Korea continue don the path is has because, as he puts it, “a competition for power is perhaps more likely in the event that the Kims try to become reformers—and maybe that’s one more reason that they’re not trying,” he said. “Kim is well aware that if his son becomes the dove in the equation, as the inexperienced, doe-faced youngster with a reformist agenda, he doesn’t stand a chance inside of a North Korea with these hardliners in positions of authority.” Any type of struggle for power could conceivably devolve into civil war. Among the immediate concerns would be who controls North Korea’s nuclear weapons; there is also the issue of ensuring that the North Korean people don’t starve as their leaders duke it out. A Council on Foreign Relations report released in January suggested a military coup was another (frightening) possibility. Many analysts have noted that Kim Jong Il uses a tactic of ‘divide and rule’ to stay in power. Within the North Korean elite several factions are opposing each other, and it is only their ‘Dear Leader’ that holds them together. These factions are also supporting different successors for Kim. Next to groups who support Kim Jong Un, especially Kim’s eldest son, Kim Jong Nam, is said to have quite some support within the elite. Individuals who have supported Kim Jong Nam during the last years, are said to fear for their lives when Kim Jong Un and his supporters will come to power. Analysts also believe that if there is an internal power struggle China will want to prevent the struggle to
seep through from the top toward lower governmental levels. China will intervene at an early stage of the power struggle by replacing the top level by a Chinese-minded puppet government that will take firm control of the country. Predicting developments on the Korean peninsula is a dangerous activity, because few affairs are as capricious as national and international politics. Nevertheless, it seems most plausible that North Korea will survive almost unchanged for another decade or two, and the region will continue to be a sore point for the west.