An interesting article in Guardian Newspaper mentioned that tens of thousands of Syrian demonstrators took to the streets of Homs during a visit by Arab League monitors; to protest against alleged mass killings of civilians and prevent what some warned would be a whitewash inspection. The army appeared to withdraw some tanks from Homs hours before the Arab League visit, after pounding rebel districts the previous day. But opposition activists alleged that many tanks had been hidden in government facilities for the visit and that snipers were opening fire on people trying to recover bodies from ruined buildings. What is the latest in Syria? 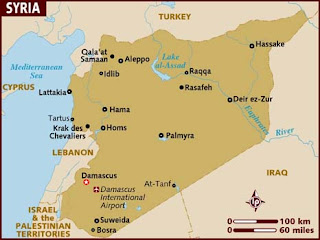 The people of Homs (see map on right) have been awaiting the arrival of the monitors, who are supposed to determine if Assad is keeping his word by withdrawing the army from civilian areas. Protesters appeared determined to show the Arab League observers the scale of the damage to residential neighborhoods, concerned that the inspection could be stage-managed by the government. The Syrian National Council (SNC), the main umbrella group of opponents to President Bashar al-Assad, said the observers were "being held prisoners by the Syrian system". In a video sent to Reuters news agency by activists, residents of the rebel district of Baba Amr pleaded with monitors to inspect the area. "Come and see, they are slaughtering us I swear," a man yelled. Another video, ostensibly from Baba Amr, showed corpses among the ruins. Witnesses reported that sporadic shooting and shelling continued in the district. A video posted on opposition websites showed vehicles accelerating to avoid gunfire. It is impossible to confirm the authenticity of such videos. Most foreign journalists are not being allowed into Syria. Recently, saboteurs blew up a gas pipeline in the flashpoint Syrian region of Homs on Tuesday, the official Sana news agency reported, as Arab League observers visited the provincial capital. The latest explosion is the fifth reported attack on energy infrastructure since the outbreak of Syria's unprecedented pro-reform protest movement in mid-March. Security forces have also assaulted demonstrators in Homs and Hama, the British-based Syrian Observatory for Human Rights, an opposition activist group with contacts across the country, said more than 70,000 protesters tried to enter Clock Square but security forces used tear gas to disperse them. In Hama, another restive Syrian city, videos with scenes of demonstrators and sounds of gunfire surfaced. Avaaz, a political activist group, said "mass demonstrations took place in Hama today after news reached the city of the arrival of the Arab League observers. Demonstrators attempted to reach al Assi Square but were stopped when security forces opened fire at them." The Arab League fact-finding team is visiting Syria this week to assess whether the government is upholding a commitment to end a brutal crackdown on anti-government protesters, now in its 10th month. The observers are monitoring an Arab League initiative that calls for President Bashar al-Assad's security forces to withdraw from cities, release detainees and end all forms of violence. The monitors arrived amid what opposition members said was a deadly military siege in recent days against protesters in Homs, Syria's third-largest city. The uprising launched the Free Syrian Army, a rebel force made up of military defectors, and efforts to create a breakaway government. Other opposition groups, most notably the Syrian National Council, have emerged as well. The Arab League has expelled Syria over its crackdown. But many question how effective the visit by league observers will be. Al-Assad has been under enormous international pressure to end the violence from the Arab League, Turkey, the United States, and the European Union. More than 5,000 people have died since al-Assad began the crackdown in mid-March on anti-government protesters calling for his ouster, the United Nations said earlier this month. But opposition groups and political activists say the toll is much higher. But activist groups, such as Avaaz and LCC, put the toll at more than 6,000.