Somalia, Piracy and How to Stop it!

An interesting article mentioned that a satellite study has shown for the first time where Somali pirates are putting the proceeds of crime – and suggests where strategies against their banditry might and might not work. Warships from 30 nations patrol the waters off Somalia but still piracy continues, costing $12 billion a year. The naval threat just makes pirates squeeze more out of every ship they manage to capture: top ransoms trebled from $3 million to $9 million between 2008 and 2010. One solution could be to give Somalis something better to do on shore. To target that assistance, though, we have to know who profits from piracy and who does not. With no effective government and no government statistics in Somalia, that's hard to find out. Anja Shortland of Brunel University in London thinks she has a solution. In a report for the international affairs think tank Chatham House in London, she reports that two major inland towns in Puntland, the pirates' home region, have started lighting up more at night. So what is the latest on Somalian Piracy? 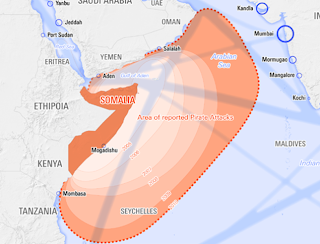 In the world's poorest places, the movements and prosperity of people can be traced by the appearance of electric lights, which is recorded by US weather satellites. Such images have been used to track population clusters in West Africa that are likely to harbor measles outbreaks. Shortland averaged a year of light readings from Puntland to exclude transitory lights such as campfires. She found that night-time glow of the pirate home towns of Garoowe and Boosaaso has been climbing since 2008– even as piracy took off and higher food prices forced other towns in the region to cut their electricity bills. Meanwhile, local prices for food and cattle reveal increased spending locally, coinciding with pirate activity in the Arabian Sea. All this suggests Garoowe and Boosaaso are doing quite well. As recently as yesterday, Spanish warship ESPS Patino had just completed escorting a ship carrying food aid into the Somali capital of Mogadishu. In addition to a counter-piracy effort, the EU’s main mission is to escort freighters carrying food from the World Food Program. That’s when a skiff carrying six pirates sped towards the warship and the pirates began to fire their light-caliber weapons at the ship in an attempt to board it. The Patino’s crew immediately began to fire back in self-defense and launched the ship’s helicopter. Five of the pirates were injured and two required medical treatment on board the Patino. The crew of the Spanish warship is also looking into the pirates’ claim that another pirate was lost overboard during the attack. EU counter-piracy forces, which began their mission in December 2008, hadn’t used weapons against pirates until yesterday, according to naval force spokesman Harrie Harrison. The last known incident of gunfire involved the U.S. Navy and took place “a few years ago,” Harrison said, speaking by phone from Northwood, England. Between 1,500 and 3,000 pirates operate in the waters, navigated by 28,000 vessels carrying 40 percent of world trade, according to the report. Pirates secured $135 million in ransom payments in 2011 to release hijacked ships, it showed. Piracy is rife off the coast of Somalia, and ships are regularly hijacked in defiance of the international naval force that patrols the Indian Ocean. Figures released last month by the European Naval Force showed that more than 2,300 crew members had been taken hostage in the area since December 2008, with some 200 still thought to be in captivity. Lawmakers said that British authorities have been disappointingly slow to take action on financial flows relating to ransom payments, claiming that little is known about those profiting from piracy. Prime Minister David Cameron will host an international conference in London next month aimed at helping Somalia tackle piracy, militancy and its humanitarian crisis. Piracy is a serious problem in the Gulf of Aden and the Indian Ocean. While NATO, Russian, Iranian, and Chinese ships all escort merchant vessels through the Gulf of Aden, foreign militaries can't be everywhere at once. Ships traveling through dangerous waters often need to create their own improvised anti-pirate defenses ... and the market for these products is booming. A variety of arms contractors and boutique manufacturers are producing everything from “stinky water” walls to high-powered water cannons to deter murderous Somali pirates. Fast Company reported previously on the growing use of advanced technology by Somali pirates. Because pirates have begun using more sophisticated methods to trap shipping vessels — it's not unknown for savvy maritime criminals to track sea traffic via Internet postings — protective measures have changed. However, according to one expert, the best security is the old-fashioned kind. Jay Bahadur, author of "The Pirates of Somalia," believes that armed guards are the most important anti-pirate defense. Additional anti-pirate security devices are expected to be unveiled at the 2012 Transport Security Expo, which will be held in London this coming November. Green Badge Solutions, LLC provides maritime security for commercial vessels in the Gulf of Aden. We have multiple teams available for deployment. Do not let your vessels fall into the wrong hands. If your ship travels within the the area highlighted on the above map, you will be hijacked! Please go to our website www.greenbadgesolutionsllc.com for more information on how to contact us.