I normally do not talk about military actions taken to save lives throughout the world; therefore, my readers did not see any article about the Bin Laden operation. Yet, sometimes, some operations are so well covered in the news media, that talking about the great actions performed by SEAL Team 6, is a must. An interesting article in the New York Times mentioned that American commandos raced into Somalia early Wednesday and rescued two aid workers, an American woman and a Danish man, after a shootout with Somali pirates who had been holding them captive for months. The American soldiers swooped in by helicopter, killed nine pirates and captured several others, before spiriting away the hostages, who were not harmed, Western officials said. Somalia is considered one of the most dangerous places in the world, plagued by pirate gangs and countless militant groups, a lawless nation that has languished for 21 years without a functioning government. Several Westerners have recently been kidnapped, typically for ransom, and it seems that as Somalia’s pirates have a harder time hijacking ships on the high seas because of the beefed up naval efforts, they are increasingly turning to snatching foreigners on land. In this case, though, senior Pentagon officials said the kidnappers appeared to have no direct links to any of the pirate bands that have attacked shipping lanes off Somalia. They appeared to be a criminal gang, with no ties to local terrorist organizations or other ideological militant bands. Want to know more? 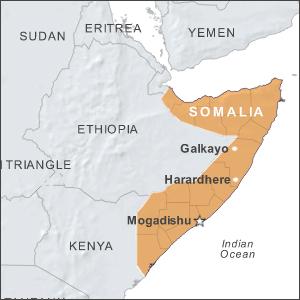 Oct. 25, Ms. Buchanan and Poul Hagen Thisted, the Danish aid worker, were kidnapped by two truckloads of gunmen as they headed to the airport in Galkayo, a central Somalia town on the edge of pirate territory (see map on right). The two were working for the Danish Demining Group, one of the few Western organizations that was still operating in that area. Somali officials immediately suspected that a local employee had tipped off the gunmen, and it soon emerged that the men holding the aid workers were part of a well-established pirate gang. Negotiations with pirates can drag on for months. One British couple sailing around the world on a small sailboat was kidnapped by pirates from this same patch of central Somalia and then held in captivity in punishing conditions for more than a year.
Somalia’s Transitional Federal Government, the internationally recognized but relatively impotent authority based in the capital, Mogadishu, has little influence over the pirates. Neither do the traditional, clan-based militias that still operate in these areas but cannot afford the weaponry or manpower now fielded by well-financed pirate gangs. Somalia is also considered a no-go zone for conventional American military operations, but it has been the site of several special operations raids, usually to kill wanted terrorism suspects. American forces stage the raids from a constellation of bases ringing Somalia, in Ethiopia, Djibouti and Kenya.
Buchanan and Thisted worked for the Danish Demining Group, a unit of the Danish Refugee Council that helps clear landmines and other explosives in conflict zones in Africa and the Middle East. They were kidnapped in October in the central Somali city of Galkayo.
According to local leaders in Galkayo, dark helicopters began circling over the area late Tuesday night. Sometime around 3 a.m., the American commandos landed near a small village called Hiimo Gaabo, south of Galkayo and a firefight erupted. The commandos freed the hostages, and the helicopters took off. By dawn, after morning prayers, the bodies of the nine pirates killed in the raid were brought back to Hiimo Gaabo. Panetta visited U.S. troops in Djibouti last month on his way to Afghanistan and Iraq, in a stopover that reflected Obama's growing focus on the militant and piracy threats from Yemen and the eastern edge of Africa. (In Djibouti, the United States has a platform to monitor al Qaeda in the Arabian Peninsula (AQAP) in Yemen and Somalia's al Shabaab, a hard-line rebel group with links to al Qaeda.) U.S. Defense Secretary Leon Panetta confirmed no American soldiers were killed in the operation.
According to the local leaders, three to six pirates were captured.  One American official said an assault team of Special Operations troops parachuted in from fixed wing aircraft, not helicopters, under cloak of darkness to a landing area about a mile’s walk from the actual target. The paratroopers landed, then walked to an encampment where the kidnappers where holding the two hostages. Within minutes, shots rang out. The hostages were located and secured. Nine Somalis were killed and an unknown number wounded in the ensuing firefight with the commandos. No Somali prisoners were taken, the official said. American helicopters then landed nearby and whisked the commandos and the two former hostages out of the area, and flew them back to Camp Lemonier in Djibouti.
The raiders came in quickly, catching the guards as they were sleeping after having chewed the narcotic leaf qat for much of the evening, a pirate who gave his name as Bile Hussein told the Associated Press by phone. Hussein said he was not present at the site but had spoken with other pirates who were, and that they told him nine pirates had been killed in the raid and three were "taken away." (They flew in from Djibouti, on Africa’s Red Sea coast where there is a large US military base, to Galkayo, the largest town in Somalia close to the pirates’ strongholds.)
A pirate from the Somali town of Adado, near where the rescue took place, told The Los Angeles Times in a phone interview that pirates would be sure to keep U.S. hostages better secured in the future. Western diplomats and aid workers have been using Galkayo as a base or entry point into Somalia, with diplomatic activity on the rise since the radical Islamic rebel group Al Shabab abandoned Mogadishu and retreated to its southern stronghold.
Obama’s warning that abductions of Americans abroad “would not be tolerated” sent a strong signal of future missions targeting Somali pirates should they seize more US citizens.