The Future Leader of Pakistan!

An interesting op-ed piece mentioned that an exciting shift is now underway in Pakistan: the young are becoming politically engaged. In coffee shops, beauty salons and workplaces, instead of gossiping or deconstructing the latest televised drama, youngsters are arguing about the merits of various politicians. Unlike their counterparts in the Arab world, young Pakistanis are less inspired by revolutionary rhetoric than in producing results through the existing system. They are demanding issue-based politics and sound government policies to reduce corruption, create jobs and recalibrate U.S.-Pakistani relations. Blogging in the Express Tribune, Muhammad Bilal Lakhani describes the evolution, “A visible and growing number of young, educated professionals in Pakistan are channeling their energies to incrementally improve the system by engaging with the current set up." So what is going on in Pakistan politically lately? 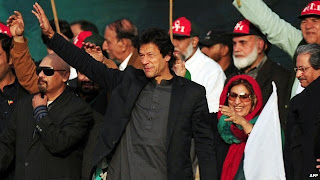 Pakistani youngsters’ desire for change and a greater stake in their country’s future has fueled the unexpected success of the cricketer-turned-politician Imran Khan (see picture on right). He boasts more than 150,000 followers on Twitter and more than 330,000 Facebook likes. The student wing of his Pakistan Tehrik-e-Insaf (P.T.I.) party counts over 4,000 members in Karachi. A P.T.I. rally in Lahore in October attracted more than 7,000 students and thousands of young voters; with so many fresh faces in the crowd, the line between political gathering and rock concert seemed blurred. And this energy goes beyond P.T.I. supporters. Several social media sites have hosted online voter-registration drives for the 2013 general elections. Many of these are not affiliated with any political party; they are simply seeking to boost youth participation at the polls. Pakistan’s mainstream political parties, the Pakistan Peoples Party (P.P.P.) and the Pakistan Muslim League-N (P.M.L.N.), are launching youth-oriented campaigns and showcasing a new generation of politicians. Prime Minister Yousaf Raza Gilani, of the P.P.P., is encouraging private media outlets to emphasize youth-oriented programming. The opposition leader Nawaz Sharif, who heads the P.M.L.N., recently drafted a new strategy to revamp his party’s Facebook presence and, in a bid to entice young voters, promised to distribute 300,000 laptops to students if he is elected. The heightened political engagement of Pakistan’s youth is especially significant these days as judicial activism and military interference in the political arena threaten the country’s democratic foundations. Imran Khan's sudden explosion on Pakistan's political horizon seems to have shaken the country's mainstream parties, with erstwhile foes PML-N and PPP proposing a summit, apparently to counter the threat from cricketer-turned-politician. Khan's Pakistan Tehrik-e-Insaf party has created a stir by holding a string of rallies across the nation in recent weeks, drawing massive crowds. His meetings in Nawaz Sharif's citadel Lahore and PPP stronghold of Karachi drew unprecedented response, triggering political ripples. Of late, the top leadership of the PPP has severely criticized Sharif for filing a petition in the Supreme Court seeking an inquiry into the allege memo that sought US help to stave off a military takeover in Pakistan. Both the PPP and PML-N believe that Khan and his party have the backing of the security establishment and would be the ultimate beneficiary in upcoming elections if they continue fighting each other. In December, a rally in Karachi organized by  Imran Khan drew a massive crowd of supporters, bolstering his image as a potent force in Pakistan's turbulent political landscape. Pakistani news reports estimated that as many as 100,000 supporters crammed into a field next to the iconic white marble mausoleum of Mohammed Ali Jinnah, the founder of Pakistan, on the anniversary of Jinnah's birthday. Looking out on a sea of red and green flags for Khan's Tehreek-e-Insaf party, Khan told backers that, if his party came to power, he would ensure that the rule of law was applied evenly and would work to eradicate the taint of corruption found at every layer of Pakistani society. Once regarded as a fringe player in Pakistani politics, Khan is building formidable momentum at a time when the country's ruling Pakistan People's Party, led by President Asif Ali Zardari, is struggling for survival amid rumors that the powerful military could engineer an overthrow of the government. He has attracted key figures from the country's major political parties. The most notable defector is former Foreign Minister Shah Mehmood Qureshi, once a PPP stalwart. On Friday, Javed Hashmi, a top figure in opposition leader Nawaz Sharif's PML-N party, also said he was joining Khan's party. In recent weeks, however, the skeptics have been almost silent. Khan, now 59, appears on the edge of a political breakthrough. After years in the semi-wilderness, Khan – or "Imran" as he is known in Pakistan – is walking through green fields of mainstream popularity. The former cricketer tops opinion polls. For the first time, powerful and established political figures have begun defecting to his party. Imran Khan was born on 25 November 1952 into a wealthy and well-connected Lahore family. Ethnically, he is a Pashtun, or Pathan, as British imperialists called the peoples concentrated along what once was known as the North-West Frontier. Educated at Lahore's Aitchison College, the most exclusive school in Pakistan, and the Royal Grammar School in Worcester, before going to Oxford University, his early years were typical of Pakistan's anglicized upper classes. A precocious sporting talent meant that, in 1971, the shy teenager made his test debut against England. By 1982, he was captain of Pakistan's national side. Imran's first autobiography, All Round View (1992), recounts his extraordinary sporting career: the victories against the odds in front of the home crowd, the career-threatening injury overcome, the return from retirement to lead his national team once more to glory, the eventual – and lasting – reputation as one of the best all-round cricketers ever. His many critics, particularly among the country's liberal elite, see him as a stooge for a quasi-Islamist army and a dangerous reactionary. An editorial in The Nation – a newspaper close to the military – compared him with Zulfikar Ali Bhutto, a consummate populist politician who was president and prime minister in the 1970s before being executed in 1979. The comparison is contrived but that it can even be made is remarkable. "Believe in Pakistan," he still tells the crowds. This is something that tens of millions of people are desperate to do. "Who will save Pakistan?" they chant, as before. "Imran Khan, Imran Khan." Let us see how well he does in 2012.