An interesting article mentioned that A band of al-Qaida militants seized full control of a town 100 miles south of the Yemeni capital Sanaa on Monday, overrunning army positions, storming the local prison and freeing at least 150 inmates, security officials said. The capture of Radda expanded already significant territorial conquests by the militants, who have taken advantage of the weak central government and political turmoil roiling the nation for the past year during an uprising inspired by Arab Spring revolts. Authoritarian President Ali Abdullah Saleh recently agreed to step down, but he remains a powerful force within the country and a spark for ongoing unrest. So, what more information is there about this? 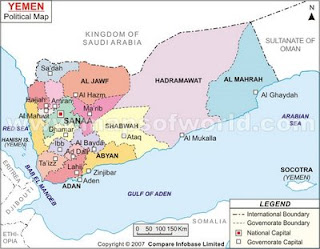 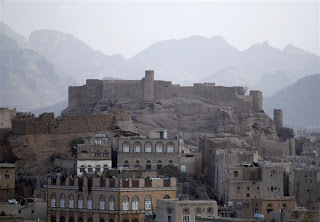 The group had previously taken control of a string of towns in the mostly lawless south. But its capture of Radda is particularly important because it gives the militants a territorial foothold closer than ever before to the capital, where many sleeper cells of the terror network are thought to be located. The historical Radda castle (see picture on right), was one of the places overtaken Sunday. An Associated Press photographer who visited Radda on Sunday said the militants were armed with rocket-propelled grenades, automatic rifles and other weapons. He quoted residents as saying the black al-Qaida banner has been raised atop the mosque they captured over the weekend. According to security officials, a band of about 200 militants pushed into Radda on Monday from several points they had captured over the weekend, including an ancient castle that overlooks the town, a school and a mosque. They stormed the local jail and freed 150-200 inmates, including an unspecified number of militants loyal to al-Qaida. Some of the freed inmates joined the militants after they were given arms, according to the officials who spoke on condition of anonymity because they were not authorized to speak with the media. In midday, clashes erupted between al-Qaida militants and armed tribesmen, leaving one dead and two wounded, according to a member of al-Qayfa tribe which took part in the clashes. Radda is part of Bayda province, a key transit route between the capital and Yemen's southern provinces where al-Qaida-linked militants have already seized control of a swath of territory and towns in Abyan province. Yemeni security forces have been trying unsuccessfully to push them out since then in fierce fighting that has caused many casualties on both sides. The conflict has forced tens of thousands of civilians from Zinjibar and the surrounding area to flee, many to the port city of Aden. "Al-Qaida has raised its flag over the citadel," one resident told Reuters by telephone. "Its members have spread out across the town's neighborhoods after pledging allegiance to Ayman al-Zawahri during evening prayers (on Sunday)." According to Teiri, local tribesmen decided to join forces and help protect the city from an Al-Qaida invasion, "but they showed up in such force it became clear that in this town at least, they were stronger than the state," he said. The takeover of Rada, located in Yemen's al-Bayda province, was accompanied by what appears to be the formal appointment of a local "emir," or prince, to govern the newly seized territory, a posting given to the brother-in-law of slain US-born cleric Anwar al-Awlaqi. Anwar al-Awlaqi, the first US citizen to be put on a US list of militants targeted for assassination, was killed on September 30 in a suspected US drone strike in Yemen. He was believed to be the leader of overseas operations for Al-Qaida in the Arabian Peninsula (AQAP), the group's deadliest global branch. News of Al-Qaida's victory quickly spread through Bayda province, prompting thousands from the provincial capital - also named Bayda - to march in anti-government protests, demanding the provincial governor's resignation and the ouster of the region's security chiefs. Let us see how the Yemen government hopes to win this town back.