An interesting article mentioned that the arrest of a 29-year-old Moroccan living illegally in the United States has focused attention again on the danger posed by "lone-wolf" terrorists. Amine El Khalifi has been charged with plotting to carry out a bombing on the U.S. Capitol and attempting to use a weapon of mass destruction against federal property. Would you like to know more? 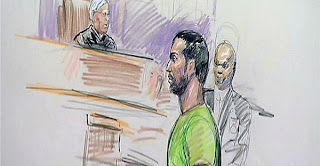 He is alleged to have worked with others he believed to be al Qaeda operatives, who provided him with a suicide vest and conducted a demonstration of explosives in a quarry in West Virginia, according to a Department of Justice affidavit. For more than a year, undercover agents were in contact with El Khalifi after his intentions became known during an ongoing criminal investigation, according to one source. According to the affidavit, an FBI informant brought El Khalifi, who was arrested Friday, to the attention of law enforcement in January 2011 after he told others at an Arlington residence that "the group needed to be ready for war."

The FBI said it conducted the undercover operation as part of a longstanding terrorism probe of the suspect, who was arrested blocks from the Capitol building as he planned to detonate what he believed to be live explosives in a vest he wore. Both the explosives and a MAC-10 automatic gun were given to him by undercover federal agents, who had first rendered them inoperable, according to court documents.

"El Khalifi allegedly believed he was working with Al-Qaeda and devised the plot, the targets and the methods on his own," the statement said. According to court documents, Khalifi attended a meeting in Arlington, Virginia, in January 2011 which included a "confidential human source" who reported to the FBI that Khalifi wanted to join an effort to stage attacks on US soil.

He spent nearly a month scoping out the building, venturing inside several times to conduct surveillance and asking a man he thought was an Al-Qaeda operative -- but who was in fact a US undercover agent -- to remotely detonate the bomb if he encountered problems with security officers.

The Justice Department said undercover agents were with Khalifi on Friday when they drove to a parking garage, where the suspect took possession of an automatic MAC-10 pistol "and put on a vest containing what he believed to be a functioning bomb."

Khalifi made an initial appearance Friday before a federal judge, where he was charged with attempting to use a weapon of mass destruction against US property. He faces a maximum penalty of life in prison if convicted. Authorities briefed US lawmakers -- who gather in the Capitol building to debate and vote on legislation -- on the arrest.

Authorities have released only basic biographical details about El Khalifi and haven’t described how they believe he became intent on destruction. He was born in Morocco and came to the United States in 1999, when he was 16 years old, overstaying his visitor visa and remaining in the country illegally, court papers say. He is unemployed and is not believed to be associated with Al-Qaeda.

The investigation that led to El Khalifi’s arrest started last January on a confidential informant’s tip to the FBI. The informant described a meeting inside an Arlington apartment, where a person who produced an AK-47, two revolvers and ammunition said he equated the war on terror with a “war on Muslims” and urged the group to prepare for battle. El Khalifi, the FBI learned, expressed agreement.
By December, authorities say the sting operation and El Khalifi’s own plans were taking shape.

That month, he traveled to Baltimore with a man he knew as Hussien to meet a person who was introduced to him as an Al-Qaeda associate, authorities say. He told the man, Yusuf, that he planned
to blow up a building just outside Washington in Alexandria, Virginia, that contained military offices.

Handling the man’s AK-47, he spoke of wanting to “use a gun and kill people face to face,” according to the complaint.

Unbeknownst to El Khalifi, the man who called himself Yusuf was an undercover law enforcement officer. Hussien was an operative working undercover with investigators.

El Khalifi spoke in December of wanting to attack a synagogue and Army generals. But within days, he was settling on a new plan to bomb a Washington restaurant at lunchtime after a waiter told him that was the busiest time, the affidavit says.

Court papers show the last two weeks were consumed with the planned attack on the Capitol. El Khalifi selected a location to be dropped off. He asked that even more explosives be strapped to his body. He wanted to ensure the bomb in his vest could be remotely detonated in case he faced security problems, authorities say.

The final planning happened in an Alexandria hotel room on Feb. 14, when authorities say “Yusuf” handed El Khalifi an automatic machine gun and showed him a jacket the suspect thought contained a bomb, the affidavit says. El Khalifi studied himself in the mirror with the weapon. He practiced shooting it. He discussed how he would be identified in a video Al-Qaeda would release after the attack.

El Khalifi got into a van in northern Virginia with Yusuf and Hussien. The gun and vest he had asked for were inside. The van pulled into a parking garage near the Capitol. El Khalifi got out alone in preparation, investigators say, to carry out his plot.
Before he could leave the garage, he was arrested.

Great job on the part of the FBI!!