An interesting article mentioned that Iranian President Mahmoud Ahmadinejad stated on February 11th, that Iran will soon announce "very important" nuclear achievements. Speaking at a rally in Tehran to mark the 33rd anniversary of the Islamic revolution, Ahmadinejad also said Iran would never give up its uranium enrichment program. "In the coming days the world will witness Iran's announcement of its very important and very major nuclear achievements," Ahmadinejad told a crowd at Tehran's Azadi [Freedom] Square broadcast on state television. Would you like to know more? 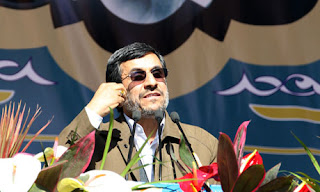 The Islamic republic has said it is forced to manufacture nuclear fuel rods, which provide fuel for reactors, on its own since international sanctions ban it from buying them on foreign markets.

The US and its allies suspect Iran is trying to develop nuclear weapons, while Iran insists its program has only peaceful purposes. The United States and Israel, a country which Iran does not recognize, have not ruled out military action if sanctions fail. Iran has warned of a "painful" answer, saying it would hit Israel and U.S. bases in the Gulf as well as block the vital Gulf oil shipping route through the Strait of Hormuz. If attacked by the Zionist regime (Israel), we will turn it to dust," said a Revolutionary Guards commander, Mohammad Shirdel, semi-official Fars news agency reported Saturday. "Thousands of our missiles will target Israel and the 40 bases of America in the region," he added.

The nuclear dispute has fuelled tension as the West tightens sanctions. The European Union has agreed to ban Iranian oil imports by July and to freeze the assets of Iran's central bank.
Industry analysts say sanctions are hitting Iran's vital oil sector and say falls in crude output and exports will speed up. Global oil flows are realigning even though the EU ban on imports from Iran only takes effect in July, the International Energy Agency said in its monthly Oil Market Report Friday. Asia's two giants, China and India, want to head off new sanctions on Iran. China, Iran's biggest trade partner, is one of six major powers involved in nuclear talks with Tehran. Ahmadinejad, echoing Iran's official stance, said fresh nuclear talks would be welcome. The last round collapsed a year ago over Iran's refusal to halt its uranium enrichment work.

Iran's economy is around 60 percent reliant on oil. The country is heavily dependent on food imports, buying 45 percent of its rice and most of its animal feed abroad. Turkish Foreign Minister Ahmet Davutoglu, who was recently in Tehran, says Iran is ready to return to negotiations on its nuclear program – but he offers no assurances that Iran is prepared to meet the West’s demand that Iran verifiably suspend its uranium enrichment activities to secure a restart of talks. Davutoglu is in Washington to meet with administrative officials and Congressional leaders on two pressing issues – Iran and Syria. Turkey’s remarkable rise as a regional leader over the year of the Arab Spring will color discussions as the foreign minister meets Monday with Secretary of State Hillary Rodham Clinton, White House national security adviser Thomas Donilon, and Secretary of Defense Leon Panetta.

Yet at the same time he says Iran’s progress in enrichment means that past proposals for defusing the Iranian nuclear crisis with nuclear fuel swap deals – including one from Turkey and Brazil in 2010—are now outdated. But the earlier proposals could still serve as a “frame of reference” for a new deal, he adds. Davutoglu’s comments on the Iranian crisis come as diplomatic circles debate whether the terms for talks on Iran’s nuclear program can be agreed soon. There is concern that Israel could decide that Iran’s progress is nearing a point where the program would be invulnerable to attack. It might then launch an airstrike on Iran’s nuclear sites.