How Israel will Attack Iran!


An interesting article mentioned that an Israeli attack on Iran would be complex operation. If Israel attacked Iran's nuclear facilities, the strike would probably take the form of a complex air assault involving scores of planes that would have to penetrate Iranian air defenses and attack up to a couple of dozen targets simultaneously. "This would be way more sophisticated than anything that's ever been done before," said Charles Wald, a retired Air Force general who led the coalition air campaign in Afghanistan that helped topple the Taliban. Would you like to know more? 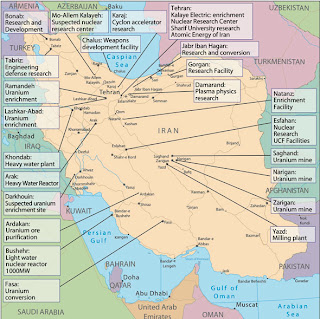 By contrast, Israel's strike on Iraq's Osiraq nuclear reactor in 1981 and an attack in Syria in 2007 were simpler operations that required Israel to hit a single above-ground target. Neither country had sophisticated air defense capabilities. Iranians have learned from Israeli attacks in Syria and Iraq, Wald said. Iran's nuclear facilities are dispersed throughout the country, some of which are being hardened to withstand bomb blasts, said Colin Kahl, a Georgetown professor and former Pentagon official overseeing Middle East policy. Pilots would face a network of radar and anti-aircraft missiles designed to protect Iran's airspace.

Israeli pilots would be near or exceed the maximum range of their U.S.-built F-15s and F-16s, depending on the route they took and their speed and payload. Wald said the Israelis would either have to use aerial refueling or land somewhere en route to refuel. It's not known whether any country would provide permission or whether Israel could set up a covert refueling facility in the desert. Aerial refueling has its own set of challenges. Israel's air force has limited refueling capacity, and if it launched any of its four KC-130 tankers, it would have to commit fighter planes to protect them, putting a further strain on resources, said Scott Johnson, an analyst at IHS Jane's, a defense consulting firm. Israel has about 350 F-15s and F-16s. Flying over Iraq is the most direct route for Israeli pilots. Since the U.S. withdrawal, Iraq is not capable of effectively protecting its airspace, which potentially would give Israel a way to reach Iran while maintaining an element of surprise.

Israeli aircraft could probably penetrate Iranian air defenses, but Israel would need to commit additional aircraft to jam radars and in other ways neutralize Iran's radar and missile systems, analysts say. Iran doesn't have the latest systems, said Wald, a military analyst at the Bipartisan Policy Center, a think tank. In 2010, Russia canceled a planned sale to Iran of sophisticated S-300 surface-to-air missiles that would have significantly upgraded Iran's anti-aircraft defenses. Israel has large bombs capable of penetrating bunkers, but some analysts say they need more sophisticated munitions to help knock out some of the well-protected facilities. Israel has the U.S.-built GBU-28 bunker busters, 5,000-pound bombs capable of blasting hardened targets. In a recent report, the Bipartisan Policy Center advocated the United States provide Israel with the more sophisticated GBU-31.

The United States should be prepared for an Iranian counterstrike, Wald said. Iran has medium-range missiles that could reach Israel, Kahl said. There are other ways Iran could strike back. Iran's navy could interfere with commercial shipping in the narrow Strait of Hormuz, disrupting the world's oil supplies. In 2009, about 17% of all oil traded worldwide went through the narrow strait, according to the Energy Department. At the very least, the flow of oil from the Persian Gulf would be dramatically slowed if not completely cut off. Ships would have to be painstakingly convoyed behind minesweepers. Tanker insurance rates would soar, particularly if any of the huge vessels were sunk or badly damaged. Oil prices would be likely to spike vertiginously and cripple global economic growth.

To get a more dispassionate read on the Iran situation, Barrons telephoned George Friedman of the private-intelligence Website Stratfor, who has been engaging in a war of his own against hackers who last December trashed Stratfor, stealing millions of internal e-mails and subscriber information and ruining its servers. To Friedman, the likelihood of an imminent Israeli strike on Iran's nuclear facilities remains low probability ("a one-in-four chance," he opined). For one thing, to be successful the action would require U.S. assistance. And that aid is unlikely to be forthcoming, especially in an election year. Such an attack would involve Israeli air sorties of over 1,000 miles, coordinated with missile attacks from Israeli submarines. Ship-launched missiles can't carry payloads of bunker-busting bombs necessary for much of the task. But it's the aftermath of any air attacks on Iran that Friedman finds more problematic. Civilian casualties in Israel by likely rocket and missile attacks from Hezbollah and Hamas in Gaza could be higher than anticipated. There will be no lightning victory achieved such as during 1967's Six-Day War. Meanwhile, Iran will survive as the Middle East nation with the largest conventional military force and a population fired by patriotic fervor.
Friedman believes the hysteria over Iran's apparent quest to become a nuclear power has clouded rational consideration of more important geopolitical issues. Even if Iran succeeds in building some kind of nuclear arsenal, which in Friedman's view is at least three years off, the Islamic Republic faces immediate annihilation if any of the weapons are ever used.

Russia’s top military boss says an attack against Iran, which the west suspects of developing nuclear weapons, could begin as early as summer. The Russian General Staff is closely watching the situation, and is not ruling out the possibility of a coordinated attack on the Islamic Republic, General Nikolai Makarov, head of the Russian General Staff, told reporters on Tuesday. In the slide towards escalating violence, there have been a string of disturbing incidents, including alleged cyber attacks against Iran, as well as the downing of a sophisticated US drone, which Iran says it guided to the ground after electronically hacking into the vehicle. This game of tit-for-tat can readily explode into all-out conflict, which would be a worst-case scenario not just for the region, but for the entire world.

Washington Post columnist David Ignatius wrote earlier this month that Panetta "believes there is a strong likelihood that Israel will strike Iran in April, May or June before Iran enters what Israelis described as a 'zone of immunity' to commence building a nuclear bomb." Russia is adamantly opposed to any military action against Iran, though Moscow has supported UN Security Council sanctions against Tehran in an effort to force the Islamic Republic to cooperate with the International Atomic Energy Agency (IAEA).

While affirming that all options are on the table, the Obama Administration has repeatedly stated that diplomacy built around a global coalition is the “preferred solution” to ending Iran’s pursuit of nuclear weapons. But this isn’t saying much. President Obama has given no indication of how the United States would respond if Israel were to take a preventative strike against Iran or how the U.S. is preparing for such an eventuality. Furthermore, President Obama denies evidence that Iran has “intentions or capabilities” to attack the U.S. homeland in retaliation for a strike.

However, just last month, Director of National Intelligence James Clapper warned that it is increasingly likely that Iran could carry out attacks in the U.S. or against U.S. targets. While Iran is feeling the effects of recent international sanctions, economic difficulties are not likely to jeopardize the regime. The plot to murder the Saudi ambassador in Washington last year was one of Iran’s boldest moves to date in committing an attack on U.S. soil. According to Clapper, this: "shows that some Iranian officials—probably including Supreme Leader Ali Khamenei—have changed their calculus and are now more willing to conduct an attack in the United States in response to real or perceived U.S. actions that threaten the regime."

The Obama Administration should develop a proactive strategy that addresses the escalating conflict by including policies that mitigate threats posed by Iran to U.S. national security—as well as a coordinated response in the event that Israel attacks Iran. In doing so, the Obama Administration should stand shoulder to shoulder with Israel, recognizing Tel Aviv’s right to defend itself against a regime hell-bent on “erasing [Israel] from the page of history.”