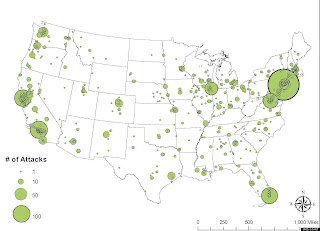 An interesting article spoke about researchers at the University of Maryland (UMD) and the University of Massachusetts, Boston (UMB) who have created a detailed map of where terrorism attacks have occurred since 1970 - and it reveals some big surprises. The map's accompanying study, conducted at the UMD's National Consortium for the Study of Terrorism and Responses to Terrorism (START), found that while certain areas (those surrounding Manhattan and Los Angeles, for example) have endured as terror 'hot spots' throughout the study, others have come and go. In the 2000s, for example, there has been a higher-than-average rate of attacks in Maricopa County, AZ, Phoenix's county. King County, WA, on the other hand, was a terror hot spot in the 1970s and 1980s, but has been largely quiet since. Want to know more?

The study, which looked at all 3,143 U.S. counties, also found that terrorism hot spots and
motivations have changed dramatically from decade to decade. Where do terrorists come from? In the last decade, many politicians have conjured the image of Islamic fundamentalists from the Middle East. But in the 1970s, many attacks classified as 'terrorist' came from left-wing groups in Berkeley, San Francisco and surrounding areas. The research showed a strong association between the county in which a terrorist attack occurred and its motivation. "For example," a University of Maryland statement notes, "Lubbock County, Texas, only experienced extreme right-wing terrorism while the Bronx, New York, only experienced extreme left-wing terrorism." "The 1970s were dominated by extreme left-wing terrorist attacks," co-author Bianca Bersani, assistant professor of sociology at UMB, said. "Far left-wing terrorism in the U.S. is almost entirely limited to the 1970s with few events in the 1980s and virtually no events after that." Perhaps unsurprisingly, domestic left-wing terrorism overwhelmingly took place in the San Francisco Bay area during the Vietnam War. Other interesting findings include the fact that "religiously motivated attacks occurred predominantly in the 1980s, extreme right-wing terrorism was concentrated in the 1990s and single issue attacks ['e.g., anti-abortion, anti-Catholic, anti-nuclear, anti-Castro'] were dispersed across the 1980s, 1990s and 2000s." The researchers hope that the insights from the study can be used to determine the relationship between terrorism and ordinary crime, which has historically been much easier to predict. According to the study, "Like ordinary crime, terrorism hot spots are predominately located in large, metropolitan areas. While some locales remain targets of terrorist attacks, to a large extent hot spots of terrorist attacks demonstrate a significant amount of variability over time. Moreover, we find significant variability in the ideologies motivating terrorist attacks across decades. Similarly, Johnson and Braithwaite (2009) examined the presence of chains of IED and non-IED attacks in Iraq among insurgents and found evidence that both were highly concentrated in geographical space. A study by LaFree et al. (2011) on attack patterns in Spain by the terrorist organization ETA found that attacks were heavily concentrated in the four main Spanish provinces claimed as a homeland by the organization, and about forty percent of all attacks in a given province were immediately followed by another attack in the same province. This heavy concentration of terrorist attacks by ETA is confirmed in research by Behlendorf, LaFree, and Legault (forthcoming), which found very high geographic concentrations for attacks not only by ETA in Spain, but also by the FMLN in El Salvador. Overall, we assume that the structure of potential targets and victims of terrorist attacks are not randomly distributed throughout space, suggesting that terrorist acts will likewise be non-random (Siebeneck et al., 2009). Concurrently, terrorist operations are resource-dependent, and efforts to extract the largest return on investment suggest that groups will normally seek to minimize the distance traveled between events (Clarke and Newman, 2006). We would expect that these distances will be close enough to maximize efficiency without increasing the risk of capture (Townsley, Johnson, and Ratcliffe, 2008). Certain locations may also provide unique targets for terrorist attacks, due to their population concentration, political value, or symbolic resonance (Savitch, 2007). Moreover, terrorist organizations must rely on specific locations to provide physical resources and safe havens from state authorities. These “defended spaces” (Suttles, 1972) may supply critical support from sympathizers and may share the same ethnic or linguistic association as the specific terrorist group. The concentration of potential targets combined with the resource maximization of terrorist organizations leads us to predict that terrorist attacks in the United States during the past four decades will also be spatially clustered."