An interesting article mentioned that the nation's top intelligence adviser told Congress on Thursday that Al Qaeda "is extending its reach into Syria" -- possibly with Iran's help. In a rare public admission, Director of National Intelligence James Clapper said Al Qaeda and the Iranian regime have a "shotgun marriage, or marriage of convenience." More significantly, given the series of attacks this week linked to Iran, Clapper said Tehran appears to see Al Qaeda as an insurance policy -- a "surrogate or proxy" -- against future Western aggression. Would you like to know more? 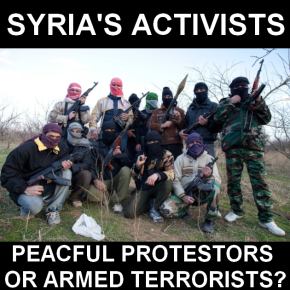 This public confirmation comes as U.S. officials investigate the release of five Al Qaeda members after "years of house arrest" in Iran. The men include Saif al-Adel, who was tipped as the likely replacement for Osama bin Laden. The release of Al Qaeda leaders is not confined to Iran. U.S. officials are also investigating whether the Syrians released Abu Musab al-Suri, seen as one of the terror network's most important strategists. Al-Suri was captured in Pakistan 2005 and was in CIA custody until he was sent back to Syria as part of the controversial rendition program. Until recently, US officials were confident he would not be released by the Syrian government.

Clapper also confirmed that U.S. officials believe an Al Qaeda affiliate was responsible for a series of blast in Syria because the car bombs "bore the earmarks" of Al Qaeda in Iraq. The affiliate, written off by some members of the U.S. intelligence community, has made a comeback according to Clapper.

Since December there have been Bombings in Damascus and Aleppo that "had all the earmarks of an Al-Qaeda like attack,” Director of National Intelligence James Clapper told the Senate Armed Services Committee on Thursday. Clapper said the lack of a unified opposition group could leave a power vacuum that extremists could fill if the Syrian government falls, a potential development he called "troubling."

The leader of Al-Qaeda has voiced his support for the Syrian uprising. In an eight-minute video posted on Sunday on a jihadist website, Ayman al-Zawahri called on Muslims in Turkey, Iraq, Lebanon and Jordan to aid the Syrian rebels. The anti-Syrian government resolution addressed only one side of the conflict failing to condemn the opposition for their part of the violence as it does condemn the government.

At the Pentagon, Defense Secretary Leon Panetta said the crisis in Syria has become "that much more serious" and worrisome to the United States as a result of indications that al Qaeda has infiltrated the government's opposition.

In New York, meanwhile, the UN General Assembly approved a resolution backing an Arab League plan calling for Assad to step down and strongly condemning human rights violations it said his government had committed. The vote, though not legally binding, reflects widespread world opinion. The comments by Panetta and Clapper in Washington marked a diplomatically dissonant moment of near-agreement between American officials and the Syrian leadership they have called on to step down, after the deaths of thousands of Syrians in the unrest that started during last year's Arab Spring.

Clapper predicted continued stalemate in Syria, with the opposition too disorganized to present a formidable threat on one side, and Iran providing arms and continued support to prop up the government on the other. But he warned Assad's fall would be a boon to extremists. Al Qaeda in Iraq is best positioned to take advantage of that chaos, with its strong family and Sunni religious ties in Syria. The group has long used the country as a transit point to smuggle bombers and bomb-making material over Syria's long desert border with Iraq. During the US war in Iraq, Syrian coordinators were able to smuggle fighters back and forth between the two countries.

Prior to Clapper's remarks, US intelligence officials had been more circumspect, saying the main trunk of al Qaeda was seeking to ally itself with the Syrian rebels as a way to reinvigorate its overall campaign, so under siege is the group from the CIA drone war in Pakistan and the steady drumbeat of special operations raids and air strikes in Afghanistan, Yemen and Somalia.

This news is disturbing, and how extensive al Qaeda's role is...I think that still remains to be seen.