An interesting article mentioned that the three "Bangkok bombers" suspected of attempting to carry out an attack in Bangkok are more likely to be assassins than terrorists, a senior Thai security official has said. This potentially corroborates Israel's claims the three men were thwarted in an Iranian assassination plot similar to earlier attacks on Israeli diplomats in India and Georgia. The official said the nationalities of the suspects had yet to be confirmed. "They have Iranian passports and documents, but we haven't concluded that they are in fact Iranian, which is why we are looking in detail at this case," he said. Would you like to know more? 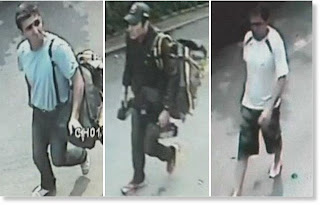 Five people, including the alleged bomber, were injured in three explosions in Bangkok's bustling Ekkamai neighborhood at about 2pm local time. The first explosion occurred at a house rented by three Iranian nationals who, according to police, fled after homemade explosives accidentally ignited. Two men fled while the third, wounded and disorientated from the blast, attempted to hail a taxi before throwing a grenade at the car and another at police. He missed his target and the grenade detonated in front of him, blowing off one leg and requiring the amputation of the other.

A fourth suspect was added to the case late on Wednesday after a court approved warrants for the arrests of four people travelling as Iranian nationals, the Bangkok Post reported. They were the alleged bomber Saeid Moradi, 28, Mohummad Hazaei, 42, Masoud Sedaghat Zadeh, 31, and Rohani Leila, 32, a woman who is said to have arrived in Thailand with the others and rented the house where a cache of explosives was found. Leila's whereabouts are unknown. One of the suspects was detained by Malaysian police in Kuala Lumpur on Wednesday while trying to board a flight to Tehran, the Nation reported. (See CCTV pictures of three suspects on right.)

Further details about the alleged bomber, Saeid Moradi, who lost both legs in the last Bangkok explosion, emerged. He is said to have flown into Thailand on 8 February from South Korea, and spent five nights in the resort town of Pattaya. He checked into the Top Thai hotel with only a backpack, the Bangkok Post reported, and was later joined by a friend who had a large bag with him. The two men hardly left the room, the Post reported. "Mr Moradi was good-looking and dressed neatly, as if he was a young entrepreneur," one member of staff told reporters. "He was also polite and I can't believe that he would be a bomber." The DIY explosives found in a Bangkok house after a series of blasts rocked the capital on Tuesday were similar to devices used against Israeli embassy targets in India and Georgia, Israel's ambassador said on Wednesday, a day after Israel's defense minister accused Iran of being behind the thwarted attack.

Tensions between Iran and its arch-enemy Israel are on the increase over Iran's nuclear research program, which the West fears is designed to produce nuclear weapons, an accusation Iran denies. Israeli Defense Minister Ehud Barak said the attack in Bangkok proved once again that the Islamic state and its proxies continue to "perpetrate terror."

Thai investigators believe they have found a link between this week's bomb blasts in Bangkok and New Delhi. In a third incident, a bomb apparently targeting Israeli embassy staff in the Georgian capital Tbilisi failed to explode. Asked whether the explosives used in India and Thailand were the same, a senior Thai security official said they both had the same "magnetic sheets."

The American, British and Australian embassies in Bangkok told their citizens to be vigilant in light of the explosions but did not advise against travel to the capital. Russia condemned the bomb attacks in India and Georgia and called on both countries to investigate but did not accuse Iran or any other country of involvement. Russia has close ties with Iran and built its first nuclear power plant, which began operating last year, but invariably condemns any attacks it considers terrorism.

India, where similar bombings took place, has good relations with both Iran and Israel, so the attack makes its diplomatic balancing act between the two countries all the more difficult and has thrust the mounting tension between the Middle East rivals on to its doorstep. Israel is the second-largest supplier of arms to India. But India is Iran's biggest oil buyer, relying on it for about 12 percent of its needs, and it is Iran's top supplier of rice. Trade between India and Iran is unlikely to be affected by the bombing in New Delhi, Indian's commerce minister said after a trade association chief said he feared wary exporters would back away from deals with Iran.