Anwar al-Awlaki is dead! Great news, but who will be his replacement?

September 30, 2011
Interesting Article: Anwar al-Aulaqi, U.S.-born cleric linked to al-Qaeda, reported killed in Yemen by SUDARSAN RAGHAVAN / Sana'a published Friday, September 30, 2011
The Yemen Defense Ministry has reported that the terrorist Anwar al-Awlaki (spelt Anwar al-Aulaqi in the article) is dead. The Obama administration in turn, confirmed that he was killed Friday in an Air Strike in northern Yemen. With this substantial hit to the terrorist network, the question comes who will likely replace him? 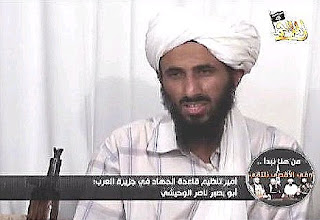 I have spoken in length about Anwar al-Awlaki and his al Qaeda wing in a previous posting-What is al Qaeda in Arabian Peninsula, therefore I will not speak of who he is and what he did. My interest in this entry is to speak about his possible replacement. Well who could potentially replace him in Yemen? One name comes to mind, Nasir Abdel Karim al-Wuhayshi (see picture on right). Nasir Abdel Karim al-Wuhayshi (also known as Naser al-Wahishi or Abu Basir) is the most senior leader of Al-Qaida in the Arabian Peninsula (AQAP) as of today. Nasir comes from a wealthy family in Yemen and once served as bin Laden's personal secretary. He was Bin Laden's private secretary for many years in Afghanistan and left Afghanistan in 2001. He was arrested by Iranian authorities and then handed over to the Yemenis two years later. Around 2002, during his time with the Iranians, he became the de-facto leader of al Qaeda's Yemeni operations after the previous leader was killed in a drone attack. His authority came from his close links with Bin Laden and he was confirmed as the leader by Ayman Al-Zawahiri (current leader of al-Qaeda). In February 2006, Nasir and 23 Yemeni terrorists escaped from a maximum prison in Sana'a. He was reportedly killed in Yemen on August 28th, 2011, but reports are that he is alive. Robert Worth of The New York Times profiled the group in a feature article, describing Nasir as a short man with small eyes, "laconic but quick-witted, with flashes of sarcastic humor and a remarkable ability to adduce Koranic verses to back up anything he said." According to Foreign Policy, "Wuhayshi has proven to be both a skilled politician and an innovative, often brutal, adversary." The Boston Globe's Gregory D. Johnsen in 2007 described him as emblematic of Al Qaeda's "younger, more radicalized members." On January 24, links went online for a 19-minute video from the new group titled “We Start from Here and We Will Meet at al-Aqsa.” (Al-Aqsa is an Islamic holy place on the Temple Mount in Jerusalem.) According to Stratfor (the global intelligence company): “The video threatens Muslim leaders in the region (whom it refers to as criminal tyrants), including Yemeni President Ali Abdullah Saleh, the Saudi royal family, and Egyptian President Hosni Mubarak. It also threatens so-called “crusader forces” supporting the regional Muslim leaders, and promises to carry the jihad from the Arabian Peninsula to Israel so as to liberate Muslim holy sites and brethren in Gaza.” Al Qaeda in the Arab Peninsula (AQAP) has clearly indicated a desire to attack the U.S., taking responsibility for underwear bomber Umar Farouk Abdulmutallab and, according to Abdulhakim Muhammad, backing his deadly assault at a military recruiting office in Little Rock. Nasir is responsible for the overall rise of AQAP, therefore, now with the death of Anwar al-Awlaki, we see an avenue for another al Qaeda leader's rise to prominance.