How influential is Muqtada al-Sadr and his Iranian ties?

September 13, 2011
Interesting Article: Moqtada al-Sadr orders halt to attacks on US troops stationed in Iraq: Cleric tells militias to stop operations until end of US withdrawal by Associated Press / Baghdad published Sunday, September 11, 2011
With US troops withdrawing from Iraq, what power vacuum will be left in Iraq? Who has the influence and power within the country to take over politically? What other regional players will come into the arena and change the  pro-US stance that we enjoy in Iraq today?


An interesting article by the Associated press spoke about an influential individual who has been a power player recently, and one that has been monitored by the west for many years. Muqtada al-Sadr, also known as "Sayyid" Muqtadā al-Ṣadr ("Sayyid" denotes males accepted as descendants of the Islamic prophet Muhammad through his grandsons, Hasan ibn Ali and Husain ibn Ali, sons of the prophet's daughter Fatima Zahra and his son-in-law Ali ibn Abi Talib. In the Arab world, it is the equivalent of the English word "liege-lord" or "master"). 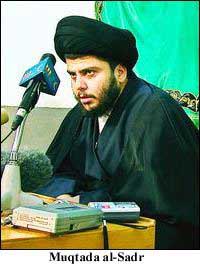