West Africa: Is this the new front in piracy?

23 crew members were taken hostage off the West African nation of Benin from a Cyprus-flagged vessel laden with oil as it was trying to transfer some of its cargo to a Norwegian-flagged vessel. The confrontations took place in the Gulf of Guinea, about 70 miles from Cotonou, the commercial capital of Benin. Will West Africa see an uptick in copycat piracy in the coming months? 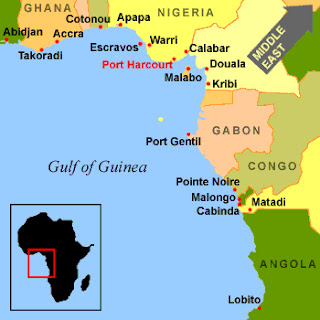 West African piracy seems to be the result of copycat endeavors by some resourceful groups seeing the success of their Somalian counterparts on the other side. Last month, Lloyd’s Market Association, a group of insurers in London, added the coastal waters off Benin and part of Nigeria to a high-risk category that also includes Somalia’s coast. The rise in Gulf of Guinea piracy seems to reflect a general increase in economic misery, as well as the emulation of actions created by successful Somali pirate groups, who have been able to exact millions of dollars in ransoms from shippers. Since May this year, there have been increasing reports of pirate attacks in the Gulf of Guinea and off the coast of West Africa. The incidents prompted the International Maritime Bureau’s Piracy Reporting Centre to issue a specific warning in June, citing eight attacks off Cotonou, Benin. The Gulf of Guinea is regarded as an important, emerging trade hub, spanning a dozen countries from the tip of Northwest Africa to Angola in the South. It is a valuable source of oil, and pirates in the region are currently targeting diesel and oil tankers in particular. This oil is ultimately destined for Europe and the USA, while some sources suggest that the USA will be receiving up to 25% of its oil supplies from the region by 2015. At its most basic, piracy off the coast of Somalia can be seen as having a clear root in economics and the inevitable outcome of a failed nation state dating back 20 years. Piracy or, more correctly, criminal attacks upon vessels in the Gulf of Guinea region are simply that: maritime banditry in an area insufficiently protected by the world’s navies. Intelligence sources on the ground are now seemingly acknowledging that the attacks in West Africa are very different in tone to their Somali counterparts. The Joint War Committee, which represents Lloyd’s of London underwriters and other insurers, extended a war-risk zone for Nigeria, Africa’s largest oil producer, and included waters off neighboring Benin and listed the areas as higher-risk for shipping. The Nigerian risk zone now extends to 200 nautical miles (230 miles) offshore. An immediate solution to the problems being experienced by seafarers in the area would not appear to be on the horizon. This, however, is a work in progress. In the meantime, the job of securing cargoes, crews and corporate reputations will likely fall upon the private security provider, meaning insurance discounts and a significant sense of relief in both boardrooms and bridges. The piracy in West Africa has a slightly different character, with pirates unlikely to hold on to ships for too long, preferring instead to steal the contents (including siphoning fuel into smaller tankers) and kidnapping crew for ransom. The Somali model usually involves holding the ship itself to ransom, along with the crew and is only possible thanks to the almost complete lack of government enforcement. West African piracy is likely to hit Nigeria and Benin hard. Nigeria’s Port of Lagos is one of the busiest in Africa, while Benin’s government receives an astonishing 40% of its revenue from its ports. There’s reason for nearby countries like South Africa to be concerned too; if both sides of the continent pose serious threats to shipping, the cost of shipping to and from the country might skyrocket due to increased insurance premiums, which would increase the price of all imported goods and make it a lot harder to export anything. The International Maritime Bureau's Piracy Reporting Centre said the year 2011 saw a total of 266 attacks in the first half of the year, up from 196 incidents in the same period last year. The piracy reporting centre said that in West Africa there were 12 attacks on tankers off Benin since March, an area where no incidents were reported in 2010. Five vessels were hijacked and forced to sail to unknown locations, where pirates ransacked and stole the vessel's equipment, and part of their product (oil cargoes). Just to compare: 50 incidents were recorded for Indonesia, Malaysia, Singapore Straits and the South China Seas in the first two quarters of 2011. Sailors taking the long way to the Mediterranean via Africa will be better to follow the trade winds and sail almost across the Atlantic before swinging back to Europe. Piracy is growing all over the region, and with the increased activities in West Africa, we see that it is not going away. Current shipping companies have to either work around this problem by sailing further out, or hiring professional maritime security companies to protect the vessels while they are in transit and moving their cargo.