Why is Waziristan the new front in fighting terrorism?

The Prime Minister of Pakistan, Yousaf Raza Giliani, recently assured the Chinese government that Pakistan was doing everything in its' power to eliminate any terrorist group based out of Waziristan. This comes after China blamed Islamic terrorists based in Pakistan for carrying out attacks in Urumqi, Kashgar and Khotan recently. China stated that Pakistan-based camps had been training Uighur insurgents, suspected of being part of the banned East Turkestan Islamic Movement (ETIM). The ETIM is a Waziri-based mujahedeen organization, with its stated goals being the independence of East Turkestan and the conversion of all Chinese people to Islam. The media, for the last couple of years, have covered many stories coming out of Waziristan and lately the numbers of drone attacks in the area have significantly risen. Now the question is why is Waziristan suddenly everyone's problem? 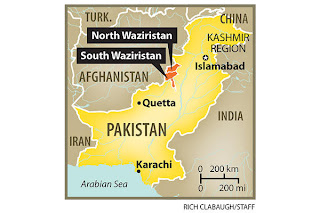