Where is Al Qaeda emerging lately?

September 26, 2011
Interesting article: The Long Arms of al Qaeda: The terror group is increasingly looking to its affiliates in the Arabian Peninsula and east Africa by ROBIN SIMCOX / Lodon published Monday, September 26, 2011
A recent article by Robin Simcox mentioned al Qaeda in the Sinai Peninsula as an emerging threat. Why are they emerging and will they be a security threat to the region? 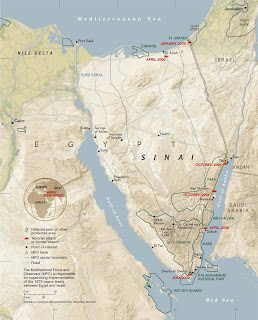 Al Qaeda seems to be reaching into areas that were once seen as progressive and relatively safe. The latest arm is called al Qaeda in the Sinai Peninsula (AQSP), the Sinai Peninsula (see map on right) was used as a base for recent terrorist attacks against Israel, and al Qaeda's Ayman al Zawahiri has praised the bombing of gas pipelines there that supplies Israel. While al Qaeda's central shura has yet to grant formal approval of a Sinai Peninsula franchise, the arrival of a new branch is disturbing news. The Sinai Peninsula (Sinai) is a triangular peninsula in Egypt situated between the Mediterranean Sea to the north, and the Red Sea to the south, and is the only part of Egyptian territory located in Asia as opposed to Africa, effectively serving as a land bridge between the two continents. Sinai has become a tourist destination due to its natural setting, rich coral reefs, and biblical history-Mount Sinai (It is mentioned many times in the Book of Exodus in the Torah and the Bible as well as the Quran. According to Jewish, Christian and Islamic tradition, the biblical Mount Sinai was the place where Moses received the Ten Commandments). According to the Jewish tradition the peninsula was crossed by the Israelites during The Exodus from Egypt as detailed in the Hebrew Bible. In 1979, Egypt and Israel signed a peace treaty in which Israel agreed to withdraw from the entirety of Sinai. Israel subsequently withdrew in several stages, ending in 1982. The Israeli pull-out involved dismantling almost all Israeli settlements, including the settlement of Yamit in north-eastern Sinai. The Treaty allows monitoring of the Sinai by the Multinational Force and Observers and limits the number of Egyptian military forces in the Peninsula. The most popular tourist destinations in Sinai are Mount Sinai and St. Catherine's Monastery, which is considered to be the oldest working Christian monastery in the world, and the beach resorts of Sharm el-Sheikh, Dahab, Nuweiba and Taba. Most tourists arrive through Eilat, Israel and the Taba Border Crossing, by train or bus from Cairo or by Ferry from Aqaba in Jordan. Historically, the Sinai has been beset by tribal disputes. It possesses a large native Bedouin population of approximately 360,000. Since the popular uprisings against Hosni Mubarak began, the Sinai has become an increasingly lawless area. The U.S. assessed that 200-300 prisoners were freed from Egyptian jails opened or abandoned in the wake of the uprisings, some of whom subsequently settled in the Sinai, bolstering extremist movements. Joint Palestinian-Egyptian terrorist cells went to the Sinai, seemingly assisted by local Bedouins. Salafist groups have now formed armed committees to settle tribal disputes and police stations have been attacked on multiple occasions. Following a recent attack on a police station in the Sinai, a pamphlet and video were produced containing the first ever word from this new organization called AQSP, they stated that they wanted a) An Islamic emirate in the Sinai, b) the introduction of Sharia law, c) the abolition of the Egypt–Israel peace treaty, d) Egyptian military intervention on behalf of Hamas in Gaza and e) An end to discrimination against the Bedouin population (the Bedouin tribesmen of the Sinai were well armed and already engaged in a low-level conflict with Egyptian authorities over a number of issues, including Bedouin smuggling activities). According to Robin Simcox, "This mix of jihadist ambitions and Bedouin grievances suggests that either segments of the Bedouin population have either been radicalized by AQ or sympathize with their goals; or, alternatively, AQ activists are deliberately courting the Bedouin, and highlighting issues that concern them for strategic reasons." The group has also been responsible for bombings on the pipeline that transports gas to Israel (The Egyptian-Israeli gas pipeline in the Sinai, a keystone of the economy, has been attacked five times), which means attacks against Israel and Israeli interests could become commonplace. The Bedouin tribes of the Sinai have long been alienated from the government in Cairo, which has favored tourism-development projects in the peninsula that hire Egyptians from the Nile heartland over locals. The $500 million pipeline is universally unpopular in Egypt because it trades gas with Israel and because many believe the Mubarak regime sold the gas at cheap prices in return for kickbacks. Some Bedouin are involved in smuggling into the Gaza Strip and have become partners with Hamas in breaking the siege. However, bombing gas pipelines affects not only Israel but also Syria and Jordan, both of whom import gas from Egypt. Since the Egyptian revolution in February, Egyptian police stations have been abandoned or attacked. At present, Sinai is divided into four military zones. Two are under Egyptian control, one is under Israeli control, and one is a demilitarized zone jointly controlled by Egyptian police and Multinational Force Observers. While the extent and role of a possible Al Qaeda presence in the Sinai remains uncertain, The Sinai is vast and rugged. Only a couple thousand Egyptian troops have been assigned to keep order and protect the natural gas pipeline in the aftermath of the revolution that deposed Mubarak. With the relative lack of security in the region and the fall of Egypt, we find al Qaeda emerging as a potent force in areas where we would not imagine their reach. Eventually, the organization will have a leadership role in the area, and we will see a fanatical leader emerge, though it is too early to predict the success of this new arm, we should pay close attention to this group as the months go by.